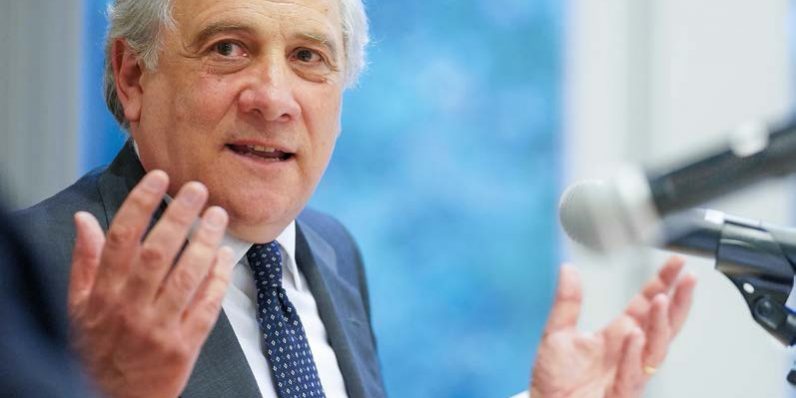 Interview with Antonio Tajani, President of the European Parliament, Brussels/Strasbourg

The interview was led by Hartmut Bühl and Nannette Cazaubon

“I believe that the next great achievement for the European Parliament will be to obtain true power of legislative initiative.” 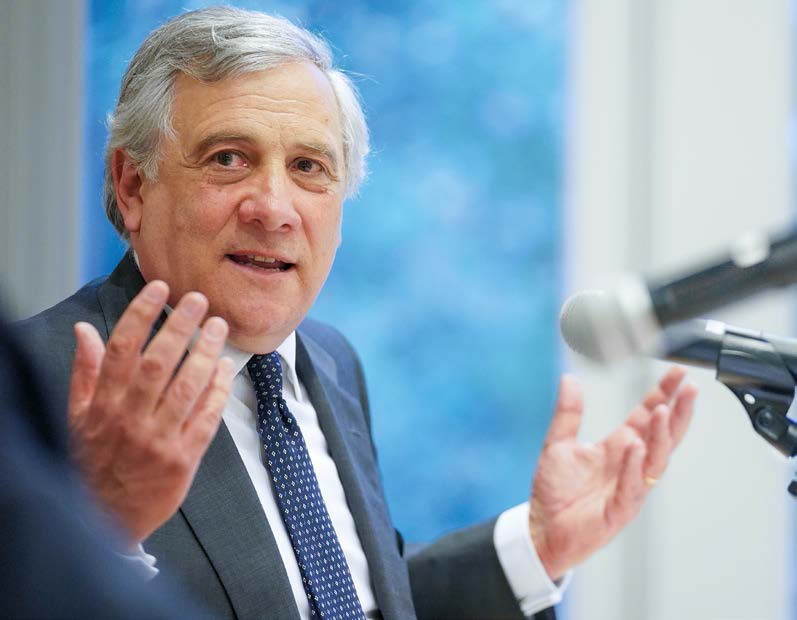 The European: President Tajani, you have served within the European Union for a long time. From 1994 to 2008, you were a Member of the European Parliament (EP). You became Commissioner for Transport in 2008 and, in 2010, Commissioner for Industry and Entrepreneurship and one of the four Vice-Presidents of the Commission. Re-elected as a Member of the EP in 2014 you became Vice-President of the Parliament in 2015 and you have been its President since 17 January 2017.
This impressing career leads me to my first question: when you remember your vision of Europe as a student, some decades ago, and you compare your ideas with the current status of Europe, what is the result?

Antonio Tajani: I do not see many differences; there is always room for improvement in a large project involving so many countries such as this one and it is why I will continue to fight for a stronger and better Europe. It is the same enthusiasm that I felt for Europe when I was younger that is pushing me now to run again for President of the European Parliament at such a delicate time.

The European: You mentioned a stronger and better Europe. With regard to challenges such as Brexit, trade wars, citizens’ protests and the emergence of nationalist movements: does a strong Europe mean that we have to review the course to be taken?

Antonio Tajani: A strong Europe is a united Europe, able to enact change in reasonable time, delivering concrete responses to our citizens’ concerns.

The European: If I understand you correctly, the real strength consists in the antithesis of violence and national egoism. Would you like to comment on my understanding?

Antonio Tajani: The European Union’s strength is enshrined in the Treaties. We must defend our values and the unique characteristics of the Member States that decided to come together at all costs. A sound economy and effective diplomacy are essential, but what really binds us together is our shared European identity.

The European: Let me turn to the Parliament and its influence on EU policies. In the triangle of the Brussels institutions, since the Parliament was directly elected for the first time in 1979, it has become stronger and stronger. We can mention for example the control over the EU budget obtained in 1977 and, in our days, the European Defence Fund.
Do you see other fields in which the Parliament as the representation of the political will of the European citizens might be strengthened?

Antonio Tajani: I believe that the next great achievement for the European Parliament will be to obtain true power of legislative initiative. Laws drafted by those elected to represent our Union’s 500 million citizens is one of the only ways to truly bring the EU closer to the people. It will not be easy, but it will have to be done if we want to hand over a more effective, accountable and democratic Europe to younger generations.

The European: Let us come back to the current situation and the challenges Europe is facing. The Romanian EU Presidency has chosen the motto “Cohesion, a common European value” for their programme. My feeling is that the lack of cohesion and the incapability of the EU to find a solution to the challenge of migration and refugees was detrimental to the EU and promoted populism in some European Member States. Couldn’t the Parliament be the appropriate institution to push for a solution to such issues by harmonising the differences between Member States?

Antonio Tajani: The European Parliament has shown that it is capable of delivering solutions. The lack of cohesion today manifests itself mainly in the European Council, where leaders of individual Member States often have the last word. An example of this is the delicate issue of asylum system reform on which Parliament has long since reached an agreement.

Antonio Tajani: This is not a problem, I am proud to be the President of a truly democratic Parliament that faithfully represents every one of our five hundred million citizens, from the most passionate pro-European to the most ardent sovereigntist. I believe that our aim must be to convince even the most sceptical citizens, that the only real sovereignty is ‘European sovereignty’. We have no alternative, in order to be able to make our voices heard loudly and clearly with other major powers, such as the United States, China and Russia. We must be united and put the common good before national interests.

“My main call is for everyone to vote.
We can agree or disagree, but our
democracy is based upon our most
sacred right and civic duty: voting.”
Antonio Tajani

The European: Our democratic system seems more and more threatened by disinformation and fake news. Do you fear the interference of such disinformation or cyberattacks on the upcoming European elections? What actions have been taken to avoid such interference?

Antonio Tajani: The threat is real, and we must learn from what happened in the United States, from the Cambridge Analytica scandal and perhaps even from the Brexit referendum. The European Parliament already has a dedicated task force and website, but more will be done shortly. We have the most advanced data protection system in the world, GDPR, and as soon as it is adopted by the Member States, the Copyright Directive will also help to combat fake news and encourage quality
journalism. In September, the European Commission proposed a package of measures to combat disinformation campaigns and defend the democratic legitimacy of elections. The aim, once again, is to create a network that connects the authorities of all Member States to be more effective in this difficult battle.

The European: What, then, is your appeal to the voters in May?

Antonio Tajani: My main call is for everyone to vote. We can agree or disagree, but our democracy is based upon our most sacred right and civic duty: voting. Without it, our democracy will wither and die like a flower. This cannot happen.

The European: President Tajani, thank you for this conversation and I wish the European Parliament every success for the next period.

Antonio Tajani MEP
has been President of the European Parliament (EP) since 17 January 2017. Born in Rome in 1953, he holds a degree in law from La Sapienza University in Rome. Mr Tajani was a professional journalist for more than twenty years. A co-founder of Forza Italia, in 1994, he was elected to the EP for the first time. He was appointed European Commissioner for Transport in 2008 and became Commissioner for Industry and Entrepreneurship in 2010. Mr Tajani was re-elected to the EP and as one of its vice-presidents in 2014.