The law that is inconvenient, but which protects 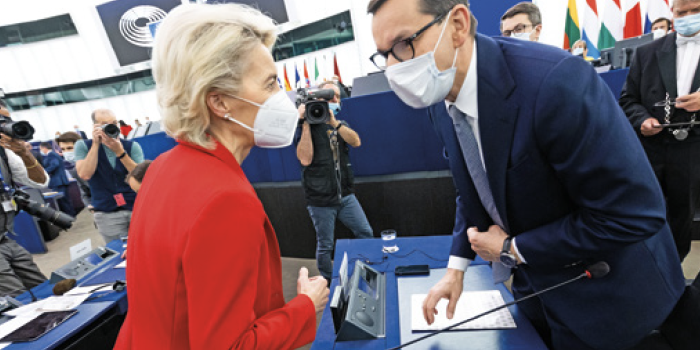 by Jean-Dominique Giuliani, President of the Robert Schuman Foundation, Paris

European judges are being criticised by European populists for undermining the “legal sovereignty” of EU member states. The law has become an electoral issue and the most far-fetched promises and assertions flourish in the public debate. Two courts are now at issue: the European Court of Human Rights (ECHR), which judges the conformity of the European Convention on Human Rights that entered into force in 1953 and applies to the 47 member states of the Council of Europe, and the Court of Justice of the European Union (CJEU), which judges the conformity of the acts of the European institutions and the 27 member states with the European treaties. Both of these courts can be called upon by states and individuals. The judgments of the ECHR are binding on states, while those of the CJEU are binding on states and their national courts, for which it also interprets common rules.

The Polish constitutional court recently took the lead in challenging the primacy of EU law and thus the jurisdiction of the CJEU, on the grounds that certain provisions of the treaties and the court’s decisions were contrary to the Polish constitution. Elsewhere in Europe, in such cases, an amendment to the constitution is put forward. Not in Poland, where only the most archaic nationalism supports a majority that has run out of steam. The Polish government constantly uses the European Union as a scapegoat. There is nothing European about its nationalism. Yet it says it does not want to leave the EU. One can understand why: 80% of Poles feel European.

The German constitutional court had for a moment flirted with the same line of reasoning, worrying the partners of the continent’s largest economy. But as is often the case in Germany, a sense of negotiation and compromise prevailed and… the composition of the court changed.

In France, the approach of the presidential election has triggered the demagogy of those who advocate a ‘constitutional shield’ or the primacy of national law over European law. We have even seen a former European commissioner dare to propose an exception to the primacy of European law, for immigration, which has become – alas – the favourite theme of politicians, but fortunately not of the French!

Treaties are inferior to constitutions

If treaties are superior to laws, they are inferior to constitutions. Whatever the usual critics of European integration may say, they respect the “constitutional identity of the States”. This is even explicitly stated in the text of Article 4 of the Treaty on European Union. If a state chooses to sign a treaty or agree to a European text, it must undertake to apply it and, if necessary, to adapt its constitution or legislation. This is the way to ensure reciprocity from its partners.

These treaties strengthen individual and collective rights. They protect citizens, including from their own governments or national laws that threaten their freedoms. This is obviously a problem in an age of mass electronic surveillance and national withdrawal.

Attacking judges rather than the laws they interpret is a serious mistake. This is what autocratic regimes, such as Russia or Turkey, usually do, refusing to implement decisions that protect their opponents.

In these debates, what is at stake is the protection of Human Rights in the strictest sense of the word (not “human rights” which do not exist any more than do “inhuman rights”). They should be addressed only with infinite caution, and it is dangerous to offer them up for electoral debate. Europe has been built by law, because in its history it has experienced force and coercion rather too much. It will resist through law, which is still its citizens’ greatest achievement.

For if the law is sometimes inconvenient, it more often than not protects!

Defending the rule of law in the EU

(Ed/nc, Paris) On 19th October in Strasbourg, the European Parliament had a heated plenary debate with Poland’s Prime Minister Mateusz Morawiecki on the contentious verdict of Poland’s Constitutional Tribunal of 7th October stating that cornerstone provisions of the Treaty on the EU (Art. 1 and 19) are unconstitutional under Polish law. A majority of MEPs condemned this ruling and called into question the independence of the court itself. They warned that the Polish government has taken a regressive path towards totalitarianism.

On behalf of the Slovenian EU Presidency, Foreign Affairs Minister Anže Logar took part in the debate and stated that the primacy of EU law is the foundation of the EU. The rule of law is indeed one of the fundamental values upon which the EU is based and to which all EU countries voluntarily agree when they join the Union. The rule of law guarantees fundamental rights and values, and allows the application of EU law. It means that governments should be bound by law, that they should not take arbitrary decisions and that citizens should be able to challenge their actions in independent courts.

Commission President Ursula von der Leyen also participated in the plenary debate and said: “The ruling of the Polish Constitutional Court puts into question the foundation of the EU and is a direct challenge to the unity of the European legal order.” She underlined that “it is the first time that a court from a member state finds the EU treaties incompatible with a national constitution”.

Polish Prime Minister Mateusz Morawiecki said that “the primacy of EU law does not extend to the constitutional system” and he added that “the Polish Constitution is the highest legal act in Poland; it stands above any other principle of law”.

The European Parliament called on the Commission to act immediately to defend Polish citizens and the foundations of EU law, by triggering the conditionality mechanism (enabling the EU to stop funding governments that disrespect values such as the rule of law) and launching infringement procedures. MEPs also asked the Council to act in accordance with Article 7 TEU (allowing for the suspension of voting rights in case of a ’serious and persistent breach’ of EU values by an EU country).

Some MEPs, however, criticised the EU institutions, saying they are worrying about the independence of the judiciary and separation of powers only in certain member states and arguing that the primacy of EU law is used to give more powers to the Union than it is originally defined in the treaties.