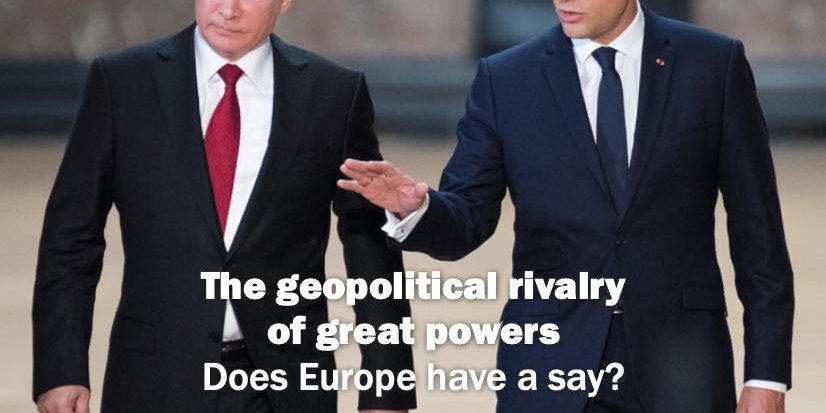 2021 was marked by the hope that the Covid-19 pandemic could be brought under control throughout the world. There was also hope that the newly elected the US Presi­dent could restore order to the world after his predecessor had wreaked havoc internationally and attempted in his own country, with the storming of Congress by his radical supporters on 6th January, to override the democratic process, usurp the office of president and present himself as the saviour of the US.

At the start of this new year however, it is clear that the pandemic is still not under control, that the virus is not only causing suffering worldwide, but that our societies also face critical infrastructure breakdowns due to staff shortages. A further source of concern is that the longer the pandemic lasts, the longer disrupted supply chains will hold back global economic recovery and prosperity.

On the global stage, it is clear too that the US President has not yet been able to fulfil the hopes placed in him for the restoration of the world order, while Europe continues to wonder what America really wants and what the US can still achieve as a partner and an ally.

There is no realistic prospect of a return to normal for the time being, especially as 2022 will see emerging trends taking clearer shape in the world order.

In Europe, there are growing concerns about future stability, as alarming events in global politics increase and multiply. They could lead to armed conflicts of international proportion.

The world’s foremost military and economic power, the US, has, for the past decade, been withdrawing from its self-imposed role as the global regulator. Afghanistan in August 2021 was a moment of truth that has reinforced the existing mistrust of Washington, even under a new President.

China and Russia have taken advantage of these weaknesses to openly demonstrate their intentions to annex Taiwan and Ukraine respectively. As such goals can only be achieved by force, they create uncertainty worldwide.

In relation to Putin, it is mainly Europe and NATO that are on the front line, whereas in the Indo-Pacific region, the US is in the process of a strategic reorientation by gaining new regional allies. A region in which Europe is not needed militarily.

New strategic equilibria and counterweights will emerge. Europe should concentrate on its strategic tasks in its own vicinity, including Africa and the Middle East and, together with, or in addition to, the Atlantic Alliance, defend stability in such a way as to relieve pressure on the US and leave it freer to focus on its agenda in the Indo-Pacific region.

New instabilities are emerging in the Middle East, where Iran’s government – after the unilateral decision of the US to terminate the nuclear agreement (JCPOA) in 2015 – is escaping from the oversight of the International Atomic Energy Agency (IAEA). Iran will shortly be able to wind up its uranium enrichment programme and produce its own nuclear weapons, threatening Israel as well as the whole of the Middle East and provoking a new proliferation crisis, as it will be an incentive for the Sunni Arab states like Saudi Arabia but also Turkey, to build their own nuclear weapons.

And what about Europe? Its misfortune is its lack of room for manoeuvre in the new powerplay of the great powers. Europe alone cannot protect its geopolitical interests, let alone enforce them. It is not enough for Europe to be powerful economically, it must also become powerful politically and militarily. As the old world order crumbles, there is no other way for Europe to guarantee its interests and security than through its own strength and suitable allies. Europe will become strong if it can play its cards skilfully vis-à-vis the US and NATO, but also Russia, and not buckle under Chinese pressure. Europe must now avoid any marginalisation in geopolitics and prove itself! At this very moment, Member States are joining forces in diplomacy to prevent war in Europe.