France and Germany – so far apart and yet so close 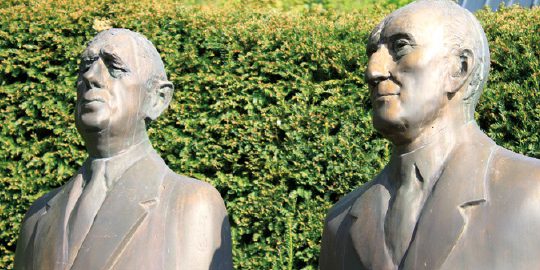 There is no alternative to the Franco-German tandem

When the new French President was elected in 2017, the German weekly Der Spiegel devoted its front page to him, with the title “Teurer Freund”, “dear friend”, in the sense of “expensive friend”, and this comment: “Emmanuel Macron saves Europe… and Germany must pay.”[1] Years before on 24th July 2013, the French daily Newspaper Le Monde published an article entitled “Germany, an egoist economic power”, a theme taken up by the weekly Le Point on 28th September 2021, in a free opinion “Let’s get out of the illusion of the Franco-German couple”, with a subtitle “German egoism.” “Farness” and “closeness” are indeed features of the Franco-German relationship.

France, proud of its seat on the UN Security Council, its nuclear force, its expedition-experienced armed forces, the influence due to its language and its history as the nation of Enlightenment, Revolution and Human Rights, looks to the vast world. France has a special view toward Africa and thanks to its ultramarine territories – its Exclusive Economic Zone (EEZ) with nearly 11 million km² under total jurisdiction is missing only a few km² to the United States’ EEZ – France has interest in all oceans and has a special view toward Africa.

Germany, only a nation-state since 1871, had there after a turbulent history, shaped by the 12 years of Hitler’s murderous dictatorship from 1933 to 1945. Today it is an advanced democracy, deeply anchored in the population. Its foreign policy is oriented towards the continent, especially central and eastern Europe, where its interests are historically based. Proud of the reconstruction of their country from ruins at the end of the Second World War, Germans are still working to find cohesion among their population after the reunification in 1990 of the separated country. They believe in the strength of their economy with strong small and medium enterprises (SMEs), the Mittelstand as the backbone of German economy, much envied in France. This Mittelstand allows Germany to be one of the world’s leading exporting powers. Germans see themselves as the main industrial nation of Europe and praise the “Made in Germany”.

The trade relations between France and Germany show an important imbalance, detrimental to the first. The same applies to the employment situation. But there are French capabilities balancing these lacks. For example, French demography is more dynamic with a younger population. The banking system is stronger, and the country has long coasts along the Atlantic and the Mediterranean.

Germans are easily irritated by the claims of France sometimes ironically called “the Great Nation”, unable to put its accounts in order. The French on their side like to criticise, together with some other Europeans countries, the German economic policy, considered as short-sighted, not using its budgetary capacities and drawing the benefits of the single market and the euro zone without thinking of returning to other countries.

In the institutional fields there are indeed major discrepancies. Germans believe in their federal system with the 16 Länder not being mere regions, but federated states, each with their own cultural capital and a complete government with ministers and financial authority. The regime is parliamentary, with parties fiercely discussing a government contract, which will have to be respected, and a Bundestag in Berlin, closely controlling the government and its commitments abroad, especially military. Decentralisation is rooted in the organisation of the country.

The French Republic is unitary and, although regionalised, the State remains well present in the administration of the territory. The governance of the country is dominated, except in times of “cohabitation” when the prime minister comes from another party, by the President of the Republic, endowed with a vast power, to launch for example external military operations.

However, France also shows flexibility: in budgetary management, French flexibility is opposed to German rigor, but in corporate governance, participation rights (Mitbestimmung) – where in Germany employee representatives participate in the management of companies – face a French system that is struggling, despite progress, to get out of the confrontation between employers reluctant to share power and unions that are not all reformists.

The life of society reflects these contrasts of the culture of consensus in Germany and in France rather that of confrontation, the object of an ambiguous judgment of the Germans: a criticism of the inclination to strike and the lack of discipline, combined with admiration for the ability of the French not to bow to authority and to defend freedoms.

Stereotypes live in popular culture. Germans are inclined to say : “Die Franzosen arbeiten, um zu leben und wir leben um zu arbeiten”, (The French work to live, we live to work), they will criticise French frivolity, but will immediately add, envious and admiring:  “Leben wie Gott in Frankreich”, (Live like God in France!) and they admire French elegance and songs, they dream of Paris and its lights. The Frenchman, on the contrary, will smile at “Germanic heaviness”, but will praise “Germanic seriousness and rigor.” When the French love greatness, the German favour caution, if the French wants to be a creator, the German makes sure to maintain what he has built.

The Merkel-Macron dialogue has shown these divergent traits: prudence and a culture of consensus from the first, acceptance of confrontation and the idea of embodying a great nation from the second; annoyance of the French partner at German slowness, irritation of the German at French ardor. There is no shortage of subjects of disagreement: the place of nuclear power in the energy transition, the future of the Stability and Growth Pact, the EU’s collective indebtedness, relations with the United States and definition of European sovereignty.

Temptations leading to distance exist indeed: the German to get closer to frugal northern Europe and to listen to central Europe, even sovereigntist; the French to a closer understanding with southern Europe, as evidenced by the agreement of the Mediterranean (2008) which sees France in a leading role and the Quirinal Treaty of November 2021 with Italy.

Paving the way to Europe’s unity

And yet! The miracle of European peace is the fruit of
Franco-German reconciliation, images of which are imprinted in the collective imagination: De Gaulle and Adenauer at the Mass for Peace in Reims Cathedral in 1962, then signing the Elysée Treaty in January 1963; Schmidt and Giscard d’Estaing, living symbols of Franco-German friendship; Kohl and Mitterrand’s handshake in Verdun in 1984.

The links between the French and German leaders, their constant consultation in tandem, are unique in relations between nations. These ties have been further strengthened by the Treaty of Aachen, concluded in January 2019 in the city where Europe’s first unifier, Charlemagne, whose empire gave birth to both France and Germany, rests. A joint parliamentary assembly was formed in 2020 and set to work.

Europe’s major advances, such as the single market and the euro, come from the Franco-German duo. It was the Macron-Merkel agreement in May 2020 that paved the way for the European recovery plan and the issuance of community bonds, a fiscal revolution for the EU. And behind this plan, the new German Chancellor, Olaf Scholz, pushed – then as Merkel’s finance minister – to realise it, completely changing Germany’s finance doctrine. Despite their differences on many issues, Merkel and Macron worked to consolidate the Euro during the current health crisis. In armament cooperation they launched projects such as the fighter jet of the future – a programme Spain has joined – which are decisive for Europe’s security and defence.

Looking positively to the future is justified

The November coalition contract of Berlin, between the SPD (social democrats), the Bündnis90/Die Grünen (greens) and the FDP (liberals), refers less to the special relationship with France than the previous one of 2018 of the grand coalition. It proclaims, as is the tradition, the centrality of the transatlantic partnership. However, by affirming Germany’s European anchoring and the ambition of a European “strategic sovereignty”, by committing to a true security and defence policy in Europe, by deeming it possible to make faster progress with the voluntary states, by aiming to complete the banking  union, by evoking the flexibility of the Stability Pact, by considering transnational lists and the extension of qualified majority voting, including for external affairs and defence, it opens up prospects for new collaborations in the spirit of Macron’s Sorbonne speech of 2017, “for a sovereign, united and democratic Europe”.

When the journalists of the German weekly DIE ZEIT asked Olaf Scholz: “Where will your first trip abroad take you?”, he answered without any hesitation: “To Paris”, and he added: “The friendship between Germany and France is the basis for the success of cooperation within the European Union as a whole.”[2]

At this first visit the new German Chancellor confirmed that he had understood the essence of President Macron’s speech at the Sorbonne in 2017. And the young German Foreign Minister of the Greens, Annalena Baerbock, declared in the French capital that the consequence of European sovereignty is that there must be a state! She was in line with the coalition contract that calls for the further development of a European federal state. It is improbable that France and other European countries would go as far. In any case, the dialogue is reset with an overture the French government wasn’t waiting for! The dialogue will continue between these two fundamental countries for the progress of Europe.

In truth, there is no alternative to the Franco-German tandem. It is through its constant dialogue, even if it is not always easy, that initiatives are born and that crises, these engines of European construction, can be managed. Simply, this tandem must be able to expand its one-on-one to other partners, so that the concerns of all parts of the continent are considered. This is one of the angles from which the Franco-Italian treaty can be analysed.

We believe in a saying in Brussels, that “there is no need for fear about the Union when the tandem of France and Germany is doing fine.”