“The Union must be in the driving seat!” 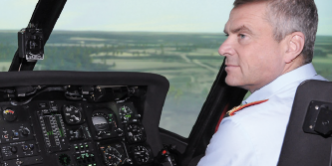 In a telephone conference, we asked Dipl-Ing, Major General (ret), Reinhard Wolski, Moderator of The Berlin Security Conference, to take a stand on some of the developments in the EU’s security and defence policy and major armament developments.

Nannette Cazaubon: General, the EU High Representative and Vice- President of the European Commission, Josep Borrell has made a proposal to enable the EU to better react to crises with its military capabilities by building on an operational Intervention Force of 5000 military personnel. What should be the criteria for the deployment of such a force, that should replace the current system of battlegroups?

Reinhard Wolski: Thank you for inviting me to this telephone conference. My answers will reflect my personal views. Indeed, what would be the criteria? Certainly, it is not only international crisis management operations that should be in the remit of this force. As we observed in Kabul in August, but also in Somalia in 1993, so called “Peace Support Missions” require the full spectrum of political, strategic, and operational willingness to commit forces to high-density war operations… and the will to commit a combat force. The political and legal framework for committing such a force at EU level should include crisis management operations, but also rapid reaction operations wherever needed in the defence of Europe – possibly as a first responder. The Union must be in the driving seat in this decision making!

Nanette Cazaubon: What needs to be included in such a construct to make it fully operational?

Reinhard Wolski: We know that terrorist groups, non-state actors or other non-combatant potential adversaries (eg organised crime, freedom fighters acting across national borders to raise money…) enjoy high-tech weapons and force multipliers, such as cyberspace capabilities, Unmanned Systems (UAS) etc.  So, the 5000 men/women strong force must be equipped and trained for multi-domain operations.  This would include a resilient, powerful Command and Control (C2) system, fully digitised and standardised for the whole force, Intelligence, Surveillance, and Reconnaissance (ISR) capabilities that range from tactical and operational assets (eg drones, reconnaissance and attack helicopters, radar sensors) to the access to “reach back” strategic EU intelligence, such as satellite and human intelligence – without “national caveats”! In terms of impacts, this force requires non-kinetic and kinetic capabilities with direct and indirect firing, electronic and cyber warfare capabilities, air power and strategic communications to cover the area of responsibility. I think that is clear enough.

Hartmut Bühl: This force would therefore need the whole spectrum of land force capabilities. But what about strategic and operational mobility and logistical support?

Reinhard Wolski:  Strategic and operational mobility is the condition sine qua non for each operation. The air and sea transport facilities have to be contributed by the Union and, if necessary, supported by NATO (Berlin Agreement 1994). Tactical mobility in the theatre has to be guaranteed by a proper composition of the force. For the support functions, high mobility is a must:  by air (the most crucial of course), by ship, by rail and by road. Basically, all equipment – including indirect firing weapon systems – must be able to be flown into the theatre.  Logistics and medical support must be flexible, standardised and “just in time” – but resilient.

Hartmut Bühl: Such a force should have the same or at least interoperable equipment as far as possible. This is not feasible at the moment. Of highest importance for the next decades are the Future Combat Air System/ FCAS (France, Germany and Spain) and the Main Ground Combat System/ MGCS (France and Germany). There are always political risks in cooperation, but what technology and engineering risks do you see in these two programmes?

Reinhard Wolski: To be very frank, I hope that FCAS will not be a “money burning” machine for European nations, eating up resources needed for other services. We have to keep everything in balance. Only a balanced development of land capabilities, naval, air and cyberspace forces can provide full spectrum dominance.  FCAS will remain one element for joint operations.

Hartmut Bühl: But what are the stakes for this air combat system?

Reinhard Wolski: The stakes are high:  after the US F-35, this will be the next level up of air combat systems, 6th generation (nobody knows yet what it will be really capable of…).  Companies involved are seeking to regain technological supremacy in terms of Manned-Unmanned-Teaming, Combat Clouds, Artificial Intelligence, including other military and civilian spin-offs. For me, the manned fighter aircraft belonging to the Next Generation Weapons System (NGWS) is also well placed for export, whereas the Remote Carrier (RC) and the resilient Combat Cloud (CL) with data rates >250 Mbit/s between aircraft close to or above supersonic speed will bear the greatest development risk.

Nannette Cazaubon: But the UK, together with some EU Member States, is developing the “Tempest”, a combat aircraft which seems to have much the same military requirements…

Reinhard Wolski: What really strikes me, and you are right, is that the “Tempest” Strike Aircraft is being developed by the UK, Italy and Sweden in parallel. To be quite frank, having these developments in parallel in Europe is not sensible. I would even say that it is politically irresponsible.

Nannette Cazaubon: Do you see any solution, apart from one group running out of money?

Reinhard Wolski:  That would be a very bad outcome indeed, because too much money would already have been burned. My proposal is that OCCAR* should bring the two concepts together. These two programmes have to be reviewed in order to streamline and optimise European High-Tech military aviation projects and make them affordable.

Hartmut Bühl: It seems, that the Main Ground Combat system (MGCS) is less complicated and therefore fraught with fewer risks.

Reinhard Wolski: I do hope so. The MGCS will not be a pure successor to the Leopard 2 A7V and the Leclerc Main Battle Tank (MBT), but a system of systems including sensor-to-shooter capabilities, teaming with unmanned ground systems, self-protection also against drones and other smart ammunitions. It is ambitious but technologically, it is far less complicated of course than the FACS. Politically, it might still be risky. We need to assess what the role of heavy armour is likely to be in the future. A “technology demonstrator” will show what capabilities will be needed and how integrated a system it should be.

Nannette Cazaubon: Could you imagine that other Member States would join these two programmes or would it be wise to keep the number of “actors” to a minimum?

Reinhard Wolski:  Concerning the MGCS, other European nations are looking for a successor to Leopard 2. In view of the progress, complexity and costs of the programme, France and Germany should be seeking participation from other nations, while ruling out additional national requirements and complexity of course.

Regarding the FCAS, I am still not convinced that other nations will buy into the project, especially in the face of competition from the “Tempest” programme already in place.

And, by the way, we certainly need a European “Future Combat Rotary Wing System” (FCRWS) for dominance in the lower airspace, attack helicopters teaming with UAVs.

Hartmut Bühl: General, thank you for answering our questions.