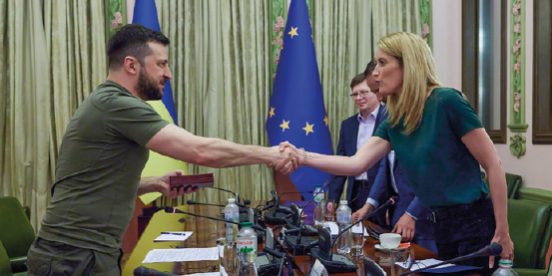 24th February this year marks a turning point in European as well as global security. With its illegal and unprovoked attack against Ukraine, Russia’s dictator Putin did not only bring war – including tremendous human suffering – back to Europe, but he also endangered the rules-based international order. 77 years after the end of the second world war, Russia’s invasion of Ukraine seems like a dark shadow of a time we all believed had been overcome, thus jeopardising the core principle of the international system: the prohibition of the use of force in international relations. To prevent an erosion of this principle is why Russia must not be allowed to win this war or achieve any gain from it. Even partial success of such an act of aggression could encourage Putin to go further and would set a dangerous precedent for others, most notably China. Furthermore, Putin’s war aims at a Ukraine that decided to pursue the European path, the path of freedom and democracy that threatens Putin’s increasingly totalitarian system. Accordingly, the community of liberal democracies is called upon to defend our values and to deny Putin a victory by any means necessary short of direct military confrontation.

The west was not prepared…
At the same time, Russia’s readiness to pursue its goal by means of force raises for us Europeans the question of our preparedness to defend ourselves against possible further aggressions. We might not always be as lucky as to have an American president on our side who is as committed to defending Ukraine as the current one. This war on our eastern border therefore once again illustrates the urgent need to concretely work for a real European Defence Union! In order to achieve it, we need to combine the political will of the Member States as already expressed in multifold initiatives with a financial commitment to such a common European defence. If we look at these financial commitments, we can observe that 2014, the year of Russia’s illegal annexation of Crimea, marked a turning point in EU Member States’ defence spending, reversing the trend of declining defence budgets. At that time, NATO members agreed to the well-known 2% goal which also functions as an informal benchmark for the EU. In 2021, only 10 of the 27 EU Member States spent 2% on defence with the major European military players, France, Germany, Italy and Spain, still falling short. While there has been an increase in defence spending since 2014, we have witnessed at the same time that defence investments were mostly done at national level, thus only achieving limited added value to the overall European defence and barely any cost-efficient solutions. According to recent data of the European Defence Agency (EDA) on 11 EU Member States, only 11% of defence investments in 2020 were done in common projects while the agreed benchmark is 35%. Also, at the end of 2020, when the multiannual financial framework was adopted, the EU Member States decided to substantially reduce the envisaged budget lines for EU defence initiatives, most visibly in the project on Military Mobility that aims at improving the deployability of forces throughout Europe and was cut by 74% to €1.5bn.

…but finally reacted
Putin’s attack on Ukraine and the threat to Europe led EU Member States to new financial pledges to increase their defence with the German Chancellor’s announcement of a special fund for the German Bundeswehr of €100bn three days after the attack being the most prominent one. In total, the additional budget commitments for defence of EU Member States amounts to about €200bn over the coming years. The decisive question is how that money is going to be spent. Looking at Germany, the discussion on purchasing the Israeli air defence Arrow 3 quickly illustrated that national reflexes remain, as this system would not contribute to an overall European air defence but would even create zones of different security, especially at the eastern flank.
Against this backdrop, the recent proposals of the European Commission to close the gap between the EU’s research and development activities within the European Defence Fund (EDF) and procurement aim in the right direction. However, doubts remain as to what extent co-financing joint procurement will be possible under the current treaty. Therefore, a new European convention following the results of the Conference on the Future of Europe is absolutely necessary to revise the existing treaty in order to allow for EU financing of joint procurement. In the meantime, the existing budget lines for Military Mobility and the EDF need to be increased and the EU Member States need to entirely fulfil their commitments within PESCO as well as to include the results of the Coordinated Annual Review on Defence in their national defence planning.
Regarding the translation of financial commitments into effective action, the Strategic Compass provides an important step forward. However, its core element, the Rapid Deployment Capacity (RDC), a brigade-size highly deployable force, remains short of what is needed for a capable European Defence Union in light of the current circumstances. Derived from the EU’s experience of incapability and helplessness during the evacuation in Afghanistan in 2021 and drawing on the (less successful) concept of the EU Battlegroups with rotating decentralised troop provision, the RDC does not meet the requirements of our changed security environment. The current threat calls for a much more ambitious approach by designing this force as a permanent structure with the soldiers being stationed and trained together while the provision of the necessary high-end equipment for such a force is ensured. For such an approach, the existing treaty even offers some space to manoeuvre. Article 41 (3) of the Treaty on European Union offers the possibility to EU Member States to set up a start-up fund for preparatory activities related to EU crisis management. Lacking a clear definition, the term “preparatory” could be interpreted in a broader sense allowing for the financing of such a force. This approach could draw on the PESCO Project EUFOR Crisis Response Operation Core that aims at creating a full spectrum force package. The participating Member States; Austria, Cyprus, France, Germany, Greece, Italy, the Netherlands and Spain could move forward in setting up that fund with other EU Member States gradually joining. Finally, in the course of a treaty revision, this fund should be integrated in the EU budget and its scope should also be extended to cover collective defence as laid out in Article 42 (7) of the treaty.

Towards a real European Defence Union
Such an approach would provide a significant progress towards a real European Defence Union in a two-fold way: on the one hand and even without a treaty revision, it would ensure the long-term provision of such a force by the EU Member States committing to it through the permanent allocation of financial means and personnel. On the other hand, such a structure could be further extended by adding additional brigades, thus in the end reaching the long-proclaimed capability goal of 60,000 deployable soldiers.
In light of the most threatening crisis we have faced in Europe since 1945, we are required to take bold steps forward. We can no longer primarily organise our defence along national lines. Only by working closely together within a real European Defence Union will we be able to defend ourselves. And some day we might even be forced to do that without the United States.