Global stability through the EU’s neighbourhood and enlargement policies: Exporting stability or importing instability – this is the question 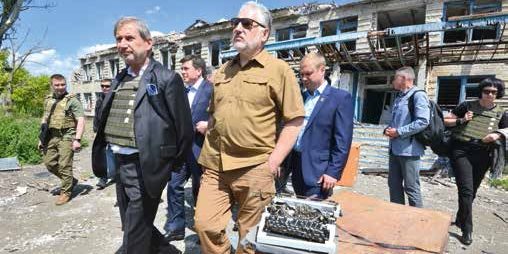 “Europe’s prosperity and security cannot be entirely separated from that of its neighbours.”

We live in uncertain times. Our continent has experienced multiple crises in the last few years, the effects of which are still ongoing; the financial crisis, the migration crisis, the conflicts in Syria, Libya and Ukraine to name but a few. Add to this the threat posed by terrorist and criminal networks, and it becomes clear that Europe´s prosperity and security cannot be entirely separated from that of its neighbours. It is fairer, easier – and far more cost-effective – to actively help our neighbours become more resilient. The European Union’s Neighbourhood and Enlargement policies lie at the core of these efforts. 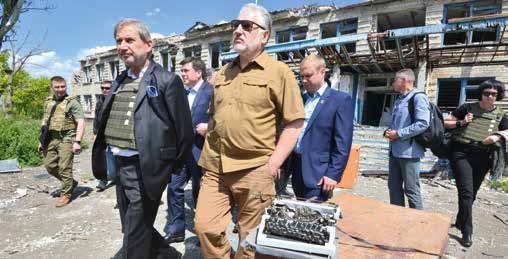 Information visit of EU Commissioner Hahn (left) to the region near the “line of contact”, Eastern Ukraine Photo: European Commission

These two policies are intrinsically linked. Their overall objective is achieving stability at Europe’s borders, by helping neighbouring countries develop stable democratic institutions and, at the same time, to become more prosperous. We believe that placing emphasis on the establishment and proper functioning of democratic institutions, a strong and active civil society and economic reforms which boost investment, jobs and growth is a game changer for any society. This concept underlines also the relevance of both the European neighbourhood and enlargement policies for the European Union. You could sum it up in one sentence: we have the choice of exporting stability or importing instability. The decision is clear and we are implementing it through cooperation with our neighbours, be it candidate countries or partner countries in our neighbourhood. When it comes to enlargement policy, the accession perspective is a major incentive driving reform processes. It is very much in our own interest to help transform these countries. By working on reforms with our partners, we create security, stability and prosperity for both, them and ourselves. Our commitment and the countries’ own efforts are already paying off. For example, Serbia and Montenegro are moving ahead with their accession negotiations and the former Yugoslav Republic of Macedonia has finally overcome its political crisis with overall fair elections and the formation of a new government.
Stronger joint ownership and more flexibility Let us now focus on the EU’s neighbourhood policy: in 2015, we carried out a major review, which resulted in a new approach that ensured stronger joint ownership and more flexibility by recognising the different aspirations and diversity of our 16 partner countries. The reviewed neighbourhood policy provides all the necessary tools to reach out to partner countries on key issues such as good governance, rule of law, democracy and human rights; economic development (including trade, employment, transport and connectivity, energy security and climate action); security; migration and mobility. As with the enlargement countries, the EU’s interest is in the stabilisation of its wider neighbourhood in political, socio-economic and security-related terms. This includes addressing the root causes of the migration crisis and conflicts. This will also work towards the goals of the EU Global Strategy which emphasises the importance of furthering state and societal resilience in the EU’s broader neighbourhood.

Economic development is key for stability

Lack of economic opportunities is often at the heart of instability. That is why the EU has flagged economic development as a key priority. This includes work on economic governance, improving the business environment (including property rights, dispute resolution mechanisms and commercial courts which aid stability and promote growth) and job creation, especially for youth. Measures such as these encourage trade and investment, both domestic and foreign, as well as stronger economic integration with the EU. The EU also facilitates energy connectivity and transport between the EU and ENP partners, a further source of economic gain as well as stability for all parties concerned.

Security is one of the central issues that emerged as a priority from the ENP review. Conflicts in our wider neighbourhood have a strong impact on the EU, and threaten our own stability. It is for this reason that we have redoubled our efforts to counter terrorist threats, prevent radicalisation, disrupt organised crime, fight cybercrime and ensure effective border management. Given the specific security challenges the region is facing, we are placing emphasis on security sector reform and on working with Member States to develop effective and transparent institutions in partner countries. In the same vein, we’re looking at more efficient forms of defence integration within the EU. The threats that the EU faces have no borders. Their scale is increasing and they are best tackled by working together. We have therefore launched the European Defence Fund, which will create incentives for Member States to cooperate on joint research, development and acquisition of defence equipment and technology. And looking to the future, we have produced a detailed reflection paper with different options for how the European Union at 27 might develop by 2025 in the area of defence.

Tackling the root causes of migration

Finally, in response to the European migration crisis, we have increased cooperation and partnership with our neighbours. We created two trust funds to enable quick mobilisation of funding: the EU Trust Fund in response to the Syrian Crisis and the EU Trust Fund (EUTF) for Africa. €767 million have already been committed under the EUTF Syria to increase resilience and self-reliance of refugees and host communities displaced as a result of the Syrian crisis. A Facility for Refugees in Turkey was established in 2016 through which three €3 billion have been committed for 2016 and 2017 to support refugees and host communities in Turkey by enhancing access to livelihoods, education and improved infrastructure, amongst other means of assistance. Access to education and job opportunities have also been the focus of our activities in Jordan and Lebanon, countries with whom we have signed compacts to provide concrete help to refugees and their host communities. And our efforts don’t stop there. In line with our overarching aim to prevent the tragic loss of lives in the Mediterranean, we’re stepping up actions and cooperation to combat smuggling and break its business model at sea, on the coast, inside Libya and throughout the region. Lastly, the European External Investment Plan for Africa and EU Neighbourhood Countries is a new initiative that brings a new focus on boosting investments in the region. One of its functions will be addressing the root causes of irregular migration and forced displacement. It is through helping our partners on all these fronts, creating the right conditions for their citizens to pursue a dignified, stable and secure life that we can ensure our own stability and resilience. The stakes have never been so high, both for us, and the region.

Johannes Hahn has been European Commissioner for European Neighbourhood Policy (ENP) and Enlargement Negotiations since 2014. He obtained his doctorate in philosophy from the University of Vienna in 1987 and joined the Austrian Managers Association as secretary general followed by managerial functions in different areas of Austrian industry. In 1992, Mr Hahn was appointed executive director of the Austrian’s People Party. Between 1996 and 2003, he was a member of the Vienna regional parliament and afterwards a member of the Vienna regional government before becoming Minister for Science and Research in 2007. In the previous term, Mr Hahn was European Commissioner for Regional Policy.