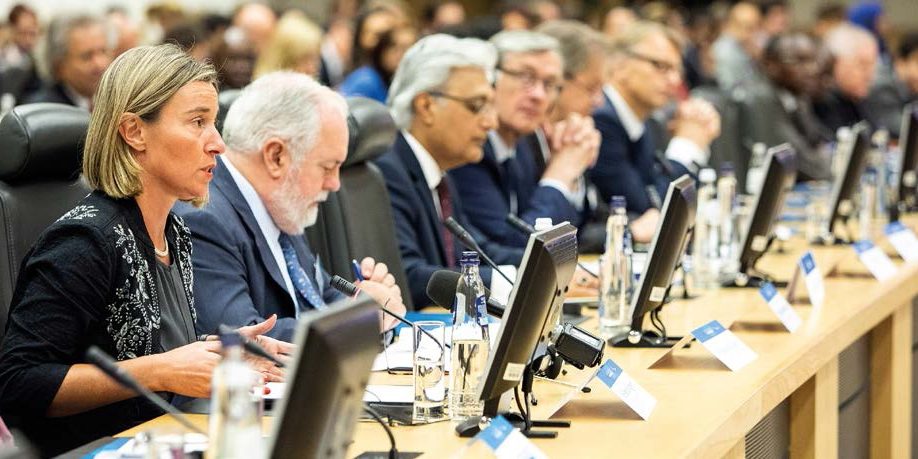 “Climate change is clearly not a conventional security threat and addressing it will require a comprehensive and integrated approach, across all levels of governance.”

From drought-damaged harvests to vanishing coastlines, adverse climate change impacts are already being felt across the world, and pressures on our planet are increasing. Climate change can multiply threats in the field of peace and security – recent years show that extreme weather, resource scarcity and food production volatility can exacerbate local and regional tensions, leading to conflict, migration and global security
consequences.

The European Union (EU) has been at the forefront of global climate action for many years. Reducing greenhouse gas (GHG) emissions and transforming our economy are top priorities for the current European Commission, while we are also working hard to make our economies and societies sustainable and resilient to climate change impacts.
2018 is a crucial year for global climate action. In 2015, the Paris Agreement parties agreed to finalise detailed rules for implementing the landmark deal by the end of this year. Parties face the tough task of adopting this Paris ‘rulebook’ at the COP24 summit in December in Katowice, Poland. Clear and comprehensive rules are vital for turning our shared commitment and vision into real collective action – and it is in the interest of all sides, developed and developing countries alike and most of all those most vulnerable to climate change.
Since the Paris Agreement, the EU has worked hard to lay the foundations for achieving our pledge to reduce GHG emissions by at least 40% by 2030 compared to 1990. To meet this goal and our 2030 targets on renewables and energy efficiency, the EU has drawn up a comprehensive package of policies and measures across the whole economy, including a reform of the EU emissions trading system (EU ETS) and 2030 targets for all EU Member States to reduce emissions in sectors outside the EU ETS including transport, buildings and agriculture. Our 2030 climate and energy framework is not just about meeting targets, it is about enabling Europe to capitalise on the economic and social opportunities offered by the low-carbon transition. And we are not only looking to 2030 – it is part of our vision to make the EU a true low-carbon economy by 2050. At the request of EU leaders, the Commission will put forward a proposal for a new EU long-term strategy for reducing emissions later this year.

The ability to adapt to climate change

Alongside reducing GHG emissions, the EU is committed to increasing our ability to adapt to climate change. The severe heat waves and forest fires that hit southern Europe last summer are a stark reminder of the importance of preparing for climate change. The EU Adaptation Strategy of 2013 encourages adaptation action at national, regional and local levels, provides guidance and information for Member States and tracks progress, as well as promoting EU funding for adaptation measures. 25 Member States now have a national adaptation strategy and thousands of cities across Europe have committed to climate action, with adaptation as a growing element. Climate action is also now integrated into all major EU funding programmes.
A forthcoming evaluation of the EU strategy will allow us to assess its implementation and reflect on lessons learned, with a view to increasing resilience at all levels. EU action on climate change does not stop at our borders. The EU and its Member States are fully committed to achieving the objectives of the Paris Agreement and the 2030 Agenda for Sustainable Development. Since the US administration announced its intention to withdraw from the agreement, we have stepped up policy dialogue and cooperation with all global partners, as well as continuing to support mitigation and adaptation measures, including capacity-building and technology transfer for countries most in need. Together, the EU and its Member States are the biggest providers of climate finance, supplying over  20 billion in 2016 alone.

Climate action and climate diplomacy are key components of wider EU external action and cooperation. EU leaders recently vowed to address the destabilising effects and risks of climate change and the nexus between climate change and security in policy dialogue, conflict prevention, development and humanitarian action and disaster risk strategies. The EU continues to promote global action on this issue through the G7, G20 and all UN systems, and has urged the UN Security Council to increase its focus on the climate-security nexus.
The EU’s Global Strategy for foreign and security policy states that while security and defence are essential for giving the EU a credible role in the world, their full strength and value are only fulfilled when deployed alongside other policies with important external aspects, including climate. Climate change is also one of ten risk factors included in the EU’s Conflict Early Warning System. The importance of policy and operational linkages between climate and security was the subject of a recent high-level conference hosted by EU High Representative for Foreign Affairs and Security Policy, Federica Mogherini. The event of 22 June brought together politicians, experts and civil society to discuss ongoing and emerging threats posed by climate change and ways forward to safeguard these linkages, in Europe and worldwide.

Well-designed development and humanitarian programmes can also help states and communities to build economic, governance, and social capacities and improve resilience to climate-related shocks. The EU has aligned its development objectives with the 2030 Sustainable Development Agenda and played a key role in the adoption of the Sendai Framework for Disaster Risk Reduction. To increase climate resilience in local communities worldwide, non-state actors have a key role to play. They know the local context and know which adaptation actions can best contribute to building resilience. The EU is a strong and active supporter of the Global Covenant of Mayors for Climate and Energy, the world’s biggest coalition of cities and local governments committed to ambitious climate mitigation and adaptation action.
Climate change is clearly not a conventional security threat and addressing it will require a comprehensive and integrated approach, across all levels of governance. Its adverse effects are already a harsh reality today – and left unchallenged they could not only undo the development improvements made so far, but pose a fundamental threat to our future peace and prosperity. The EU is as committed as ever to working with all partners and stakeholders to make the global journey towards sustainable and climate-resilient societies a successful and inclusive one.

Prior to his current role he was Deputy-Director General of DG Trade (from 2014). He has served as Chief Negotiator for the EU-Canada Comprehensive Economic and Trade Agreement (CETA), the EU-Vietnam Free Trade Agreement and the EU-Japan Economic Partnership Agreement.