The Under2 Coalition: how climate protection should work 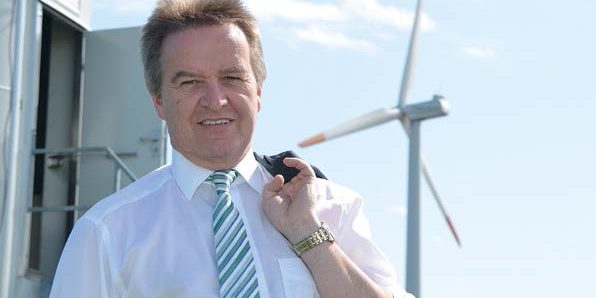 Interview with Franz Untersteller MdL, Minister of Environment, Climate and the Energy Sector of Baden-Württemberg, Stuttgart

The interview was conducted by Editor-in-Chief Hartmut Bühl 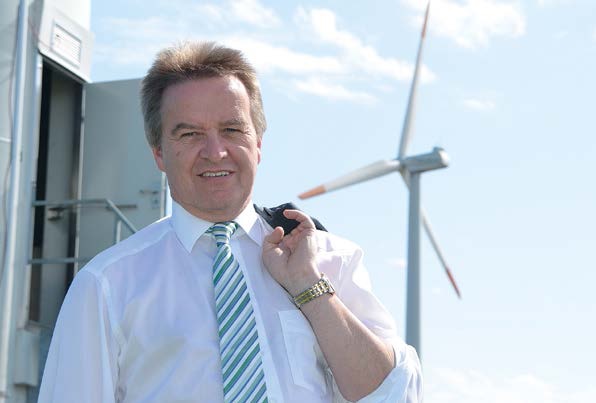 The European: Minister, it is a pleasure to have this opportunity to talk with you here in Stuttgart. On the way here, I
was listening to a report on the radio about diminishing hopes of reducing CO2 emissions in the US if Trump is re-elected. But the report also mentioned legislation in California requiring solar systems in all new-build construction. Isn’t that a contradiction?
What is your view and how can we achieve the Paris climate conference (COP21) targets in spite of Trump?

Franz Untersteller: Trump is certainly not of help when it comes to protecting the climate, but his importance should not be overestimated. Alternative energies are up and running in North America and are rapidly gathering momentum. A dozen states and provinces, including California, Ontario and Washington State, have made a very strong commitment to combating climate change by implementing effective measures, as have many large cities such as New York, San Francisco and Los Angeles.
Ultimately, the choice between energy production technologies that protect or damage the climate depends on cost. In California, electricity can be generated from  renewables at unbeatable cost.  So I am virtually certain that emissions will decline in the US despite Trump. He may of course be  elected for a second four-year term – but then again he may not. We shall see.

The European: Thank you for explaining your views so clearly. Let me delve a bit deeper: the Under2 Coalition is the first global association and network of subnational and regional organisations working on climate change. You and California Governor Edmund G. (Jerry) Brown were the inventors of the Initiative back in 2015. What are your goals and how do you plan to proceed?

Franz Untersteller: Luckily I had the honour to meet Governor Jerry Brown at the opening of the Intersolar event in San Francisco in 2014. At the time, we were both worried about the upcoming 2015 COP21 conference. I broached the idea that the international community could get together at subnational level to put evidence-based political pressure on national governments. Jerry Brown was receptive to the idea and so we decided that Baden Württemberg and California should set the ball rolling. We did so in 2015 and hoped to drum up enough support for our initiative before the Paris conference in December 2015. The governor said we should aim for 100 members of the Under2 Coalition. I thought that was bit too optimistic, but he turned out to be right!

The European: So how did you go about it? 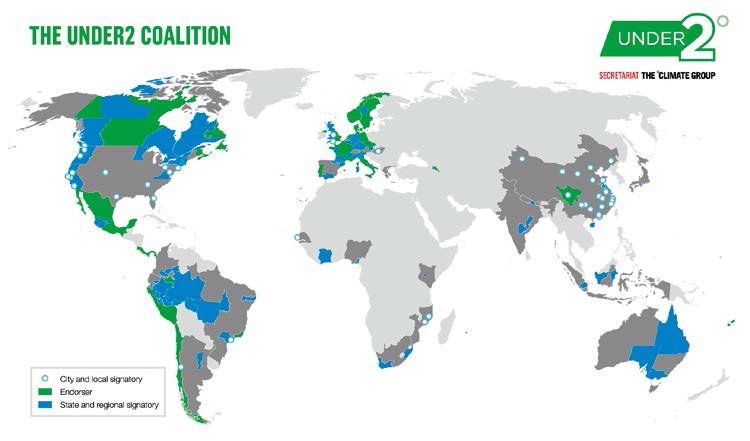 Franz Untersteller: We drew up a Memorandum of Understanding (MOU) in June 2015. We deliberately avoided prescribing one single list of measures to be taken by all signatories, and accommodated
the very different shapes and sizes of our members – regions, provinces, counties and cities – by leaving it up to them to decide individually what action to take. Each member simply commits to reducing its local or regional CO2 emissions to less than 2 tons per capita per annum – as the name Under2 implies – or to cut emissions by 80-95% from 1990 levels between now and 2050, according to its  own methods. The only obligation in the MOU is to report on activities and results.

The European: And how many members were you able to recruit when you started out? Who are they?

Franz Untersteller: By the time of the COP21 in Paris, we already had well  over 100 members and we now have 206 on six continents accounting for  1.3 billion people and 40% of global GDP. In addition to California and Baden-Württemberg,  our members now include several states in the US, twelve states in Mexico,  and in Europe above all the province of Catalonia.

The European: Minister, to be successful, political lobbying has to be carried out by an entity of some kind. Who is in charge of that?

Franz Untersteller: The Climate Group in London, an experienced NGO,  handles organisational matters as secretariat to the Under2 Coalition. The system works very well!

Franz Untersteller: Our policy action is relatively straightforward. We focus on three main themes:
1. Reporting and Measuring,
2. Verification, in other words comparing our experience,
3. Information concerning suitable systems, to encourage recommendations for solutions and incentive programs.

The European: And where do you get your funding?

Franz Untersteller: That is a very important issue. Our funding comes  mainly from subnational governments themselves through voluntary contribution, from national governments such as the International Climate Initiative run by the  German Federal Government, state governments, such as Baden-Wurttemberg in Germany, and foundations, particularly in the US, such as the Rockefeller Brothers Fund.  We have also made a lot of progress on institutional funding.

The European: Does the Under2 Coalition have a representative to the Commission in Brussels?

Franz Untersteller: I am delighted to report that I had the pleasure of opening an office in March of this year right next to the European Institutions. It is located in the offices of the Baden-Württemberg Representation in Brussels, and it is up and running.

The European: Congratulations! I am happy that your state government has decided to support your cause. It’s very encouraging to see that the Under2 Coalition has set things in motion by focusing on concrete evidence and shared responsibilities, but how do you assess the overall policy impact so far?

Franz Untersteller: Clearly, actual decisions are taken by national governments. But by making recommendations we can put pressure on governments to move in the right direction. The more compelling the evidence we produce, the greater our impact. We take an active part in conferences at various levels – regional, national and international – and our work is well regarded.

The European: What are your strengths?

Franz Untersteller: Our evidence based approach and our focus on innovative change.

Franz Untersteller: Yes, energy is one of our main focuses, and there can be no development without energy. There are already many success stories in the field of renewable energies, but there is enormous scope for further progress.

The European: To me, development policy has to include climate policy. But what we are seeing in Africa, Asia and Latin America is that we Europeans are exporting our centralised power generation systems to developing countries. Large overhead lines are being built over the heads of populations, mostly without providing them with electricity. Most of the remote areas in these continents have hardly any access to electric power, even though industry could provide it and in doing so, replace environmentally harmful diesel generators.

The European: I take it that would mean abandoning the strategy of central power supply as a tool for development policy?

The European: Is that not an area where the Under2 Coalition could make a useful contribution?

Franz Untersteller: Just remember that 20 years ago Germany had 450 power plants of all types and now there are 1.6 million generation units. Today, consumers can also be energy producers.
In addition, the revolutionary law on renewable energies has made alternative generation systems highly competitive in terms of price. Taking the same approach in the developing countries would give them an enormous opportunity to generate cheap electricity efficiently.

The European: And what about their contribution to combating climate change?

Franz Untersteller: In the developing countries, micro-grids using wind and solar generation and battery storage to generate and distribute electricity 24 hours a day can – and I hope will – not only make life better for the people who live there but also make an appreciable contribution to combating climate change.

Franz Untersteller: Yes, EnBW is a good example. It is a company I know well. EnBW found itself in a very tight spot a few years ago but it managed to change course. Back then, it had 50% nuclear generation in its portfolio and at the same time it was having to phase out its coal-fired power plants. Management, led by Frank Mastiaux, recognised the challenge in time and made a determined push towards generating power from renewable sources. In addition, the company has invested in grids and has an outstanding customer focus. EnBW has made a great success of the energy transition!

The European: Minister, this interview began unconventionally. May I be allowed to end it provocatively?

The European: Do you consider that nuclear energy and climate protection are two sides of the same coin or is nuclear an absolute no-go?

Franz Untersteller: As far as I am concerned, nuclear energy has always been, and still is, a risky technology. We only have to think of Three Mile Island, Chernobyl and Fukushima. Whole swathes of land were made uninhabitable. They still are. Nuclear accidents have caused immeasurable suffering. On top of that, spent fuel that will be radioactive for the next thousand years is being deposited in intermediate storage facilities around the world. Even in Germany, a technologically sophisticated country, we won’t have a final storage facility until 2035. Given what we know now therefore, I think the idea of building new nuclear plants is misguided, especially since nuclear generation is more costly than generation from renewables. So for all these reasons, nuclear is a no-go for me.

The European: Minister, thank you for this candid conversation. I wish you all the best in your work as environment minister and as one of the founders of the Under2 Coalition.