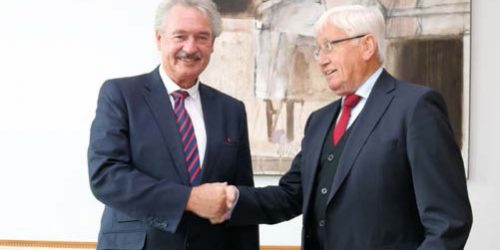 Interview with Jean Asselborn, Minister of Foreign and European Affairs/Minister of Immigration and Asylum, Luxembourg

The interview was conducted by Editor-in-Chief Hartmut Bühl.

”The instrumentalisation of the debate about migration is the most visible sign of a wider rift among EU Member States, which is mostly about the values the EU is based on.” 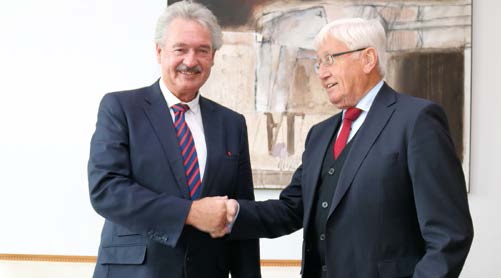 The European: Minister, back in 2015, when the numbers of refugees fleeing through the Balkans were at their highest, you wrote an article for this magazine entitled “Migration: Drawing up robust solutions” and said: “Solidarity and responsibility must remain the cornerstones of such common European action.” Is that statement still valid today?

Jean Asselborn: Indeed, we learn from Europe’s history that solidarity and responsibility were the driving forces of the European integration process. Without these cornerstones, we would not have gone through a successful enlargement process. Without responsibility or solidarity, there is no mutual trust between Member States. This is sadly what we are experiencing at the moment, especially in the field of migration. Some Member States make their national egoisms prevail over the global EU interest. They want to benefit from the EU, but without sharing the burden. Can you explain why migrants should stay in Italy, Greece and Spain, but not in other Member States?

The European: I certainly cannot! Especially considering that the concept of burden-sharing has a long tradition and was not invented during the refugee crisis of 2015.

Jean Asselborn: You are right. Burden-sharing in the EU was already applied with the shared responsibility to protect refugees in situations of mass influx. The preamble to the United Nations Convention of 1951 states that granting asylum ”may place unduly heavy burdens on certain countries”, implying the need for international cooperation.

Jean Asselborn: …indeed, and in order to share the burden internally at a national level, some of them have even elaborated distribution systems nationally. Austria, Belgium, Denmark, Germany, the Netherlands, Sweden, and the UK have introduced asylum seeker distribution schemes in their regions. My question is: what has been introduced at national levels and why should it not inspire our work at an EU level? Especially since the European Court of Justice has validated from a legal point of view the concept of relocation as a proportionate measure to alleviate the burden on first entry Member States under great pressure.

The European: Is this only a question of solidarity between Member States?

Jean Asselborn: Within the Union, solidarity is very present in the Treaties as it is referred to six times in the Treaty of the European Union (TEU)  and six times in the Treaty of the functioning of the EU (TFEU). Article 2 of the TEU mentions solidarity as a characteristic of European society while the promotion of “solidarity between Member States” is one of the aims of the Union, as listed in Article 3.3 TEU. Moreover, I think that responsibility and solidarity are not a matter of political choice but a matter of political necessity. The Schengen area is one of the greatest achievements of the European Union.

The European: Schengen means free movement of people and goods…

Jean Asselborn: …without Schengen there is no free movement! Without free movement, there is no economic prosperity! Schengen is an essential part of the European project and the most appreciated by European citizens. In an area of free movement, external borders are common borders. Today in the EU, we share over 50,000 kilometres of external borders. A security or migratory problem in one Member State, or at its external border, potentially affects all the others. That is why Schengen has put into place a set of compensating measures, ranging from border control standards to police and criminal judicial cooperation. However, without a distribution system, the burden is unfair for the Member States of first entry.

The European: Would dismantling Schengen entail a huge impact on peoples’ daily lives?

Jean Asselborn: It would, and currently, we are witnessing that Schengen cannot work if there is no responsibility (not putting into practice the Schengen rules) and no solidarity (solidarity measures towards the Member States of first entry). The result is a lack of mutual trust and national initiatives reinstating internal border controls.

The European: Do you believe that the reintroduction of internal border controls might become a normal situation?

Jean Asselborn: Hopefully not. Almost two years ago, the Commission presented a roadmap to bring Schengen back to normal. More than two years later, the normal functioning of Schengen is far from being a reality. If we want to protect the Schengen area, we need responsibility and solidarity from all Member States. If some of them do not play the game, then Schengen risks falling apart or becoming a smaller entity.

Jean Asselborn: The European Council, in its conclusions of 28- 29 June 2018, invited the Council and the Commission to swiftly explore the concept of ”regional disembarkation platforms”, in close cooperation with relevant third countries, as well as the United Nations High Commissioner for Refugees (UNHCR) and the International Organisation for Migration (IOM). The European Council has equally called for the establishment in parallel, on a voluntary basis, of ”controlled centres” on EU territory with full EU support, in order to ensure a rapid and secure processing of migrants saved and disembarked in the EU. Until now, we had only made progress on a theoretical basis. We know what those centres could look like based on the joint UNHCR and IOM “proposal for a regional cooperative arrangement ensuring predictable disembarkation and subsequent processing of persons rescued-at-sea”. Putting these concepts into reality is another thing.

The European: What is hindering the realisation of these concepts?

Jean Asselborn: First, we are in a chicken and egg situation when European leaders meet African leaders. Europeans expect Africans to prevent departures and Africans expect Europeans to receive migrants and to share the burden internally. But who shall do what at which moment? Secondly, the link between new avenues for legal migration and cooperation in readmission puts this intercontinental partnership under tension. The spirit of the 2015 Valetta Summit incorporates this link but until now, the EU has achieved almost nothing regarding legal migration and many African partners are still reluctant to cooperate swiftly in the field of readmission. In this context, the debate on the location of a controlled centre in Spain is quite premature. Spain was the first supporter of the concept of controlled centres, and indeed Spain could set up some kind of pilot project. Nevertheless, the EU must do more than this. Migratory routes are volatile, and every Member States should take its part of the burden.

The European: What could be the key towards success?

Jean Asselborn: Success always depends on whether the EU will find an answer to the following question: what happens to the people that are received on disembarkation platforms or in controlled centres, regardless of the semantics? The case of Niger can be seen as a regional test to protect and host people in need of international protection. However, to be able to cope with the incoming people from the sub-Saharan region, Niger needs to be able to rely on resettlement, financial and social support from the EU. I regret the incoherence of some politicians who for years have been asking for the flows to be stemmed at departure in third countries. Political correctness would entail that they are also ready to contribute when it comes to resettlement and legal avenues.

The European: In the midst of this debate in Europe, the American President announced at the end of 2017 that he would withdraw from the Global Compact for a Safe, Orderly and Regular Migration – also called Global Compact for Migration (GCM) – which is based on the 2016 New York Declaration. Hungary and Austria also announced that they will not sign the GCM in December 2018 at the intergovernmental conference in Marrakech. What does that mean for the future of this compact and its impact on Europe?

Jean Asselborn: It did not really come as a surprise that the Trump administration withdrew from the GCM on the eve of the stocktaking conference in Puerto Vallarta in December 2017. What saddens me more from a European perspective is the attitude of Hungary that was uncooperative throughout the technical negotiations, preventing a common European position, just to withdraw officially from the process a week after those negotiations had been finalised in July 2018. As for Austria, it has openly overstepped its role as an “honest broker” in its capacity as acting EU Presidency by letting its own national agenda rule over the need to achieve a consensus among the EU 27.

The European: Isn’t this a bad situation for the EU before Marrakech?

Jean Asselborn: Since a few other EU Member States have declared that they are reluctant to adopt the GCM, the position of the EU as such has of course been weakened. That said, the overwhelming majority of partners will be at the international conference in Marrakech in December and approve the text. This is quite an achievement, the first time that a UN document addresses migration issues in its own right, with a follow-up mechanism that will allow for deeper and more concrete cooperation on an international level. As Louise Arbour, the UN Secretary General special envoy for migration, has said: “This is a beginning rather than an end.”

The European: What worries me is that the debate about refugees and migrants is increasingly dominated by populist rhetoric and that the human beings who are at the heart of this debate are being forgotten for the sake of electoral gain. The New York Declaration embodies the humanistic approach, in line with European values. Can the EU withstand the strain for much longer if individual countries opt out of our system of values?

Jean Asselborn: The instrumentalisation of the debate about migration is the most visible sign of a wider rift among EU Member States, which is mostly about the values the EU is based on. Some countries, mostly in Central and Eastern Europe, would like to see a less united and more nationalistic and intergovernmental approach, trying to roll back some of the main achievements in integration that the EU has achieved over the last decades.

The European: Roll back – what would be the consequences of this?

Jean Asselborn: This rollback would go hand in hand with a curtailing of civil liberties and be a blow to the “citizen’s Europe” as well. We can see examples of this authoritarian approach in Hungary and Poland, those Member States where article 7 has been triggered. We need to come back to a less confrontational style if we don’t want to put the European construction as such at risk. Human rights and our common established values are non-negotiable. But I am afraid that the populist rhetoric will surge even more the closer we come to the date of the elections for the European Parliament.

The European: Minister, thank you very much for this interview.

Jean Asselborn has been Minister of Foreign Affairs and Minister for Immigration and Asylum in the Luxembourg Government since 2004. Born in 1949, he joined the municipal administration of the City of Luxembourg in 1968. In 1976, he became the administrator of the intercommunal Hospital of Steinfort, a position he held until 2004. After obtaining a master’s degree in private law from the University of Nancy II in 1981, he became the mayor of Steinfort and served in that position until 2004. From 2004 to 2013, Mr Asselborn served as Deputy Prime Minister and Minister of Foreign Affairs and Immigration under Prime Minister Jean-Claude Juncker.