Effective development aid through coherent and concrete projects – There can be no security without development, nor development without security

“Our work is driven by the promotion and respect of EU values and principles, such as democracy, the rule of law, the universality and indivisibility of human rights and fundamental freedoms.” 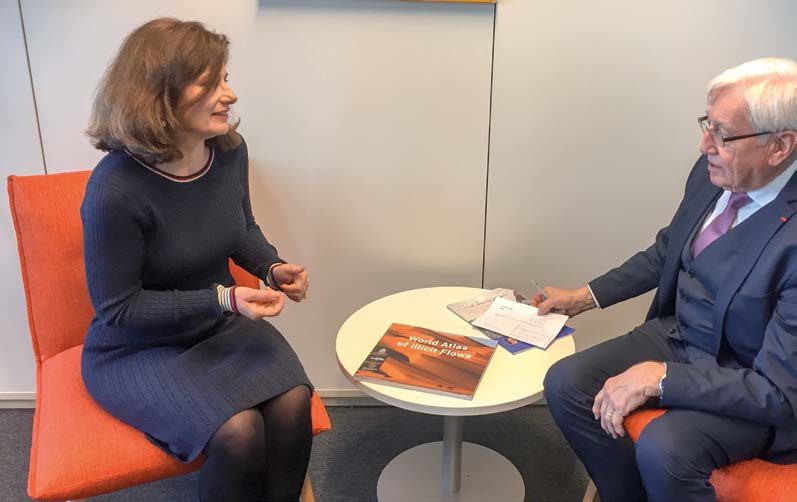 The European: Ms Geiger, in the Directorate General (DG) for International Cooperation and Development (DEVCO), you are the Director responsible for People and Peace and Human and Society Development. What are the guiding principles of your mission?

Henriette Geiger: Our main purpose is to engage with countries all over the world while bringing added value to the European
Union. Focusing on the UN 2030 Agenda and its Sustainable Development Goals (SDGs) and their role in EU international cooperation and development policy, the Directorate General is
responsible for formulating EU development cooperation policy and sectoral policies. This means ensuring cooperation with partner countries but also with local players like large cities, which play a major role in many countries and are often the main victims of climate change, conflicts, terrorism and other global threats.

The European: What are the convictions that underpin your action?

Henriette Geiger: The underlying objective of our work is to promote the EU’s fundamental values of democracy, the rule of law and the universality and indivisibility of human rights and fundamental freedoms. Human rights are integral to effective work on poverty alleviation and conflict resolution, in addition to being an essential bulwark against extremism.

The European: You mentioned that your mission is based on concertation with Member States and other strategic partners. What is your experience in this respect?

Henriette Geiger: The European Commission is an EU institution which aims to promote the interests of EU Member States while at the same time engaging with strategic partners. In the security area, my officials are working with many global partners such as those of the UN family (WHO, IAEA, OIE, UNSCR 1540, Biological and Chemical Weapons conventions – BWC and CWC), the US, Japan, Canada and other mission-based or regional organisations (OSCE, OPCW, ASEAN, African Union).
We have close consultations with NATO on issues of common civil-military interest, such as counter-terrorism, cybersecurity, hybrid threats or CBRN security. Another organisation we are cooperating with is the International Science and Technology Centre (ISTC) in Astana.

The European: What is the added value for the EU to be represented in the ISTC?

Henriette Geiger: The ISTC, which is based in Astana (Kazakhstan), is an intergovernmental organisation co-funded by the EU, the US, Japan, South Korea and other global partners. Under the umbrella of the ISTC, cooperation and capacity building activities on security matters are discussed and initiated under a co-funding mechanism. Examples are water security in Central Asia or secure uranium transport in Central Africa. Such cost-effective and flexible mechanisms provide mutual information exchange with strategic partners in sensitive areas and reinforce multilateral and regional cooperation.

The European: One of your actions is to engage in cooperation with third countries in order to address global threats. In your view, what are the major threats we are talking about?

Henriette Geiger: One of the biggest global threats nowadays is of course climate change, which poses a considerable risk to global security. Others relate to terrorism, the rise of violent extremism, organised crime, misuse of chemical, biological or radio-nuclear materials (CBRN), attacks against IT systems and critical infrastructure. The emergence of new plant-animal- human diseases or pandemics, aggravated by climate change and migration, cross-border industrial accidents like Fukushima or Seveso and the increased occurrence of natural disasters, are emerging threats that pose new challenges.

The European: You definitely see close links to security?

Henriette Geiger: Yes, let’s consider a few examples of climate change or water security to illustrate how they are intrinsically linked. Climate change is a threat multiplier, which exacerbates conflicts and population migrations. Early warning and prevention measures are needed to help promote good neighbourly relations aimed at reducing tensions over limited natural resources. Our knowledge base can be increased through targeted public awareness campaigns to ensure that people become more aware of climate-induced security implications and spill-over effects. One of our new actions in 2019 will be to engage Central Asia, a strategic area that can be a shield against illicit drug trafficking, radicalisation and terrorism, and a region crucial for EU security. The purpose of this action is to establish an integrated approach to climate induced security challenges and create development opportunities that will be resilient to climate risks. This will also contribute to the EU’s overall development and global commitments such as Clean Water and Sanitation, Climate Action and Peace, Justice and Strong Institutions.

The European: And your example for water and security?

Henriette Geiger: This is a very complex issue. In the fertile basins of the Amu Darya (Uzbekistan) and Syr Darya (Kazakhstan) rivers, the watersheds have become exposed to new threats linked to climate change: melting ice from glaciers has started to release huge quantities of highly toxic or radioactive waste originating from the former Soviet Union’s uranium mining industry. Our ongoing cooperation programmes in this region, through the Instruments contributing to Stability and Peace (IcSP) and the Instruments for Nuclear Safety (INSC) help to address these emerging security challenges in close cooperation with partner countries and the international community.

The European: What about access to potable water in cities?

Henriette Geiger: In terms of water security and access to safe and secure drinking water, large urban areas are also facing the new challenges of ageing infrastructure or poor protection of their reservoirs. To give you an example, many reservoirs are located in the open air and are therefore difficult to protect against intentional poisoning. Many big cities in emerging countries also suffer from water scarcity, which slows their development.

The European: And in arid regions in the Middle East and the Gulf, huge investments are being planned to build nuclear power stations generating electricity to produce drinking water through desalination.

Henriette Geiger: Yes, indeed. Even if it is safe and based on modern technologies, producing drinking water from seawater is highly energy-intensive. These nuclear power stations will require appropriate safeguards, safety and security governance mechanisms, such as regional early warning systems to detect CBRN contamination, as they may be targets for acts of terrorism or cause Fukushima or Chernobyl type accidents.

The European: You mentioned CBRN (chemical, biological, radiological and nuclear) threats as one of the crucial issues. How does your programme address them?

Henriette Geiger: CBRN threats and risks are addressed through the EU’s global CBRN Centres of Excellence Initiative (“EU CBRN CoE”). It currently involves 62 partner countries in eight regions in the South and East of Europe, the Middle East and the Gulf, Central and South East Asia and Africa. It promotes security governance related to CBRN risks and covers not only intentional acts but also natural and accidental risks. What is unique with the Centres of Excellence is that partner countries are directly involved in the process, guided by the strong engagement of the EU and UN (UNICRI). Under their guidance, national and regional meetings contribute to confidence-building through professional networking. This programme is also driven by a strong South-South collaboratio.

The European: Indeed, it sounds like a convincing and promising concept. What about coordination within Member States and about funding and industry cooperation?

Henriette Geiger: The CBRN-CoE activities are underpinned by the 2017 European CBRN action plan1 and available expertise inside the EU. Member States and their CBRN experts are implementing the majority of CBRN activities and projects funded under this initiative. This guarantees a direct transfer of EU excellence to partner countries. In each of the eight regional centres, an on-site technical assistance expert is deployed and provides permanent technical and operational guidance to regional and national CBRN teams in all fields. EU industry, academics and first responders are connected to the CBRN-CoE through the network of national focal points and users on security, established by DG HOME under its Horizon 2020 security research programme. Regional CBRN centres and EU delegations play an active role in facilitating contacts between EU industrial stakeholders and CBRN national authorities. For example, a mobile CBRN laboratory has been delivered to the Pasteur Institute in Dakar. Another will be delivered
this year to a country in Central Asia and will be deployed and tested in real conditions during a cross-border field exercise scheduled in Uzbekistan in 2020.

The European: Ms. Geiger, as the CBRN CoE concept is such a success, why are you not expanding this strategy to other fields? Could it not be a fruitful extension of the EU’s Global Strategy for greater resilience within its neighbourhood?

Henriette Geiger: That is a good point. There is no reason why this should not be considered in the future. Such bottom-up, voluntary, regional and trust-building investments, based on close partnerships and South-South cooperation can make a big difference when they are well implemented and conducive to greater medium and long-term engagement between the EU and partner countries. Several options could be considered, if there is political will and appropriate financial resources. One of them could be to extend the geographical scope of the CoE programme to Central and South America and to South Africa; another could be to enlarge the technical scope of the initiative to cybersecurity, climate or critical infrastructure security; or, it might be possible to open new CoE networks without overloading the existing CBRN CoE.

The European: Ms. Geiger, I would like to thank you for this conversation and wish you continued success.

Henriette Geiger
has been Director in the European Commission in the Directorate General for International Cooperation and Development, DEVCO, since 2018. She plays a leading role in implementing the people and peace aspects, including security, of the 2030 Agenda of the United Nations and its Sustainable Development Goals (SDGs) in EU international cooperation and development policy, and coordinates actions to implement the 2017 European Consensus on Development in this area.