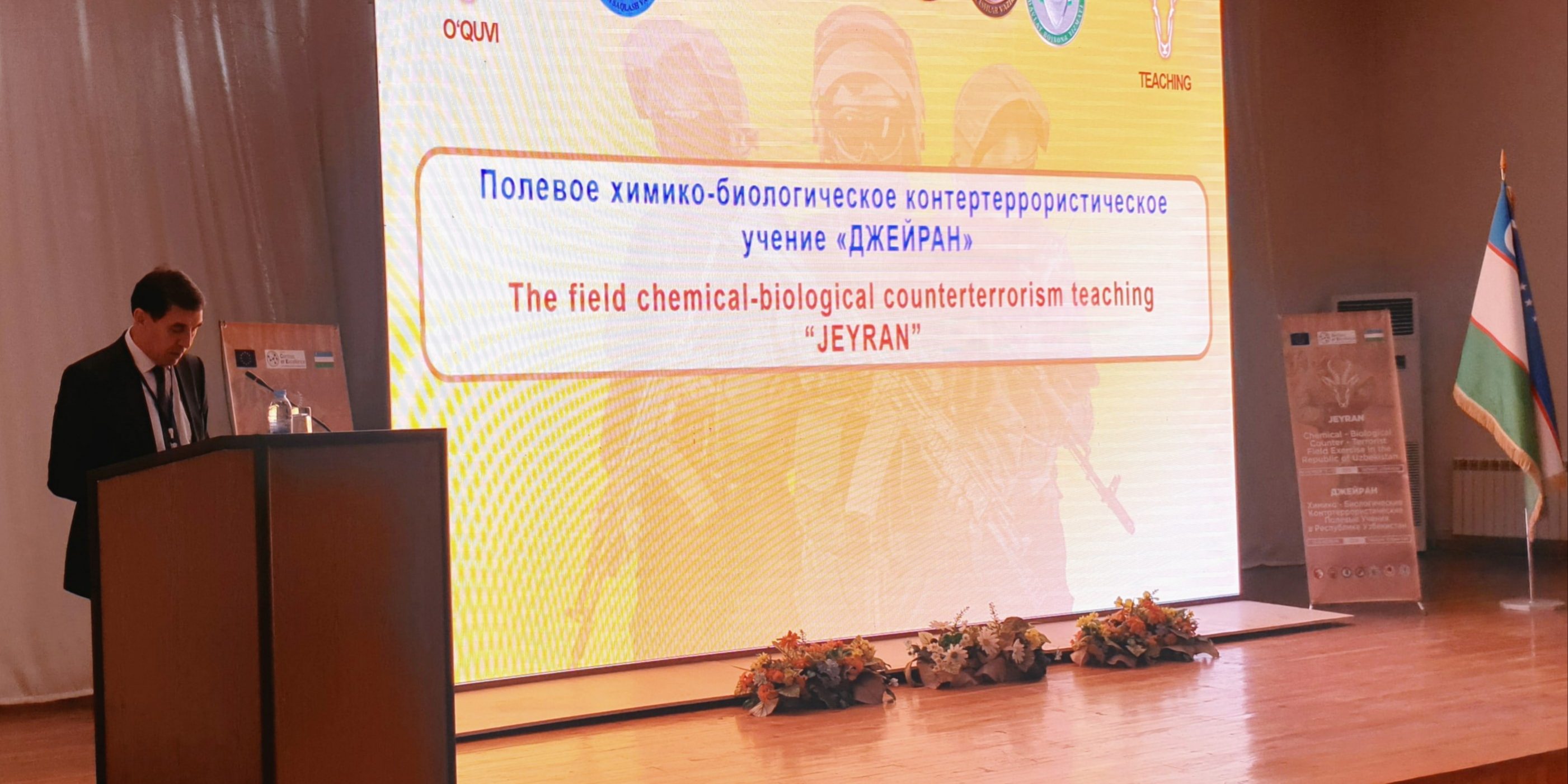 Today, the Counter-Terrorism Field Exercise “Jeyran” was concluded in Tashkent, Uzbekistan. This major three-day event (13-15 November) was organized in the framework of the “European Union Chemical, Biological, Radiological and Nuclear Risk Mitigation Centres of Excellence” (EU CBRN CoE), a EU funded initiative with the aim of fostering national, regional and interregional cooperation around the world to better prevent CBRN incidents or disasters. Approved by the national authorities of the Republic of Uzbekistan, the “Jeyran” CBRN Exercise aimed at fostering preparedness and response capabilities through the simulation of a release ofchemical-biological agents by terrorists.

More than 200 participants from 15 partner countries and Uzbekistan took part in this exercise, including the Heads of the Regional Secretariats of the EU CBRN CoE, the National Focal Points of the partner countries of Central Asia, and representatives of international organisations and diplomatic missions, as well as independent experts and national authorities of Uzbekistan. “Holding the Jeyran field exercise in Uzbekistan is very timely and relevant”, stated the Chargé d’Affaires of the EU Delegation to the Republic of Uzbekistan Mr. Jussi Narvi. He added: “Uzbekistan, which is bordered by five Central Asian countries: Kazakhstan, Kyrgyzstan, Tajikistan, Afghanistan, and Turkmenistan, has always acted as a crossroads for the movement of people, goods and ideas.”

The capacity to prevent, manage and mitigate threats deriving from new types of CBRN material risks depend on professional preparedness, coherence and consistency of actions. These were the focus of the field exercise. “Through this exercise, the interoperability of the national agencies is being strengthened to better prevent and respond to incidents involving chemical and biological agents,” said the United Nations Resident Coordinator, Ms. Helena Fraser, during the opening. She highlighted the role of the EU CBRN CoE Initiative in empowering partner countries and promoting peaceful and inclusive societies for sustainable development, as a crucial objective in the broader framework of the UN Sustainable Development Goals.

During the three days of the field exercise the participants played a variety of roles (active players, observers and evaluators) in different realistic scenarios which cover amongst others: the surveillance of terrorists in possession of chemical and biological agents and their subsequent arrest; detection of illicit storage and a clandestine laboratory; neutralisation of explosive material; and search for improvised chemical devices in a public place.

These simulations, based on real incidents, gave participants the opportunity to improve their knowledge on the decision-making process during the different phases of a terrorism emergency. Finding an effective response among partners and assessing and mitigating the consequences of such a CBRN incident was also a key challenge of the exercise.

“The organization of exercises, such as the “Jeyran” joint exercise, effectively promotes discipline, good time management, and forms the necessary professional skills that will later help to correctly and efficiently respond to various CBRN threats,” noted the Acting Head of the State Committee of Industrial Safety of the Republic of Uzbekistan Mr. Bakhtiyor Gulyamov, who is heading the EU CBRN CoE Regional Secretariat for Central Asia, situated in Tashkent. The representative of the Cabinet of Ministers of the Republic of Uzbekistan Mr. Shavkat Samatov also noted: “The Government of the Republic of Uzbekistan pays special attention to the preparedness of the state response system that represents the objective of the CBRN National Action Plan approved last year. The field exercise has been conducted under this framework.”