The EU CBRN Centres of Excellence – 10 years of cooperation 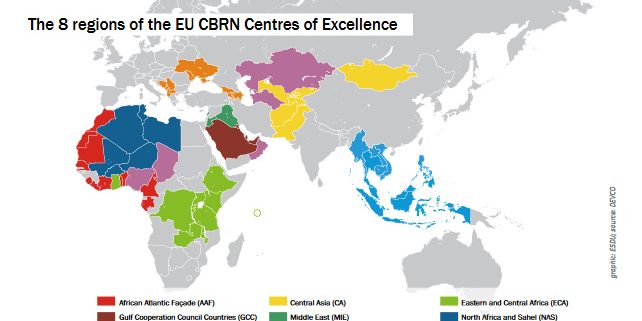 A network of networks to support CBRN risk mitigation, including non-proliferation

Celebrating its 10th anniversary this year, the European external Chemical Biological Radiological and Nuclear Centres of Excellence Initiative (EU CBRN CoE) is considered as a long term global network programme of national CBRN networks and as a platform for regional capacity building on CBRN risk mitigation.

Holistic and interagency approachInitially launched in 2010 under the European external cooperation Instrument for Stability, it involves multilateral partner-ships between the European Union and its 27 Member States with more than 60 countries worldwide, covering the EU Southern and Eastern neighbourhood, the Middle East, the Gulf, Africa, Central Asia and South East Asia. Its main objective is to mitigate chemical, biological or radio-nuclear risks of natural, accidental or intentional origin. It follows a holistic and interagency approach based on partnership and confidence building, with a strong focus on regional cooperation, in close cooperation with the United Nations Interregional Crime and Justice Research Institute (UNICRI). This is one of the largest long-term civilian security external programmes of the European Union. The CBRN CoE network provides to member countries protocols to assess – on a voluntary and strictly confidential basis – CBRN national and regional needs and risks. It promotes the legal adoption of national plans of action and the implementation of regional activities, through its eight regional centres. These may include train the trainer sessions, CBRN curricula, testing, demonstration and cross-border field exercises, always sup-ported by a mix of local and international expertise. Eighty five projects were launched since 2010 under the programme and more than thirty countries have adopted their CBRN national action plans.

Standing the test of the Covid-19 pandemic As early as February 2020, EU headquarters, regional CBRN centres, national focal points from partner countries and on-going project implementing experts started intense collective exchanges to identify means of contributing to the mitigation of the crisis. Using regional working languages (English, French, Russian and Arabic), this unprecedented mobilisation, support-ed by constant regional and global webinars, led to a series1 of mitigating actions, which took several formats. As a result, for example, interregional programmes like Medipiet, Medilabsecure or Stronglab reoriented their activities by developing specific online trainings or shipping urgent supplies to partners. In nearly all regional CBRN centres such as Tbilisi, Rabat, Nairobi, Abu Dhabi, Tashkent and Manila, day and night support was provided by the CBRN CoE regional technical on-site assistance experts (OSA). In Abu Dhabi, the OSA GCC expert was recruited in the Supreme Council for National Security. In other countries, national authorities used pre-deployed trained staff and equipment to support Covid-19 diagnostics. This happened in Amman International Airport in Jordan or in the Almaty Central reference Laboratory in Kazakhstan. Based on regional dialogue and national assessments, additional Covid-19 funding was then allocated by the European Commission:

The way ahead is pavedBeyond these examples, while not being a crisis management mechanism, but rather a network of networks and platform 11triggering regional and inner-country cooperation, the CBRN CoE network is expected to further develop its liaising and capacity building activities in the near future. Let’s assume that this extends its contribution towards a safer and more secure CBRN architecture at local, regional and global levels, in a spirit of win-win partnership and multilateralism, and for the benefit of EU Member States and CBRN CoE partner countries.