Shaping the role of the EU in armament cooperation and export 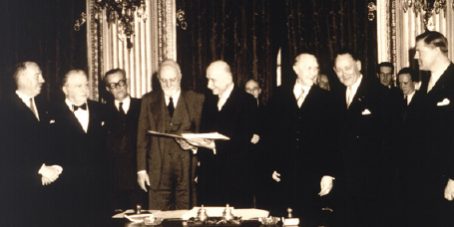 In 1951, the coal and steel industries were still the lifeblood of the war. The idea of entrusting the administration of this strategic sector of the European nations’ economy to a supranational entity did not seem at all realistic at the time. When Robert Schuman and Jean Monnet proposed the creation of the ECSC (the European Coal and Steel Community), only six years had passed since the end of the second world war. Europe was still licking its wounds.

The ECSC project was kept hidden until the last minute by its promoters. Schuman and Monnet were not so much afraid of public opinion, but rather that of their colleagues in government. They wanted to avoid the latter considering their ambition as a fantasy and rejecting it.

This is how the history of the European integration process began: with a surprising and at first sightly unrealistic act.

Relatively speaking, Jean-Claude Juncker did not do otherwise in 2016 when he launched the European Defence Fund (EDF). Prior to that date, the idea that the European Commission would ever interfere in Research and Development (R&D) programmes of complex weapon systems was considered unthinkable by many. Indeed, the military industry has always been at the heart of national sovereignty and, as such, it had until then escaped the European integration process.

When Juncker proposed to launch the EDF, suggesting that it would be funded from the European Union (EU) ordinary budget and administered through the community method, he was bound to create a surprise. Member States were the first to be surprised. However, they did not hinder the Commission’s ambitions. The international context at the time did not lend itself to this. It was September 2016, the British had just voted for Brexit, the Americans were about to elect Donald Trump as their new president and, two years earlier, Russia had invaded part of Ukraine. European leaders had good reason to be concerned.

In such a troubled context, defence integration suddenly appeared more relevant than ever. Thus, between the second half of 2016 and the end of 2018, a window of opportunity opened and Juncker took advantage of it. By announcing the creation of the EDF in September 2016 and formulating a first concrete proposal on 30th November, just a few weeks after Trump’s election, the President of the Commission was able to ride the wave. Juncker went fast: he asked his services to work hard to adopt concrete legislative proposals in record time to exploit the temporary alignment of the stars. As long as the current political situation was favourable, he had to place the Member States before a fait accompli, which he managed to do. This is how the EDF came to life.

Today, the EDF is considered one of the most relevant and promising initiatives in European defence. Its path is strikingly similar to that of the ECSC: with a bit of audacity and surprise, what was perceived as unrealistic has suddenly become indispensable.

Once the EDF was adopted, another challenge arose for the EU. The EDF inevitably stimulated the debate on arms transfer controls, raising a simple question in this regard: if the EU budget is to finance the development of military equipment, should the time not come to increase the EU’s competences in the field of arms exports? The EDF is not the only European instrument that has made this question relevant. Other initiatives, such as the Permanent Structured Cooperation (PESCO, 2017) or the European Peace Facility (EPF, 2021), could be cited as examples of the EU’s growing role in the armaments sector.

Control of arms export: In the context of a military-industrial scene that is set to become more europeanised, the idea that the Union should strengthen its capacity to control arms exports has become obvious, even to the Member States. It should not be forgotten that an increasing number of defence systems produced in Europe now incorporate components from several EU countries. Bilateral, mini-lateral or EU-led cooperation has become common practice. However, these arms development programmes are often blocked by disagreements between states on exports.

Binding regulations: The question is therefore not whether Brussels should increase its role in this sector, but how to do it. At present, the EU has limited competences. In 2008, it adopted a Common Position which sets out eight criteria to be taken into account by Member States in their export policies. However, these criteria are often not respected and there is no system of sanctions in case of non-compliance. The EU must therefore improve its arms exports control system. To do so, it has two options: it can either hold on to the intergovernmental route, or it can take the community route by adopting a binding regulation that would incorporate the criteria of the Common Position.

Communitarisation: Instinctively, Member States tend to be reluctant to use the community method, especially when it comes to defence issues. However, once they recognise that the EU needs to strengthen its competences on arms control, the option of communitarisation could prove to be more attractive to them than it might first appear. There are two reasons for this. Firstly, because Europeans often tend to compete fiercely against each other in the arms trade. Therefore, strengthening the EU’s intergovernmental action in this field could be much more problematic than opting for the community route. In the latter, indeed, supranational and impartial EU institutions would come into the equation in order to ensure greater clarity and objectivity in the interpretation of the common rules. Secondly, it should not be forgotten that the community system is not federal and leaves the states with decisive room for maneuver. A misunderstanding must be cleared up in this regard. Communitarising arms transfer controls does not mean giving an EU entity the power to grant export licences instead of national governments. As in the case of dual-use goods, European capitals would retain the power to decide when to export and when not to. But this time, unlike the current arrangement, the Commission and the EU Court of Justice would be able to ensure that specifically prohibited situations are respected. They would only intervene in these limited circumstances.

In the light of these considerations, the community path does not seem so unreasonable. Yet, at this stage, it remains taboo. It is considered unrealistic or premature, as were the ECSC and the EDF before they were created and appreciated.