An integrated approach for sustainable security 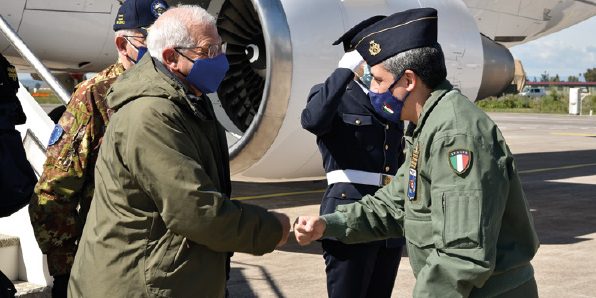 The security situation faced by Europeans today can be increasingly characterised by evolving threats, complexity and uncertainty. On a global scale, contested norms, strategic competition, climate change, terrorist, cyber and hybrid threats can potentially increase instability and volatility in already fragile social and political situations. It is apparent to Member States that failing to ensure security and stability beyond EU borders will affect its society, security and economy. There is an expectation that the EU and Member States must be able to protect its citizens as well as uphold European values. However, given the scale and complexity of global security threats, no Member State can tackle them alone. For this reason, the EU is addressing its current and future security and defence needs by enhancing its strategic autonomy and its capability to act as a credible global security provider.

The requirement that the EU ‘have the capacity for autonomous action, backed up by credible military forces’ gives the EU the possibility to intervene outside its territory through civilian and military crisis management missions and operations. Through a unique blend of soft and hard power, using security and defence instruments alongside diplomacy, sanctions, development, cooperation and trade, the EU applies an integrated approach to sustainable security. This enables the EU to take a leading role in peacekeeping, conflict prevention and strengthening international security.

The role of the EU Military Staff

A key enabler of EU hard power is the EU Military Staff (EUMS), established 20 years ago to provide ‘military expertise and support to the Common Security and Defence Policy (CSDP), including the conduct of EU-led military crisis management operations’. The EUMS had a role primarily focused on supporting the planning and launch of operations outlined in the Helsinki declaration. The Political and Security Committee (PSC), responsible for the shaping of the EU’s Common Foreign and Security Policy (CFSP) and CSDP, and the EU Military Committee who provide, inter alia, military advice and recommendations to the PSC, were also created at that time.

Another key development was the establishment of the European External Action Service (EEAS), the EU’s diplomatic service, in 2011. It helps the EU’s foreign affairs chief – the High Representative of the Union for Foreign Affairs and Security Policy – carry out the Union’s CFSP. The EU currently deploys over 5,000 personnel in 17 CSDP missions and operations across three continents. These missions and operations contribute to the stabilisation efforts in neighbouring regions and promote a more stable and secure international environment. As an integral component of the EU’s Integrated Approach to conflict and crisis, and acting under the direction of the EUMC, the EUMS continuously monitors all military aspects of the EU’s CSDP military operations, namely Operation ALTHEA in Bosnia and Herzegovina, IRINI in the Mediterranean and ATALANTA in the Indian Ocean. These operations have an executive mandate and as such are authorised to conduct governmental or executive tasks in support of a government, or in the absence of a governmental authority.

The EUMS also supports the Military Planning and Conduct Capability (MPCC) for the EU’s CSDP non-executive military training missions, presently in Central African Republic, Somalia and Mali. These missions concentrate on capacity building, mentoring, monitoring and training; they have no specific power to undertake activities that are the legal and rightful responsibility of the government and its ministries.

This are a total of six military missions and operations and over 2,700 military personnel deployed.

The CSDP continues to develop

The EU continues to ensure that it has the right capabilities, structures, financial instruments and cooperative frameworks to deliver on its CSDP. These include the Permanent Structured Cooperation (PESCO), the European Defence Fund (EDF), the Coordinated Annual Review on Defence (CARD), and a new set of EU Capability Development Priorities. A new off-budget instrument, the European Peace Facility (EPF) will also enhance the capacity of the EU to react faster and more efficiently to a conflict or crisis and facilitate capacity building.

Regarding the CSDP missions and operations, the establishment of the MPCC, with the capability to plan and conduct simultaneously one executive operation and up to five non-executive military missions, has enhanced and improved the crisis management structures of the EU.

Finally, the Strategic Compass – to be delivered in early 2022 – will help strengthen a common European security and defence culture, show greater operational clarity, enhance EU resilience, develop high-tech capabilities and work closer with partners. All of which will help define the right objectives and concrete goals of the EU’s CSDP.

These structures and capabilities are designed to streamline and improve the EU’s Crisis Management ability. Supplementing these developments, the EU conducts simulations to exercise and evaluate its response procedures and mechanisms, such as the EEAS Crisis Response Mechanism and the Joint EU Consular Crisis Preparedness Framework, to address a crisis with an external dimension. Most recently, the EU successfully completed Exercise Integrated Resolve, a training exercise designed to assess the EU’s ability to coordinate and respond to external conflicts and crises. This exercise focused on the CSDP planning processes and operational conduct in a hybrid threat environment. The exercise had a simulated executive mandate and was conducted in coordination with an EU delegation. The scope of Integrated Resolve was an external dimension crisis not just focused on the CSDP planning of the mission and operation, but in the management of a crisis affecting EU assets abroad, such as the military operation and civilian mission deployed together with the EU delegation in the affected country. Even more remarkable and a measure of the EU’s CSDP commitment and resolve was the safe conduct of the exercise amid a pandemic.

There is little doubt that Member States remain in the driving seat when deploying security and armed forces to CSDP missions and operations, or that they must work closer with one another if they are to successfully address the security and defence challenges of the future. The EU can facilitate and reinforce this cooperation, and, through the evolution of its CSDP structures and the development of its people, make the collective effort greater than the sum of its parts.