The displaced – a continuous failing of the global community 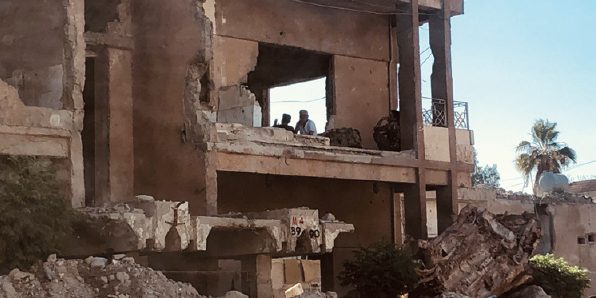 I have been working to the best of my abilities with and for the displaced children, women and men of this world for more than a decade now. From Germany to Turkey and Syria to Iraq, the Mediterranean Sea and back to Syria. There is one ultimate truth in the suffering of people which the “coat” of humanitarian aid cannot cover up: committed and collective political willingness is missing to end the suffering of human beings, to save people’s lives, to ensure dignity, humanity, and freedom to each and every one of us, to establish peace and stability and to get societies back on their feet after a man-made or natural catastrophe. Political willingness – nothing more, nothing less.

No equal access to a peaceful and dignified life

The jurisdiction to uphold human rights, to mitigate and end conflicts and wars, to support the most vulnerable, to offer refuge and grant asylum, to ensure all human beings – regardless of their origin, gender/sex, age or faith – have equal access to a peaceful, dignified, safe and sustainable life has existed since even before the horrors of the two world wars, but even more so in their aftermath.

Nevertheless, to name a few examples: to date, 79.5 million people have been forced to flee their homes, a trend which is rising; millions of them live in camps like settlements or other forms of inhuman shelter conditions around the world, including in Europe; by May 2021 the limited data we have revealed that 1,346 people have lost their lives at sea across the world, 743 of them have drowned in the Mediterranean Sea under the watch of the EU and its member states; 690 million people still go hungry every day.

Between hope and deception

I started my “career” as a humanitarian aid worker in the context of the Syrian war in 2014. As “expats” unable to access large parts of the country due to the unfolding war and extreme violence, we could only operate across the Turkish border under the UN Security Council Resolution 2165, witnessing the neighbouring country on the other side of the fence (by now a fully fledged, patrolled and armed concrete wall) falling apart and civilians fleeing for their lives. Seven years later, the context has changed. Frontlines and areas of control in Syria have shifted hundreds of times and to date, we witness a stalemate, a fragile status quo. However, after ten years of war and an additional financial crisis in Lebanon, the Syrian economy is shattered and in freefall. People cannot make ends meet anymore, slipping one by one under the poverty line with all the horrid consequences, such as child labour, child marriage, high school dropout rates, families skipping meals, a rise in gender-based violence and mental health issues, and ultimately a rise in criminality driven by despair.

If decision makers do not care about humanity and human rights, let me just remind everyone that this is a perfect breeding ground for the rise of radicalism, extremism and terrorism – the trigger for “the west” to step up and act. But why only act when “the west” feels threatened, when the damage is already done for the affected communities? When it takes so much for time to rebuild and recover?

Iraq and Syria have made it clear where the focus of the so-called international community lies. When the “defeat” of the common enemy ISIL was declared in both countries, the focus of the powerful media and politicians immediately shifted away and so did the funding priorities of institutional humanitarian donors. Right in the moment where a window of opportunity opened up to work on more durable solutions for displaced populations, returnees and host communities, both UN agencies and NGOs had to cut budgets, close down projects, take national colleagues off their payrolls and people in need off their beneficiary lists.

In Iraq at least, development actors stepped up for more mid- and long-term solutions, but in Syria, due to the political context there is no World Bank to work on ways to rebuild the crippled economy, no UNDP and alike with funding to rebuild people’s homes or at least public services, like hospitals, schools, water stations. That becomes ever clearer when one compares Mosul, Iraq and Raqqa, Syria, both heavily bombed by the Coalition Forces in the fight against ISIL. While in Mosul international money is supporting the reconstruction, in Raqqa people are largely left alone to rebuild with the means they and their relatives abroad have. A political decision.

A continuous failing of the global community

The looming global climate change already hit the region years ago. This year the FAO declared a drought in Syria while the water crisis including along the Euphrates River starts showing additional destructive effects on the drinking water, agriculture, food security, electricity, public health and livelihoods of millions of people. I will not even start with the Covid-19 pandemic. As one Syrian displaced family told me recently “Habibti (My dear), we have suffered through so much and we know there is yet more to come. We cannot afford to think about and frankly we do not care about Covid-19.”

Governments and their humanitarian departments turn to us humanitarians on the ground to receive briefings on needs, gaps and context updates and with their limited financial envelopes they try to do their best to finance what is most needed and raise concerns to their politicians. But it is neither the job nor the mandate of humanitarian action to “fix” a country. Frankly, it is not in our capacity either. However, we are here, on the ground, with our national colleagues and I can see every day that the world is collectively failing to really support the affected population – talk to my colleagues in other contexts around the world, they witness the same. Restoring humanity, dignity, hope and peace – a future – requires the collective, committed and long-term efforts of every stakeholder involved. The decisions to do so are made at the capital level: Brussels, Washington, Moscow, Beijing – to name only a few.

It was hard to realise in my work that it is indeed a political decision to ensure that no child has to work for US$1 a day at a dumpsite, no mother has to lose her children in aerial bombardment, no family has to “live” in a tent in the bone-chilling cold or scorching heat, no human being has to drown at sea on the journey to safety, no one has to starve to death. This list is much longer, but everyone is very well aware of it.

So why is there no political willingness to truly and sustainably dismantle this list across the globe so that one day humanity and human rights are not empty shells anymore?

You might not believe it, but I am fond of my work and I will continue to support people who were forced into inhumane conditions. The disappointment of political decision-making is constantly on my mind, but I also have the hope that one day humanity will prevail. It is a decision.

How to successfully prosecute CBRN crimes – from the crime scene to the courtroom
26. August 2022