The castaways of hell 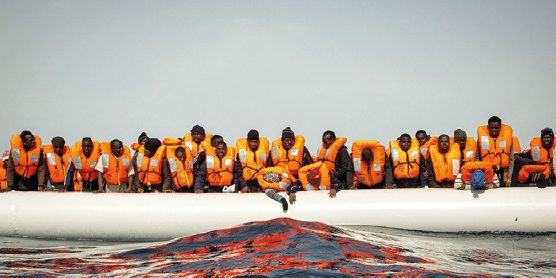 has been the president of SOS MEDITERRANEE France since June 2019. He holds a master’s degree in international transport and is a certified captain and chief engineer in the French Merchant Navy. Acting as marine consultant, he has spent over 40 years in the maritime sector, holding various positions of responsibility at sea and ashore.

On 1st May 2015, the cover page of The Economist displayed a photo of an overcrowded rubber boat with the comment: “Europe’s boat people – A moral and political disgrace”.

Where do we stand today? Since 2014 and the end of operation Mare Nostrum led by the Italian navy, more than 20,000 people have lost their lives in the Mediterranean Sea.1

In the face of such a tragedy in this sea, where European history has been built over millennia, we could expect a strong reaction from European countries. Various operations have been implemented: Triton, EUNAVFOR MED Sophia then IRINI from March 2020. Unfortunately, the mission is not to save peoples’ lives as a priority, as it should be according to the Law of the Sea; but rather to protect European borders and fight against illegal trafficking.

SOS MEDITERRANEE was created in March 2015 by European citizens as a response to the tragic situation in the Central Mediterranean Sea and of the failure of European states to take proper measures. They ignored their duty to render assistance to all persons found at sea in danger of being lost, which is a legal obligation for states or any ship close to the distress zone. At the same time, while EU Member States have step by step removed their naval assets from the Central Mediterranean, which is the deadliest migration route worldwide, they have strengthened Frontex and financed Libyan coast guards. Besides this, criminalisation of NGO vessels is becoming a trend for several European states.

The sad truth on the Libya deal

Libyan authorities are intercepting and sending back to Libya thousands of people who are then jailed in detention centres where they face severe abuse and human rights violations: torture, rape, extortion, ransom, and all kind of acts of violence. To be freed, they must pay human traffickers time and time again, who let them embark on flimsy boats until they are intercepted again at sea and returned to the hell they just escaped from. By subsidising Libyan coast guards to intercept migrants’ boats, the European Union is thus participating in this tragic vicious circle. Instead of fighting efficiently against human smuggling, this policy contributes to fuel it.

This is the sad reality in Libya. This country cannot be considered as a port of safety for migrants and refugees, nor can it effectively manage migration challenges on and off its shores. European states are aware of the situation which has been properly documented and witnessed for years already. After CNN released a report on Libya’s slave market released in November 2017, French President Emmanuel Macron denounced the “crimes against humanity” committed against migrants in that country.

The situation in the Central Mediterranean

As summer is starting, SOS MEDITERRANEE ascertains that there is currently an alarming absence of effective coordination in the Libyan Search and Rescue (SAR) zone, and a concerning lack of assets to answer to humanitarian needs in the Central Mediterranean. Libyan authorities have officially been given the responsibility to coordinate SAR activities off Libyan shores since June 2018. However, Libya is currently a failed state that is under an international conflict resolution process after years of civil war. As a matter of fact, Libyan authorities are not able to effectively coordinate the Search and Rescue Region (SRR) off their coasts in the spirit of maritime and international law.

On 21st -22nd April, the Libyan Joint Rescue Coordination Center (JRCC) failed to coordinate a rescue operation, and neither Malta nor Rome took over. A Frontex airplane only arrived and took action 10 hours after the first alert, in the evening of Wednesday 21st. As shown in the timeline of events properly recorded onboard, in the more than 24 hours that elapsed between the first alert and the tragedy, our rescue vessel Ocean Viking received no proper answer to her request for intervention from the maritime authorities to coordinate operations. Unfortunately, this circumstance is not an exception – instead, it became the new rule since June 2018. This failure was fatal. With proper coordination and timely action, 130 lives could more than likely have been saved.

SOS MEDITERRANEE has observed an increased number of departures since the beginning of 2021, despite the low, if any, rescue capacities offshore.

Indeed, during winter, reported figures2 (see table) are alarming. In 2021, reported deaths have increased by 295% compared to 2020, and almost 100% compared to 2019. Also, reported attempted crossings in 2021 have doubled from 2020. At the sight of these figures and in the current context, as the 22nd April shipwreck sadly demonstrated, there are not enough SAR capacities in the Central Mediterranean. This situation makes us fear the worst for the coming weeks as summer, and better sailing conditions, are coming.

The EU needs to step up and act jointly

In the face of these severe failures and this tragedy taking place at our borders, European countries have a responsibility to step up and act jointly:

To put human lives first and prioritise rescue before any political consideration.

Italy and Malta, as part of a European agreement including material support and a resettlement system, should be a relay to Libya. Moreover, with the European resources already available in the Central Mediterranean, support for this coordination can be quickly put in place. For example, Frontex operations could be readjusted, and resources allocated to support maritime rescue coordination through transparent involvement in the process.

In a longer-term process, this responsibility could be taken over by the European Union, among other things through the shaping of a European MRCC.

EU Member States should immediately reallocate current resources in the Central Mediterranean, as per the IRINI operation, for SAR operations. Summer is coming. Shipwrecks will happen again. EU Member States are responsible for addressing the needs of search and rescue operations.

To reach this point, the European Commission should enshrine SAR questions in the European New Pact on Migration and Asylum, involving SAR NGOs in open spaces such as the working groups in which we are willing to take part and share our expertise.

Finally, European states must take decisions where humanity and common sense are at the centre of the measures taken. Solidarity with frontline countries in Europe must be the common language of all Member States. It should be the DNA of European values. I believe in and stick to what our European Parliamentarians have proclaimed: “The European Union’s fundamental values are respect for human dignity and human rights, freedom, democracy, equality and the rule of law.”