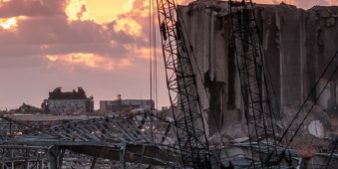 The search for closer relations between the European Union and the countries of the Mediterranean basin has taken the form of a Mediterranean partnership agreement (Gomez, 2018) which provides for cooperation in various fields and establishes an open global level of interaction, which includes integration. This agreement was signed with each country separately, including Lebanon, in 2002.

The Mediterranean area is today a major part of the world where geopolitical instability is present. According to several notions and in the context of public policy narratives, the European Neighborhood Policy (ENP), through which Europe seeks its strategic presence, constitutes a policy necessary nowadays to ensure and achieve the maximum geopolitical stability in this region.

Lebanon and the EU security approach

With the increasing political and security tensions and problems in the Middle East, the need for a complete structured EU security and defence architecture is highly necessary to face the threats on all levels. The ENP1 towards some countries in the Middle East, such as Lebanon, tends to strengthen prosperity, human rights and security by applying (theoretically) EU principles and views to establish a common and shared base between the EU and the country. The door for third state parti­cipation in tailoring the EU security architecture is open, yet the extent of participation remains to be determined.2

In early August 2020, Lebanon became the centre of attention for many international actors such as the EU, the United Arab Emirates (UAE) and the Kingdom of Saudi Arabia (KSA) after the 4th August explosion in Beirut. This call for attention was given by French President Macron, with a final objective of creating a Lebanese government to ensure some political stability at the local level. This initiative creates an important French role on the Lebanese territory and presents a solution for the ongoing Lebanese political crisis. However, there is no EU support. The strategic approach of the Common Foreign and Security Policy (CFSP) mentions the need to deal with third states and partner countries to ensure maximum outcomes of the Common Security and Defence Policy (CSDP). The first pillar of the CSDP is building the capacities and capabilities of partners. This is extremely important to achieve synchronisation between the EU and the selected country on geopolitical, social and economic levels. Another pillar of the CSDP is the act of responding to external conflicts and problems with strategic approaches, adapted to each threat. The final pillar is to protect the EU and its citizens, thus, linking external conflicts and problems with the first two pillars to achieve maximum protection of EU citizens.

The EU Institute for Security Studies, in collaboration with the French Permanent Representation to the EU, shared a report at the end of a high-level conference that was held on 12th March 2021. The report focused on the ways in which the EU can strengthen its capabilities in sea, air, space, and cyber. By connecting all these domains, the EU will enhance its ability to protect its own territory and can ultimately project security towards EU partners. This Strategic Compass will ultimately lead the EU to become a stronger global partner. The EU security and defence vision as it is shown in the Middle East is after all a micro-level approach and the successful application of this orientation has to imply all EU countries.

Lebanon – a perfect case for the EU

Let us focus on the Lebanese case, aiming to link the ENP and the 2016 EU Global Strategy (EUGS) to show the importance of third states such as Lebanon on the EU security level. The EUGS promotes the idea of protecting the interests of European citizens by applying concepts such as peace and security, prosperity and partnership towards partners where the EU will be a responsible global stakeholder investing in EU partnerships as it laid down in the text of the European External Action Service (EEAS/2016). Working with partners on a regional approach to address common challenges is a key point in the EUGS.

The ENP towards Lebanon, which entered into force in April 2006 as the EU-Lebanon Association Agreement,3 promoted Lebanon as a stable, democratic, and politically open country with a strong economy. The revised ENP with the Southern Neighborhood published on 9th February 20214 mentioned that the EU should help and support Lebanon’s efforts to resolve ongoing domestic, economic, political, and social crises and thereby lacking the security approach gaps filled within the EUGS. The EU, through the Strategic Compass, compiled some of the EU capabilities to achieve maybe the most needed objectives today, ensuring the security of EU borders internally and externally as a common nexus. At the due date of 2022, as well as during its process, the Strategic Compass will allow external threats to be neutralised in order to establish internal security.

The door to Europe

The Strategic Compass is a way of putting together all capabilities in one common EU toolbox, mainly depending on defence, whereas foreign affairs create a pragmatic vision of what Europe is facing today. Lebanon is the door to Europe and it is in the EU’s interest that terrorists do not infiltrate through it. The preservation of a safe Lebanese border is a critical issue in the fight against terrorist groups, as said James Cleverly, the UK minister of Middle Eastern Affairs.5 Lebanon, close to the EU, can ensure optimum results of such a security focused EUGS.

The EU must improve its cooperation mechanism with third states like Lebanon to cover large parts of the security gaps.

The positions and ideas in this article express the viewpoint and opinion of the author and do not obligate any other party.