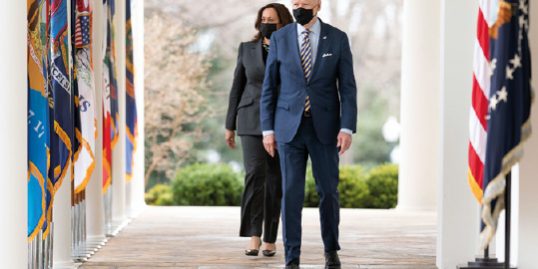 The European: Mr Sing, during the last year we saw pictures of America, which shocked all those who believed in the democratic values the United States has always defended. We saw the murder of a black citizen, George Floyd, by a white police officer in Minnesota in July 2020. We couldn’t believe what was reported from Washington in January 2021: the attack on the US Congress, the cradle of democracy, encouraged by a former US president, who wanted to return to power after having lost democratic elections. America’s society seems to be in turmoil. Can one speak of a divided nation?

Michael Singh: There can be little doubt that we are enduring an era of significant political polarisation. While there are gaps within each party – based on age, education level, etc. – it is the partisan gap between Republicans and Democrats that is most pronounced. What’s more, this polarisation is deepest with regard to some of our most difficult issues – for example, racism, gun policy, and climate change – and increasingly seems to affect Americans’ views not just of politics and political leaders, but of one another. Combined with what seems to be an increasingly tribalised media and a declining regard for institutions – whether religious, social, or governmental – this polarisation has made compromise and problem-solving difficult.

The European: Yet we should not forget that there are still things on which Americans agree!

Michael Singh: You are right. For example, large majorities want the United States to maintain its leadership role in the world and lead through diplomacy and alliances. Sustaining our leading role on the world stage requires us to maintain our vigor and prosperity as a country, which in turn demands that we find ways to overcome our polarisation.

The European: The new president has been very busy in his first 100 days. He has been active in international policy, reversing most of his predecessor’s decisions concerning relations with Europe and NATO, the Paris Climate Change Agreement, and the World Health Organisation. He also defined the directionof his foreign policy and the future US relations with China and Russia. But how will he deal with the domestic crisis, which at the same time is a public health, economic, and, most importantly, a social crisis?

Michael Singh: It is irrefutably the case that the Biden administration’s top priorities are domestic – the United States, like much of the world, has been plunged into a public health and economic crisis for more than a year, though thankfully we seem to be through the worst of it thanks to the combined efforts of the current and previous administrations and of the American society as a whole. But difficult challenges remain: getting Americans back to work, for example, and tackling deeply divisive challenges related to racism, immigration, and other issues.

The European: But isn’t there a cleavage between domestic and international policy?

Michael Singh: I think that it is a mistake to think that we cannot tackle domestic and overseas challenges at the same time – we can, and we must. Indeed, the two can reinforce one another – foreign policy may be an area where Republicans and Democrats can begin to find common ground, and conversely, the more successful and prosperous we are at home, the stronger we will be on the world stage. But we must begin with a conscious decision to seek and find common ground with our domestic political opponents, and to work jointly toward our mutual success – bipartisanship is a choice.

The European: There is a certain optimism in your answer, but do you believe that President Biden will be able to achieve reconciliation between the rural and traditional America and the urban population living in cities which are often more open to progress and societal change as we see it in Europe?

Michael Singh: In my view, discussion of a “rural-urban divide” in the United States is often more caricature than reality. While there are real differences between rural and urban areas in the United States, they are not as stark as our friends overseas ima­gine. One of the first pieces of advice I give to diplomats from Europe and elsewhere posted to Washington is to go around the United States and develop a real understanding of the country and its people, in all their diversity. As someone who is from the Midwestern United States but has lived his entire life in and around cities, I think it is important to recognise that rural areas are not monolithic, but are more diverse and vibrant – and frankly essential to the American economy – than is often recognised. I think that rather than focusing on fixing a supposed rural-urban divide, we need to instead seek to help both rural and urban areas address their local problems and promote worker mobility so that individuals can more easily move between different locations.

The European: Let’s continue on the subject of the economy: the new president found a worrying situation with the pandemic stirring up numerous sectors. Does Biden see himself as a new Roosevelt, who led the US out of the 1930s economic crisis? Could the huge investment programme he launched this spring help to bring people together and give America new breath?

Michael Singh: The Covid-19-induced economic recession in the United States was indeed the sharpest since the Great Depression, but will be much shorter, thanks to the pande­mic’s decline and aggressive fiscal and monetary policies by Congress, the current and previous administrations, and the Federal Reserve. Significant questions remain – how long, for example, it will take the US GDP and unemployment to return to their pre-pandemic trajectories, and whether, as well as which groups of workers will suffer long-term disadvantages. But as things stand today, the US economy appears set to rebound in 2021.

The European: But in the longer run, significant internal questions face US economic policymakers…

Michael Singh: Indeed. To name just a few challenges, US policy has to reflect how and whether to expand the social safety net, how to cope with the effects of climate change, and to what extent federal debt, poised to reach its highest level ever in proportion to GDP, is a problem demanding action. And we must grapple with these questions in an environment in which Americans of both parties are increasingly skeptical of trade and other forms of international economic integration. These are issues that will demand leadership from the White House. And, most importantly, they will require a revival of Congress’ ability to forge bipartisan compromise for the common good.

The European: Politically the domestic situation isn’t easy for Biden. The  Democrats have a razor-thing control of the Senate and apparently, Trump’s voters continue to believe in the former president. This Right – protectionist, isolationist, profoundly mistrustful and open to conspiracy theory – is completely hostile to Biden. What are the consequences for the President’s agenda?

Michael Singh: As I already noted, American society is more polarised today, and those on the ideological fringes more confident and influential than at any point in recent memory. Yet at the same time, and perhaps a bit paradoxically, polls suggest that Americans dislike this polarisation and would like to see their leaders work to overcome it. I think this is especially the case after what has been an enormously difficult couple of years for Americans and for much of the world. But amid this polarisation, it can be easy to forget that there is plenty that unites Americans.

The European: Could you please develop this point?

Michael Singh: We share both concerns – for example, over the rising challenge from China, or deepening economic inequality – as well as aspirations – to remain the strongest and most economically vibrant country in the world, and to devise a foreign policy that prioritises peace and diplomacy over conflict. These common concerns and aspirations present an opportunity both for President Biden, who campaigned as a centrist able to work across party lines, and Republicans, who need to outline a positive agenda to broaden their appeal going forward.

The European: So, can we conclude that Joe Biden and his Vice-President Kamala Harris form a future-oriented presiden­tial team capable to overcome the last four last years and energetically tackle the huge challenges in the country, with a diplomacy directed to the US middle class?

Michael Singh: In my view, middle-class Americans want a foreign policy that delivers prosperity and security, plain and simple. And polls suggest that they have a good grasp ofwhat is needed to accomplish that – according to the Chicago Council on Global Affairs, for example, two-thirds of Americans want to see the US maintain a leading role in world affairs, nine in 10 favour maintaining existing alliances. And according to Gallup, Americans’ views of trade actually grew more positive over the past several years. It is up to the United States’ political leadership – the Biden administration, Democrats and Republicans in Congress, and leadership at the state and local levels – to work together to deliver on these things and to create the conditions that allow the creativity and self-confidence that have always defined the United States to be fully realised. I continue to believe that for all of our troubles and divisions, we remain eminently capable of coming together to accomplish great things.

The European: Mr Singh, I thank you for this conversation. Our readers will be grateful to follow your ideas and insightful views.