Europe in a post-Merkel world… 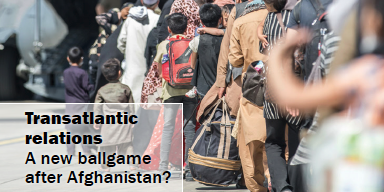 In Brussels, the old Greek saying that progress is only stimulated by crises carries weight. The fact that Angela Merkel, the German Chancellor, is taking her leave of the circle of EU leaders after 16 years has been taken with equanimity in Brussels, in the knowledge that her departure will not provoke an internal crisis in the Union.

German voters rejected radicals and have given the three leading European-minded parties in the Bundestag the opportunity to form a solid coalition. Merkel’s successor will represent a stable, Europe-oriented Germany in the Union and, like Merkel, he will focus on maintaining stability and represent a forward-looking Germany. He will urge the further development of the EU, focusing on sound finances, progress on the Green Deal, a solution to the refugee crisis and a balanced neighbourhood policy. However, there is not likely to be much enthusiasm for orienting the Union’s strategic compass towards military capabilities.

Crises can quickly loom within the Union. The “culture wars”, triggered first by Hungary and now Poland over the EU’s values ​could lead to an identity crisis, but it could also encourage all other Member States to close ranks, as they did over Brexit, and therefore consolidate the Union’s internal cohesion.

On European foreign policy, French President Macron has repeatedly made visionary proposals for Europe, but these have been received without enthusiasm, especially by Germany, and ended up on a back burner in Brussels.

The French EU Presidency wants to move the Union forward in a big way in the first half of 2022. Brussels, however, has doubts that France will succeed in this venture as Macron will face re-election in May and would need Germany as a strong partner to implement his ideas. It remains to be seen whether Germany’s new coalition will be broad enough politically to support such large designs.

The EU will miss Angela Merkel with her composure and her sense of an ‘honest’ and solid compromise. There will be memories of all night meetings in small or large groups, in which she usually succeeded in harmonising Member States’ various interests. Stabilising and preserving was her policy. In her 16 years as Federal Chancellor, Angela Merkel gained a well-deserved reputation as a convinced European. She has strengthened the Union, even though she was not a visionary laying out ground-breaking and long-term strategies. Her visions were more spontaneous, shaped by humanitarian and ethical convictions. Her reaction to the Syrian refugee crisis in 2015 is a case in point.

Opening the German borders to refugees was not an economic decision, as critics have charged, especially in France accusing the Chancellor of wanting to stabilise the shrinking German labour market. No, it was a profoundly dignified, humanitarian decision in the full glare of German history, in which the Nazi dictatorship destroyed millions of lives with the utmost cruelty. Here was an opportunity for the Germans to prove their humanity and help save millions of lives. The images of an unexpectedly welcoming culture will long be remembered.

Angela Merkel also freed Germany from its self-imposed restraint on foreign policy, encouraged in doing so by the EU Commission. She, whom the armed forces generally considered with professional indifference, nevertheless succeeded in demonstrating Germany’s solidarity with the EU in security and defence policy. However, moving on from training support and logistical provision to combat deployment is a step she has left to her successor.

She is stepping down at a time when the world is changing, alliances are shifting, and the great powers are redefining their priorities. The world is also facing a digital quantum leap that must be mastered as well as other big issues like the reshaping of globalisation after the corona pandemic.

Angela Merkel played a key role in successfully manoeuvering the EU through major crises from which the Union has emerged stronger. The task now is to move the Union forward without her and to adapt it to the new challenges.

The German Chancellor has done her duty with dignity for the future of her country and the European Union.