The essence of the transatlantic security and defence relationship 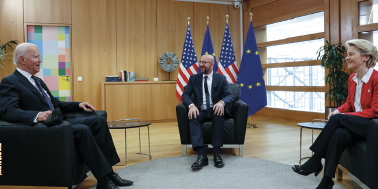 The European: Professor Pöttering, what was your first thought when you heard US President Joe Biden, on the occasion of his visit to NATO headquarters in Brussels some months ago, say that “America is back again”?

Hans-Gert Pöttering: We all were happy to hear this message from President Joe Biden. We really believed NATO would become an alliance again, in which each partner is respected. The most important was: Americans and Europeans share the same values, and there is a new president who says it and believes in it.

The European: While the US is reshaping its leading role in NATO – not without some impact on Europe’s efforts in defence – the European Union is reflecting on how to become a geostrategic player, gearing up to be a valuable partner for the US in Europe and so giving Americans more room for manoeuvre in critical regions of the world. Do you believe that the unwavering solidarity of Europe towards the US is reflected in a similar level of solidarity of the USA towards Europe?

Hans-Gert Pöttering: We Europeans are good in rhetoric, but we lack action. There is not enough political will on our side. Americans are right that Europeans are not doing enough as far as security and defence are concerned. We have to see how far the United States will be engaged in the world in the future. The new alliance between the US, Australia and Great Britain – cancelling Australia’s commitment with France in military supply – is not only a negative signal to France, but the European partners of France as well. This is a great disappointment, but the US will be in solidarity with its European partners in the future though, maybe not as unwavering as they were in the past.

The European: After these deliberations, what are the essential features of the relationship between Europe and the US? What is the essence of the transatlantic relationship leading us especially to this unique partnership in security and defence?

Hans-Gert Pöttering: NATO is the most successful alliance in history. Europeans should never forget that without the US neither national socialism nor communism would have been defeated. NATO – with all its problems and difficulties – is in principle an alliance of freedom. This is the most essential thing. The essence of this unique partnership are our common values. I hope that this is the basis for our relationship also in the future not only in words, but also in action. But there are increasing doubts.

The European: Will Europe be able to meet future challenges by pursuing its own policy?

Hans-Gert Pöttering: History is always in a changing process. Each generation has its own challenges. Hopefully the US will remain our strongest partner. But they are not perfect, as we Europeans are not perfect. So Europeans and the world were misled when the Bush administration said that Saddam Hussein had weapons of mass destruction. It was taken as a reason to start the Iraq war – with consequences we all know. And Europeans made a similar mistake in Libya.

The European: Was Henry Kissinger right when he urged a policy to prevent China and Russia from ever becoming allies? Are Russia and China expanding powers?

Hans-Gert Pöttering: Yes, they both are expanding powers. For Russia we can name the examples of Crimea, East Ukraine, Abkhasia. For China, the South China Sea, the oppression of Muslims in Xinjiang, and destroying democracy in Hong Kong or the Tibetan culture etc.

The European: How can Europe meet these challenges?

Hans-Gert Pöttering: United and strong. If possible, together with the US. And at the same time, we should continue dialogues with Russia and China. We have to develop a double strategy: diplomacy and determination, based on strength. The High Representative of the EU, Josep Borrell, is working on that. We should support him. Without a common line and vision, Europe will not be able to meet these immense challenges.

The European: But aren’t we in the process of “losing” Russia, largely European in geographic terms, as a potential security partner?

Hans-Gert Pöttering: We should not have illusions, but we should never give up making the world a better place. For the time being, Russia is not a security partner, maybe tomorrow. But we should not be too optimistic. We are in great danger as far as hybrid warfare is concerned. It is one of the great challenges to convince our Russian partners to stop these activities, otherwise it must have consequences. And this would be a disadvantage for both sides. So there is a common interest for dialogue and cooperation.

The European: I see a Europe that is divided, with those countries who can see Russia as a future partner on one side, and those who had been under Moscow’s yoke for so many years and have a different feeling about their security, on the other. But do they all believe in the US and have an enormous mistrust towards Russia?

Hans-Gert Pöttering: So far, the EU has been more or less successful in giving a common answer to Russia’s aggression and occupation of Crimea. But sometimes a common attitude of EU countries is difficult. This is a reason for majority voting in questions of foreign and security affairs.

The European: Might NATO become the catalyst to bring them together and can the US thus become the promotor of a real European pillar in security and defence within NATO?

Hans-Gert Pöttering: The US – except under President Trump – was always in favour of a strong Europe at its side. But the work to be strong must be done by Europeans themselves. In the EU, there are some juridical problems with Poland. But as far as security and defence are concerned, the Polish Prime Minister Mateusz Morawiecky is speaking about a “real European army that can defend Europe in the south, east and north.” This is very encouraging.

The European:  Might the disastrous western crisis management in Afghanistan in mid-August 2021 have repercussions on cohesion within the Alliance and on future allied actions in peace making policy of NATO and the European Union?

Hans-Gert Pöttering: The developments in Afghanistan are a tragedy for the people in Afghanistan and for the West: politically, militarily and morally. When I was a student, I read a book, “The golden rule of consultation”. When President Trump’s administration negotiated the Doha agreement in February 2020 with the Taliban, the Europeans were not really consulted. They just agreed to the results. And the great disappointment is that President Biden did not really consult the Europeans when he decided to leave Afghanistan.

The European: Is this a turning point in the European-American relations?

Hans-Gert Pöttering: Certainly, I see it as a turning point. Why? For the time being we need the US to defend Europe. But what happens if the Americans are no longer willing to do it and we Europeans are unprepared? The only answer is that security and defence must become – besides climate change – one of the priorities of EU policy. We have to use the Biden years to prepare ourselves for the event that in American politics a policy might dominate that is not in solidarity with Europe anymore. We don’t want such a development, but if it occurs, we must be prepared.

The European: What are the consequences?

Hans-Gert Pöttering: We need European sovereignty, if possible always in cooperation and solidarity with the US. We have to develop such sort of capabilities. It is a question of political will and hopefully the Europeans learn from this experience. Without security, our freedom, our way of life is in danger. We have to wake up!

The European: Professor, my sincere thanks for this conversation.