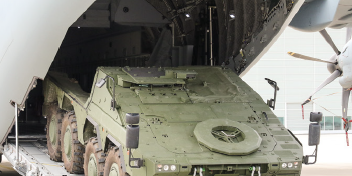 The European Union is continuing efforts to develop own defence capabilities in cooperation, adapting structures and creating financial instruments for security and defence. Although European armaments cooperation is still  in its infancy, the groundwork has been laid for drones, future air combat systems and ground combat systems – but they all involve political and technological risks.

OCCAR: a centre of excellence for cooperative programmes

The European: Mr Bisceglia, you have been the Director of the Organisation for Joint Armament Cooperation (OCCAR) in Bonn since 2019. OCCAR was established by Jacques Chirac and Helmut Kohl in 1995 to facilitate and manage collaborative European armament programmes throughout their life cycle. Is it a success story?

Matteo Bisceglia: Yes, it is! Twenty years ago, OCCAR’s initial Programme Portfolio consisted of a small number of programmes, but since then has progressively increased to 16 programmes with a total operational budget of around €80bn that OCCAR manages on behalf of its Member States and Non-Member States.

By managing programmes from the definition stage up to disposal, OCCAR lives up to both its mission and vision, becoming at the same time a valuable vehicle for the EU in its aim for strategic European defence autonomy.

The European: What are your systems of reference?

Matteo Bisceglia: OCCAR procures and delivers defence systems that should become the reference baseline within the European defence scenario. The organisation manages different and diverse armaments cooperation programmes such as, among others, A400M, FREMM, ESSOR, MALE RPAS, and Boxer whilst improving efficiency and reducing costs, along with contributing to strengthening the European Defence Technology and Industrial Base (EDTIB).

The European: OCCAR was founded in 1996 on the so-called French-German Principles of Baden-Baden (1995). Have you been successful in meeting the “juste retour” criterion, creating a global balance of work over several programmes and years?

Matteo Bisceglia: Through the global balance principle, nations have renounced the principle of juste retour, moving away from the application of “cost-share equals workshare” in order to achieve a global balance of work over several projects and years.

The European: Does that mean that OCCAR promotes greater freedom in the supplier selection?

Matteo Bisceglia: Indeed, and we achieve a more cost-effective approach, which is beneficial to national industries including Small and Medium Enterprises (SMEs), maximising the benefits of collaboration for strengthening the competitiveness of the EDTIB. This approach enhances the creation of complimentary industrial and technological expertise in the relevant fields between Member States, thus guaranteeing support for their own armed forces.

The European: Has the application of programme management procedures based on best practices led to cost effectiveness and competitiveness?

Matteo Bisceglia: To tackle cuts on defence spending, OCCAR strives to develop and optimise programme management methods to fulfil all customers’ expectations. To this end we adopt efficient procurement best practices, based on lessons learned and standard competition processes, thus improving the effectiveness of the EDTIB and delivering best value-for-money defence systems.

Matteo Bisceglia: OCCAR and EDA consider each other as complementary partners in the domain of cooperative European defence capability development and delivery. EDA identifies and initiates cooperative armament programmes in the preparation phase, whilst OCCAR implements and manages the follow-on phases. The NSPA is also a valuable partner through its support to a number of OCCAR managed programmes. Current agreements allow the NSPA to support OCCAR in the management of the MMF, A400M, COBRA and TIGER ISS (In-Service-Support) phase. We are all complementary.

The European: Could you describe two or three flagship cooperation projects with EDA and the advantages for participating countries?

Matteo Bisceglia: OCCAR manages the ESSOR and MALE RPAS programmes within the relationship with EDA. ESSOR has been selected as a project of the Permanent Structured Cooperation (PESCO), which led the Participating States to launch new ­ESSOR related projects in 2021 with the financial support of the EDIDP. MALE RPAS is planned to be delivered in 2028.

The European: OCCAR’s cooperation with the NATO Support and Procurement Organisation (NSPO) is based on a Framework Memorandum of Understanding from 2005. Have Canada and the United States manifested any interest? What are the two most important projects with NATO?

Matteo Bisceglia: There was no negative reaction from the US or Canada! On the contrary. The effectiveness of OCCAR has been recognised by the USA who recently decided to launch a new naval programme based on the experience gained from the FREMM design. OCCAR and the NSPO have created a collaborative environment, ensuring continuing success in programme management. Among the projects managed in cooperation with NATO, I would mention the A400M, where NSPA supports OCCAR in the management of the ISS phase, along with MMF, where OCCAR manages the Acquisition Phase on behalf of NATO.

The European: And your very personal view?

Matteo Bisceglia:  We are partners, not competitors. Every agency has its own strengths. Putting those into action and combining them can only be beneficial for any programme and for our customers, namely the nations.

The European: Director, what is OCCAR doing to preserve its future? Obviously, the organisation is looking at future business opportunities such as the Future Combat Air System (FCAS) or Main Ground Combat System (MGCS).

Matteo Bisceglia:  I am personally investing a lot of time and effort into the promotion of OCCAR, within the nations and industry, as the centre of excellence and first choice for managing complex cooperative programmes. In industry, I especially aim at SMEs as I believe they are the backbone of the European economy. Moreover, I try to convince nations that one common weapons system is more efficient and economical than multiple weapons systems with the same goal. However, the nations keep the final decision authority.

The European: OCCAR distinguishes between “Participating States” and “Member States”1. What are the criteria for each category and are you intending to enlarge one or both of them?

Matteo Bisceglia: OCCAR is composed of 6 Member States that provide high-level governance through a Board of Supervisors. OCCAR is a very lean and flexible organisation, able to adapt itself to the challenging and fast-paced defence environment. On the other hand, we are striving to widen the number of Participating States, and this is a key OCCAR principle.

The European: Mr Bisceglia, is it in OCCAR’s interest to keep the number of Member States low?

Matteo Bisceglia:  The more decision makers there are the more complex the decision-making process becomes, especially in an environment which needs unanimity for its decisions. The current strategic level based on six Member States has granted high flexibility and capability to quickly adapt and change the overall OCCAR organisation as needed, in order to effectively face the defence environment’s challenges. Therefore, the current situation is not about to change in the immediate future.

The European: And do the Participating States have less privileges as Member States?

Matteo Bisceglia: Firstly, OCCAR is an open house, meaning that every Non-Member Nation is welcome as Participating State in a programme as long as that nation accepts the OCCAR principles. Secondly, a Participating Nation has the same privileges and decision-making authority in the Programme Board of its programmes.

The European: Finally, what is the role of your Board of Supervisors (BoS)?

Matteo Bisceglia: The BoS directs and supervises the OCCAR Executive Administration. It is the highest decision-making body of OCCAR and decides on all matters concerning the implementation of the OCCAR Convention. lt consists of the six ministers of defence or their delegates. The BoS is assisted by four committees in specific areas: the Future Tasks and Policy Committee (also Audit Committee), the Finance Committee and the Security Committee. For day-to-day business, the ministers of defence have delegated the Board of Supervisors’ membership to their national armament directors or other appropriate representatives. The European: Mr Bisceglia, thank you for our conversation.