Strategy for European and NATO partnerships 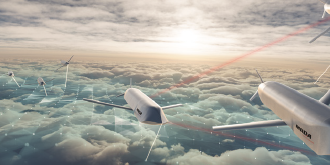 Contribution in missile technology to the EU’s strategic compass

The European: Mr Gottschild, MBDA was created in 2001 after the merger of missile systems companies from France, Italy and the UK, later followed by enterprises from Germany and Spain. Will MBDA further expand to become an even bigger European champion?

Thomas Gottschild: It is our natural aim to maintain and develop our role as an industrial leader in Europe. We continuously monitor the development of our own capabilities, opportunities for strategic partnerships, as well as mergers and acquisitions.

The European: What does this mean for your core business?

Thomas Gottschild: In our core business – missiles and air defence systems – we focus on the development of the skills of our employees and their working environment. We offer facilities and means to drive technological development and innovation in all the countries of the MBDA footprint. We hire highly qualified engineers, offer programmes to further develop their skills and set incentives for innovation. On the other hand, MBDA is part of strategic partnerships cooperating with companies all over Europe and in NATO territories, including startups and top-class SMEs. These startups and SMEs are indispensable in our production chain and are drivers for innovation and creativity for future capabilities. Finally, we continuously evaluate opportunities for mergers and acquisitions to gain new capabilities or strengthen our regional footprint.

The European: Since 2016 you have been the Managing Director of MBDA Deutschland GmbH, shortly MBDA Germany, and since 2018 the Executive Group Director Strategy of MBDA. What is MBDA’s 2040 horizon?

Thomas Gottschild: We live in challenging times. The needs of our customers are changing rapidly, requiring flexibility and creativity on the industry side, whilst budgets need to reflect this. Recent conflicts made clear that the protection of forces and valuable assets is becoming predominant, such as dominance in the air, at sea, and on the battlefield. On top, the relevance of space, cyber and subsurface military operations is growing.

The European: Indeed, these are many threats. How will you counter them with military means?

Thomas Gottschild: In this context, it is our aim to provide appropriate military effects against evolving threats in different domains and mission scenarios. Our customers need to use the means most suited to the different scenarios to achieve the appropriate effect against their adversaries. We support them with the right systems to manage these effects, be it missiles, lasers or electronic warfare.

The European: Could you elaborate on those systems?

Thomas Gottschild: MBDA is a key player in building critical future systems, such as Integrated Air and Missile Defence (IAMD) systems, Future Combat Air System (FCAS) or Main Ground Combat System (MGCS). There will be further ground, naval, air and space platforms with new capabilities and new weapon systems. Therefore, the need to develop new technologies, such as high-energy lasers, artificial intelligence, and hypersonic weapons, as well as new materials and manufacturing processes, is demanding for our engineers.

The European: New technologies will lead to new capabilities, as you explained. What are they?

Thomas Gottschild: They are systems and capabilities like Counter UAS, hypersonic strike and counter hypersonic missiles, collaborative engagement and others.

The European: There is a huge variety of upcoming systems and capabilities. You already mentioned the demanding task for your engineers, but what does an innovation push mean for your company?

Thomas Gottschild: To continue the MBDA story, we are building on our strengths. We have the right employees, efficient processes, modern tools and the appropriate industrial setup to play a leading role for this innovation push.

We are embarking on the renewal of our key products, while exploring the capabilities of next-generation systems. Accordingly, we are working on all key technologies, such as laser, hypervelocity, new materials, swarming, collaboration, artificial intelligence, or network-enabled missions.

The European: No single company can master all these technolo­gies on its own!

The European: The German Ministry of Defence (MoD) in Berlin – unreasonably for observers – stopped in 2020 the support for the Tactical Air Defence System (TLVS), better known under the name of MEADS and decided to extend the lifecycle of Patriot, the US system. Was there any political pressure from the US or did the German air force intervene, well known as US minded? Or was it the technological status of the system?

Thomas Gottschild: Only the MoD can answer these questions but let me describe the process up to now. In 2015, the German Ministry of Defence selected TLVS to develop a ground-based air defence system to counter a wide range of current and future airborne threats. Germany was confirmed to take a leading role as a framework nation in NATO to support other countries with a modern and pioneering system. Finally, we submitted a proposal, which met the needs of our customer and the requirements of the German Procurement Agency (BAAINBw). However, as we know from recent budget plans and announcements, the focus of the MoD has shifted.

The European: And what will be MBDA’s future role in German air defence?

Thomas Gottschild: Patriot will still be the basis of German air defence in the early 2030s. As a long-standing partner of the Bundeswehr in the Patriot programme, we will continue to play a leading role in the expected extension of Patriot’s service life. We are eligible to contribute to European programmes like Twister, an initiative for Timely Warning and Interception with Space Based Theatre Surveillance. On the other hand, we can also address Short Range and Very Short Range Air Defence.

The European: In fact, if I understand correctly, your expertise is bringing MBDA Germany in the position to contribute to all layers of air defence. But is there any hope for a revision of the MoD’s decision on TLVS?

Thomas Gottschild: Formally, it is still an ongoing procurement process and according to the capability requirements of Bundeswehr the introduction of TLVS is vital with the current and developing threat situation in mind. Developments in the field of hypersonic missiles, and new intelligent missiles emerging in several countries around the world, underline this need. It is not about our hopes; it’s about what the Bundeswehr needs in the long run.

The European: Europe is said to be lagging behind China, Russia and the US in terms of technology eg high-tech issues of laser and hypersonic weapons. Are you within the MBDA family’s Research and Development (R&D) capabilities able to close this gap?

Thomas Gottschild: With its universities, research facilities and a strong industrial base, Germany is still a motor for innovation and technology. Other countries in Europe, like the home countries of MBDA, are in the position to claim the same for themselves. What needs to be improved are the respective national and European frameworks to support the inherent industrial capabilities for innovation and efficiency. The EU’s Permanent Structured Cooperation (PESCO) Framework and the European Defence Fund (EDF) are European initiatives to support meeting these objectives.

The European: Could you give an example of fields where MBDA has the most advanced technological capabilities?

Thomas Gottschild: One example within MBDA is that already in 2003 Bayern Chemie, an MBDA subsidiary, developed a hypersonic missile reaching Mach 7 near ground, up to now an unbroken record. We continued this early work and developed concepts for interceptors on a national basis as well as in the European PESCO Framework.

Another field covers laser weapons. We are developing a demonstrator for integration and testing in 2022 on the F124 Fregate ”Sachsen” of the German navy. The German navy will use the demonstrator to test capabilities such as operation, the interaction of sensor technology, tracking and effect as well as the rules of engagement on board the frigate.

The European: Will a broad field of requirement in the future be the support of forces’ mission planning?

Thomas Gottschild: You are fully right and that is why our main goal is to support the mission of our customers. MBDA develops advanced tools for mission planning and I give your readers the example of the next generation anti-ship missile “Teseo”. The intelligent tools for Teseo provide a fast reaction time, while mission parameters are adjustable via a two-way data link to the real time tactical picture. This allows target update, reassignment as well as mission abort.

The European: Mister Gottschild, those examples may give evidence that the German and European industry has the joint capabilities to work on eye level with the China, US and other leading nations worldwide. Let me encourage you and thank you for this conversation.

France and Germany must unite their interests in a common global strategy
24. December 2021