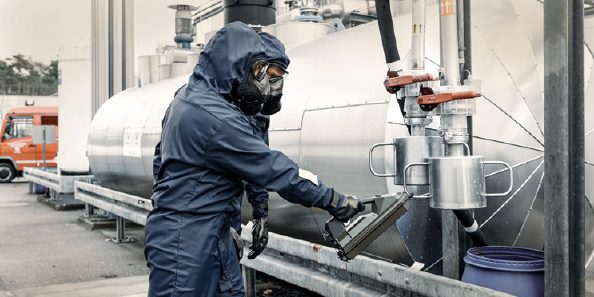 esilience is a term that has been increasingly used in the recent past to describe the capability of a community, organisation, state or society to withstand threats, catastrophes or any other substantial hardship which it may encounter. The major driver of the level of resilience is the trust of the people involved in the ability of their government, command structure or organisation to deal with the situation and protect their lives and their standard of life. The higher this trust, the higher the resilience. But it goes without saying that the organisation entrusted to deal with the situation needs to have the wherewithal in equipment and trained personnel to live up to the task.

Harrowing news in the media

Regardless of what news medium we look at, it seems that the world has certainly taken a turn for the worse. Natural disasters of various kinds, man-made threats in the form of armed conflicts, terror or hazmat incidents or the pandemic with all its repercussions form a major part of our daily news diet.

Of course, many of these situations have occurred in former times as well, however, one may think that the resilience of societies, states or organisations has been higher in the past. There may be a plethora of reasons for this impression. One of them might be the missing balance between communicating a threat or incident on one hand and the capabilities at hand to deal with the situation on the other. The latter is hardly ever addressed in widely distributed media.

When it comes to incidents involving Toxic Industrial Chemicals (TICs) and Toxic Industrial Materials (TIMs), societies are reacting very attentively and with fear of being powerless. This feeling of powerlessness is often due to a lack of information about official possibilities and capabilities for protection and resistance. But there are strategies and means to counter it.

There are four main areas defining the capabilities to respond adequately: Intelligence, Detection, Identification and Monitoring (DIM), Recovery and Protection.

I would like to focus on the area of protection. Of course the capabilities are influenced by the number of available personnel, their training levels and of course the technical equipment.

Whereas collective protection can shelter large number of people not necessarily involved in dealing with an incident, it is individual protection which defines the resilience of the military or civil responder.

Well known from pictures from the news are the heavy, impermeable, pressurised suits used by responders, mainly firefighters, when dealing with spills or leakages involving TICs or TIMs. Since the location of the threat is known and the boundaries of contamination established, there are not many unknowns left. Yes, wearing such a protective suit is putting a heavy burden on the responder, but he or she knows exactly that the suit will protect him or her and the time spent working in the suit is limited. The level of resilience of the responder is high, because the level of protection is high, and the duration of suffering is limited.

In unclear and undefined situations however, where neither the location nor the threat is known, the resilience of the responding individual is certainly in danger of decreasing. Since the potential tasks for the individual may involve more physical activities and longer periods under protection, it is mandatory to reduce the additional burden due to the protective suit.

Though comfort in these conditions seems to be a relative term, there are two important factors to look at in this regard. Apart from the ability to move as freely and unobstructed as possible, the reduction of the heat stress and the capability of the protective suit to remove water vapour from the skin and from the interior of the suit as quickly as possible are of utmost importance for the individual whilst maintaining its protective characteristics against chemical and particulate hazards for long periods of time, even after multiple washing cycles.

There are different technologies available affecting the removal of water vapour either by diffusion or by active air flow through the protective garment. The latter obviously requires a filtering technology, which is able to immobilise the hazardous compounds away from the skin whilst allowing an airflow comparable to normal garments used in non-CBRN or non-hazmat missions.

One of the most widely used filter materials is based on spherical activated carbon adsorbents and is known under the SARATOGA® brand.

The adjustable properties of the specific activated carbon in the adsorptive layer and the combination with further functional layers for aerosol protection, flame retardancy or colour/camouflage allow a user- and mission-specific configuration of the material performance. Depending on the operational needs, the materials can be implemented into different garment concepts, such as CBRN protective overgarments, duty uniforms, undergarments, which can all be completed by CBRN protective boots, socks, gloves or separate head protection like balaclavas.

The technology is currently fielded with more than 60 nations, including most of the NATO Member States, with users ranging from military ground forces and aviation personnel, civil users like first responders, CBRN specialists to police forces.

Based on the excellent wear physiology and the proven high level of protection the individual equipped with such a suit starts his or her mission with a high degree of trust to finish it unharmed and with the confidence to be able to finish the mission without testing his or her stamina to the limit.

This confidence in the protective equipment coupled with a thorough training regime wearing a training suit with similar wear characteristics to the “life” suit obviously add to the resilience of the individual, its organisation and ultimately to the trust of the populace into the capability of their state organisations to deal with any CBRN threat coming their way.

Sebastian Meyer-Plath is the Sales Director at BLÜCHER GmbH. After graduating in Microbiology at the University of Bonn, he joined Bruker Daltonics in Bremen and held the positions of Product Manager and Head of Military Sales. After a term with the German bio startup Advalytix GmbH in Munich, he joined Smiths Detection in Watford, UK, as the VP Sales & Marketing. Coming back to Germany, he was President of the Bruker Detection Division and a member of the Management Team of Bruker Daltonics, before joining BLÜCHER GmbH in 2020. Sebastian currently holds the rank of Lieutenant Colonel in the CBRN Defence Corps of the German Army as a reserve officer.