The European Union is striving for more influence in the Arctic 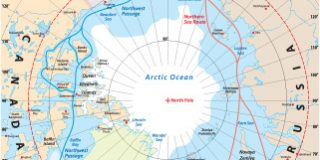 The Joint Communication on ”A stronger EU engagement for a peaceful, sustainable and prosperous Arctic” (https://bit.ly/3npDlii ) presented by the EU High Representative and the European Commission on 13th October 2021, cannot hide the fact that the Union has had problems gaining appropriate diplomatic status with the Arctic Council, as well as with its own long-standing Arctic policy.

The role of the European Parliament (EP) in the Arctic issue was highlighted by a report adopted a week before the Joint Communication, on 7th October 2021, on “The Arctic: opportunities, problems and security issues” (https://bit.ly/3I4xZ3A). It aired clear concerns about Russia’s aggressive military build-up in the Arctic and China’s projects around the North Pole.

This Communication, described by the High Representative, as a “driver” for the EU’s strategic thinking, was definitely needed to shift the Union’s 2016 strategic approach to the Arctic from promoting sustainable development and calling for military restraint to making the Union’s Arctic policy a priority of its Green Deal. Indeed, this was the very point made by Commissioner Virginijus Sinkevicius in his presentation on 13th October.

At the end of the last century, the EU, aware of the growing importance of the Arctic and observing the Arctic Council’s[1] policy from the outside, felt the need to request an ad-hoc observer status at the Council.

For many years, its efforts to obtain this status were unsuccessful. In 2008, when the EP published a resolution on “Arctic Governance” calling for an “international treaty on the protection of the Arctic environment”, the initiative irritated the Arctic coastal states (CA, DK, N, RU, USA). Finally, however, in 2013 the Union was offered the somewhat discriminatory status of “permanent guest”, which it accepted.

In 2016, the Commission released a Communication on “EU Integrated Arctic Policy” pointing out Russian military activities in the Arctic and China’s positioning with its Polar Silk Road planning.[2] To the Arctic Council’s disappointment however, the Communication did not fulfil expectations concerning the EU’s strategic positioning but climate change was already one of the three priorities, together with sustainable development and international cooperation.

One of the leading experts on the Arctic, Ambassador Laurent Mayet, chair of the think-tank “Le Cercle Polaire” in Paris and former French Ambassador for Polar Affairs (2009-2016) described, in a paper for the Robert Schuman Foundation, the Union’s naïve position in its 2016 Communication: “The choice has now been made to state bluntly, and without euphemism, that the current geostrategic situation involves the security of European citizens.” (https://bit.ly/3K0Q30q ). This approach contrasts sharply with the spirit in which multilateral diplomacy on the Arctic was developed at the end of the Cold War.[3]

The shift to a new engagement

The recent Communication contains a more innovative approach, supported by concrete proposals such as the creation of a European Commission office in Greenland to “raise the profile of Arctic issues in the EU’s external relations”, a financial package to support the green transition for the benefit of Arctic peoples, and an indefinite freeze on exploitation of fossil fuel in the Arctic.

[2]   This magazine will continue reporting on the Arctic region in the next edition with an analysis of the military situation.

[3]   The initiative was launched by Mikhail Gorbatchev, president of Soviet Union, in a speech in Murmansk on 1st October 1987, calling for the creation of a regional cooperation body for making the Arctic a demilitarised and nuclear-free zone of peace.