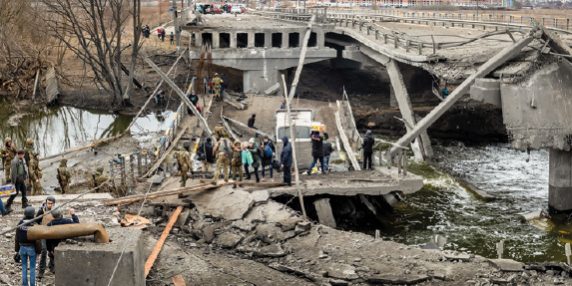 ertainly, the invasion on 24th February 2022, long prepared by the ever tighter military encirclement of Ukraine, marked the culmination of the gradually deteriorating relationship between Russia and the West. But this development had several “watershed moments”. Despite the view that Putin was pushed into a corner by NATO enlargement, by US condescension, etc., the West has not done everything wrong; it has made manifold offers for cooperative security.

It is true that since 1991 the systematic debate about Russia’s place in the European security architecture was missed and that successful development of the NATO-Russia Council was botched. But what President Putin calls security “interests” vis-à-vis a genuinely defensive Western alliance are at best political-psychological sensitivities: a humiliation complex as loser in the Cold War, “imperial phantom pain” (dissolution of the Soviet Union as the “greatest geopolitical catastrophe of the 21st century”) and frustration at not being recognised as a great power – unmindful of the fact that respect is earned, not enforced.

Putin’s Russia has thus become an international spoiler state whose only real “interest” seems to be keeping democratic developments – as a threat to his power system – away from Russia’s borders. After all, repression in Russia tightened after the 2011 demonstrations against the fraudulent presidential elections. That “interest” is increasingly superimposed by Putin’s flawed interpretation of the history of Ukraine as part of Greater Russia with no right to its own statehood.

In retrospect, some claim that an opportunity was missed when, in 2001, as new Russian President, Putin made a forthcoming speech to the German Bundestag, speaking in German and appearing very civil and mannerly. However, Western offers of inclusion and cooperation followed, and NATO enlargement was “cushioned” with the conclusion of the NATO-Russia Founding Act (1997), in which both sides declared not to be adversaries anymore.

However, biographical evidence suggests that with his background in the KGB, the way he rose to power and in light of his bitterness at witnessing, in Dresden, the fall of communist East Germany without Soviet military intervention, Putin has been on his revisionist “path of revenge” since 1989. Sergei Karaganov sees Russia in the same situation as Germany after the Versailles Treaty. Absurd but indicative.

Some “watershed moments” must be seen in this light: the Kremlin’s wrath at NATO’s Kosovo air campaign in 1999 (at whose origin stood Russia’s refusal in the UN Security Council to compellingly warn Serbia’s President Milosevic to stop violent “ethnic cleansing”). Russia left the NATO-Russia Council, for which it was harshly criticized by NATO, who made the same mistake though during Russia’s war against Georgia in 2008. This was preceded by Putin’s angry “We are not taken account of” speech at the Munich Security Conference in February 2007, to which one should have listened more carefully. And Putin’s irritation about NATO’s Bucharest Summit Declaration, offering Ukraine and Georgia the prospect of membership, was not taken seriously.

A genuine “watershed” came with Ukraine’s “revolution of dignity” in March 2014. In Putin’s eyes it was a “fascist coup”, which served as a pretext for the subsequent steps: Shortly afterwards, Crimea was occupied and annexed in violation of international law, and with Russian active military support, criminal “separatists” started a war in the Eastern provinces of Luhansk and Donetsk, turning them into autonomous “republics”. The distribution of Russian passports greatly increased the number of Russian citizens which Putin says he is obliged to “defend”.

It is clear now that NATO did not react vigorously enough at the time to show Russia’s leader clear limits. But even without taking military action in support of Ukraine, it was resolved to effectively protect all Allies – particularly those in the East whose latent security concerns became manifest. At its summit meeting in Wales (September 2014) the Alliance took far-reaching decisions regarding readiness, air policing, military presence, exercises and defence spending. Most spectacularly, the 2016 summit in Warsaw initiated the “Enhanced Forward Presence” with multinational battle groups in Estonia, Latvia, Lithuania and Poland – a visible expression of article 5 of the Washington Treaty which states that a military attack on one or more allies is considered an attack on them all.

But the West should have been aware that 2014 was not the end of Russia’s aggressive behaviour, and should have tailored warnings, sanctions and “naming and shaming” accordingly. In spite of warnings from Eastern Allies and in contrast to its declaratory policy, “business as usual” continued in many respects. As late as 2015, the Nord Stream 2 gas pipeline project between Germany and Russia was started – as a “purely economic” endeavour, but for Russia with very definite geopolitical overtones.

With so much guilelessness, tolerance in view of the concentration of Russian troops on Ukraine’s borders over many months, credulity towards the Russian leader’s lies in high-­level meetings, hope for the “small-scale” option, one can indeed see in the full-blown invasion of Ukraine the “real” watershed moment. Now even the slowest and most naïve “heard the shot”, and even Germany, in the end almost isolated, accepted the disconnection from SWIFT, “suspended the certification” of Nord Stream 2, made a U-turn regarding weapons deliveries to Ukraine and pledged the necessary wherewithal for the hollowed-out Bundeswehr, including meeting NATO’s 2 % goal for its defence budget. Sweeping NATO decisions followed with a view to further reinforcing the Eastern flank, not least by additional US troops. In spite of its increased focus on China, the US is once again a “European power”.

Apparently, the Russian President, isolated in the Kremlin, unaware of Ukraine’s development over the past 30 years, giving orders to his top generals across a distance of 10 meters, has badly miscalculated: about the unity of NATO, the EU and the G 7; about condemnation by large parts of the international community (141 votes in the UN General Assembly); about the severity of financial, economic and individual sanctions. And above all about Ukraine’s military capabilities, preparations and determined resistance. So, the original plan for a “subjugation blitzkrieg” failed, logistics were not put in place for such long distances over such an extended period, reconnaissance and tactics were poor, and Russian soldiers’ morale is pitiable. The charismatic President Zelensky has become the face of freedom, while Putin appears as the incarnation of the “folly of tyrants”.

In his frustration, the Russian President has moved to the Grozny and Aleppo type war against cities, terrorising the civilian population and heaping war crime on war crime. But even if he has already lost the war as it was envisaged, he can still inflict immense damage and suffering, dismember the country, send in Syrian, Chechen and Wagner militia fighters and hunt down the Ukrainian leadership. But Ukraine will not capitulate – between self-assertion on the one hand and neutrality with demilitarisation on Putin’s terms on the other, a diplomatic compromise is unimaginable.

For the West this means continuing military support to Ukraine with all the necessary weapons, maintaining and even intensifying the pressure on Russia, sustaining its own cohesion, organising cooperation between NATO and the EU and increasing the credibility of its deterrence posture as well as defence preparations. The protection of all Allies must be unquestionable. Furthermore, Allies should stop being deterred (and proclaiming this all the time) by Putin’s tempers, bullying and threats for fear of “provoking” him. For his long-planned war against the “brother nation” he did not need any “provocation” in the first place!

Dr Klaus Wittmann, Brig Gen (ret) was born in Lübeck in 1946. He is Senior Fellow at the Aspen Institute Germany and teaches contemporary history at Potsdam University. In 2008 he ended a 42 years career in the German Bundeswehr service that included troop command, academic phases (university studies in history and political science as well as a year at the International Institute for Strategic Studies, London), political-military work in the German Ministry of Defence and at NATO Headquarters, and positions in higher military education. His last assignment was Director Academic Planning and Policy at the NATO Defence College, Rome.