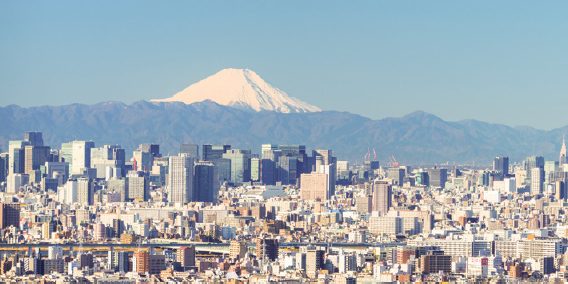 by Professor Hideshi Tokuchi, President of the Research Institute for Peace and Security (RIPS) and Indo-Pacific correspondent of this magazine, Tokyo

ussia’s invasion of Ukraine is a blatant violation of established international law, swaying the rules-based international order. As it is an outright challenge to the global order, it will affect the stability and security of the entire world including the Indo-Pacific.

In the same way that European security is indivisible, as clearly described in the EU’s Strategic Compass, world security is indivisible. In his address to the Japanese National Diet, Ukrainian President Zelensky said that he did not see any distance between Kyiv and Tokyo. He is absolutely right, because today’s world is so connected that there is no such thing as security only for Europe or only for the Indo-Pacific.

In fact, Russia is a resident power of the Indo-Pacific, too. The Russian navy has been operating more actively in northeast Asia these days. Russia continues to illegally occupy Japan’s Northern Territories and said recently that it would suspend peace treaty talks with Japan in response to the latter’s sanctions on Russia. China and Russia are colluding with each other, saying in the recent Joint Statement that their relations are superior to cold war alliances and that their friendship has no limits.

In the same Joint Statement, Russia reaffirmed its support for China’s position on Taiwan. The Taiwanese are more concerned about their future, saying that today’s Ukraine is tomorrow’s Taiwan. Indo-Pacific regional countries are carefully watching if and how the situation in Europe will affect China’s options toward Taiwan.

Meanwhile, North Korea will never abandon its nuclear ambition, probably believing that Russia’s nuclear blackmail makes the US and NATO hesitate in direct military involvement in Ukraine. In the past, North Korea said that Iraq and Libya collapsed due to their lack of nuclear weapons. It is highly possible that North Korea believes that if Ukraine had not abandoned nuclear weapons, Russia could not have invaded. ICBM-capable North Korea is not a regional threat, but a global one.

Japan, neighbouring Russia, China and North Korea, is more vigilant than ever. The Japanese are also concerned about the possibility of China’s use of force against Taiwan, likening the Ukrainian situation to Taiwan. Even before the Russian invasion of Ukraine, the expression that a Taiwan contingency is a Japan contingency was becoming popular in Japan, particularly because of the geographical proximity of Japan to Taiwan and because of the strong partnership and friendship between Taiwan and Japan. According to a Japanese opinion poll conducted in March, more than three quarters of the respondents were concerned about the possibility that the Russian invasion of Ukraine would affect the situation involving Taiwan. According to another poll, nearly 80% of the Japanese respondents believe that Japan’s own national security has been threatened by the Russian act.

Allies must cooperate in the Indo-Pacific

The situation involving Ukraine clearly shows that no single country can achieve its national security all by itself. Partnership of like-minded countries has proven to be indispensable in the past several weeks.

The role of the United States…

Moreover, after the Russian invasion, the international community has proved that US leadership is highly expected. In his address to the US Congress, Zelensky wished for US President Biden to be the leader of the world, but he did not say the same to the leaders of any other countries. The US leadership role remains important, but what the US can do on its own is more limited than before as internal division of American society holds back its power for international security. Therefore, US allies must help the US to stay engaged in world affairs. NATO will continue to do so in the Euro-Atlantic context in close cooperation with the EU. Japan and other US allies in the Indo-Pacific will do so in the Indo-Pacific. US allies in both areas must work together, helping the US, in order to counter the formidable adversaries: Russia, China and North Korea.

… and of the European Union

The war in Ukraine will be protracted. The economic sanctions will continue to be imposed for a long time, and accordingly, Russia will decline. Instead, China will continue to rise and the US-China competition will be intensified, affecting every corner of the globe, even including the Arctic. Meanwhile, India will remain autonomous and is not on the same page as the west in countering Russia, while remaining tough on China. The Indo-Pacific, northeast Asia in particular, will be a focal point and the frontline of the great power rivalry.

The EU’s continuous engagement with the Indo-Pacific has tremendous significance for Japan as the latter directly faces the military threats of the three authoritarian powers. Last year, Germany sent a navy frigate to the Indo-Pacific, and it was highlighted and well received in Japan as a positive sign of the European engagement to the region. Even without such a visible sign of security engagement, the EU and Japan will be able to work together to enhance the rule of law and the rules-based international order. The EU’s engagement in the Indo-Pacific will contribute to European security and enhance the national interests of the Europeans in this globalised world.

The EU and Japan established a comprehensive framework for partnership in 2018: EU-Japan Strategic Partnership Agreement. Capitalising on the momentum generated by this wide-ranging agreement, the EU and Japan should work together in a variety of security-related areas including in crisis management, prevention of the proliferation of weapons of mass destruction, the International Criminal Court, reform of the United Nations, maritime affairs and cyber issues.

“The Japanese are concerned about the possibility of China’s use of force against Taiwan, likening the Ukrainian situation to Taiwan.”

joined the Defense Agency (the predecessor of the Ministry of Defense) of Japan in 1979 and served as Japan’s first-ever Vice-Minister of Defense for International Affairs from 2014 to 2015 after completing several senior assignments including Director-General of the Defense Policy Bureau. He is the President of the Research Institute for Peace and Security (RIPS) and teaches international security studies as a visiting professor at the National Graduate Institute for Policy Studies (GRIPS).