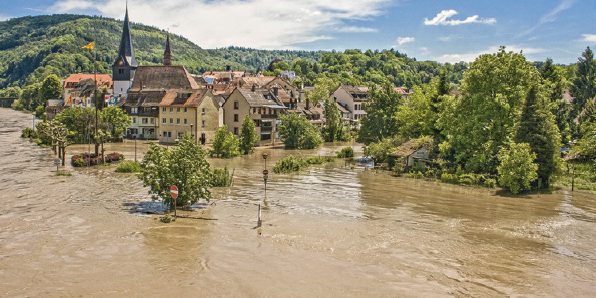 Climate change has become humanity’s greatest challenge. The effects of global warming – melting polar ice caps, rising sea levels and, above all, an increase in extreme weather events – can now be felt worldwide. Accordingly, many states have declared climate change a national security issue of high priority. In a study by the Davos World Economic Forum, “extreme weather” and “climate failure” are at the top of the risk scale – far ahead of cyber-attacks and weapons of mass destruction.

This should not come as a surprise. The security consequences of global warming, which will only become fully apparent in the coming years, are dramatic. These include natural disasters triggered by an increase in extreme weather events, such as floods, endangering the political and economic stability of poorer states in particular. The decline of arable land as well as droughts and shifts in growing seasons can lead to crop failures and a dramatic increase in food prices. Rising sea levels and the simultaneous desertification of large areas of land could trigger migration flows, and disputes over habitable land or drinking water could erupt into military conflict. The melting ice caps at the North Pole create new sea routes, thus opening up new economic perspectives, but also turning the area into one of renewed geo-military competition. In short, climate change will dramatically exacerbate already existing tensions in international relations.

The climate dimension in NATO activities

However, climate change is not only a “threat multiplier”. It will also determine where and how NATO forces will have to operate in the future. A strategic environment that is altered by climate change is already posing significant military-operational challenges for the armed forces. For example, the changing salinity of the water in the Gulf of Aden has led to the failure of frigate turbines. NATO forces in Afghanistan have had to contend with high temperatures for years, resulting in a significant loss of aircraft take-off power and payload. The increase in sandstorms makes the planning and execution of military flights difficult. Soldiers stationed in Iraq have to endure temperatures of 50C and more – temperatures for which their equipment is not designed. Rising sea levels are endangering numerous naval bases, while damage to military inland installations caused by extreme weather events is steadily increasing.

For NATO, which has set itself the goal of adapting to climate change, these developments result in some straightforward requirements. First, the Alliance needs a comprehensive assessment of the impact of global warming on its strategic environment as well as on its operations and the supply of reinforcements. Most importantly however, NATO needs to integrate the climate dimension into the full range of its activities. This includes, for example, defence planning, civil emergency planning, standardisation, military exercises and disaster relief. In the future, allies’ procurement policies must also reflect military requirements for operations in an altered climate. The allies have set out these and other steps in the “NATO Climate Change and Security Action Plan”, which was adopted at the 2021 Brussels Summit and is now being implemented.

The most ambitious dimension of NATO’s new role in climate security is the goal of contributing to climate change mitigation. To this end, NATO will first develop the analytical basis for measuring greenhouse gas emissions of military activities and facilities. This would enable a comparison of national military emissions, which in turn should help allies formulate targets to reduce emissions voluntarily. At the same time, the collection of comparable data on military energy consumption could have a positive impact on future national innovation and investment decisions with a view to developing more energy-efficient armed forces.

Reducing the greenhouse gas emissions of NATO countries’ armed forces inevitably raises the question of feasibility. Clearly, maintaining NATO’s military competence must always remain a priority. Therefore, a reduction in emissions, eg by gradually phasing out fossil fuels, only makes sense if it does not impair or – better still – increases the operational effectiveness of the military. In fact, experiments conducted in the armed forces of several NATO countries show that reducing emissions and increasing military effectiveness are not necessarily at odds with one another. Just as today’s cars are cleaner, yet more powerful than previous models, military equipment can also become “greener” without sacrificing combat effectiveness.

For example, the Italian and United States’ navies have jointly tested biofuels, the production of which no longer requires food produce (eg rapeseed). New marine turbines use less fuel and are cleaner. The armies and air forces of some NATO countries are also experimenting with biofuel additives, hydrogen fuel cells, electric vehicles and improvements in aerodynamics. NATO is supporting a project to reduce diesel consumption at remote military bases by offloading traditional diesel generators through the computerised use of wind and solar power. Many of these experiments were initiated because of the need to save expensive fuel or to reduce the logistical burden on the armed forces. However, since these technological innovations will ultimately also lead to a noticeable reduction in CO2 emissions, they are not only important militarily, but also politically.

The idea of sustainability is gaining traction

These developments show that the idea of sustainability is gaining traction also in the military. However, one needs to temper overly euphoric expectations, notably with regard to the reduction of military emissions. Military equipment requires many years of development before entering into service, and it remains in use for several decades. New, energy-saving and “clean” technologies are no exception. They need to be developed and acquired, integrated into existing national forces and made interoperable with other allies’ equipment. This is a tall order, which does not lend itself to quick fixes.

Russia’s attack on Ukraine has shown once again that NATO’s main job remains to secure peace and stability. Global warming may change the way NATO goes about implementing this task, but it does not change its fundamental importance. Consequently, preserving NATO’s military competence remains paramount and must not be jeopardised for the sake of creating a “greener” image. For a considerable time to come, NATO’s armed forces will continue to consume large quantities of fossil fuel. Stigmatising them as contributors to climate change while ignoring their existential importance for national and collective defence would be grossly negligent. Military security as well as climate security are of truly existential importance. They must not be pitted against each other.