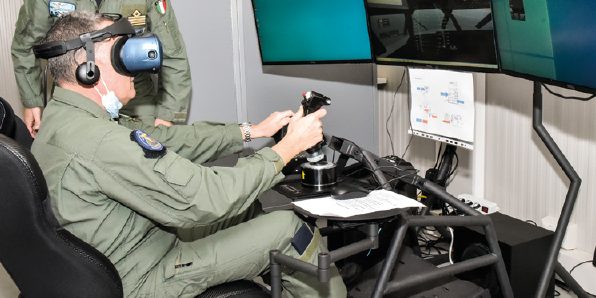 After the appalling and totally unjustifiable Russian aggression against Ukraine and with a fully-fledged war now raging at the European Union’s doorstep, there is today a common understanding – probably stronger than ever before – that Europe needs to do more for its own security and defence. Even the US has started to acknowledge this, provided it does not undermine NATO, which, needless to say, remains more than ever the cornerstone of Europe’s security and defence. But what is required for Europe to take on more responsibility in defence and even – let’s be ambitious – become a security provider on a regional and global scale? I see two main prerequisites for that to happen, both of which are true challenges intrinsically linked to the European Defence Agency’s core mission and activities: cooperation and innovation.

Cooperation is the only way forward to make Europe a global player, especially in the security and defence realm, as none of its countries has the resources or capabilities to ensure stability and security on its own – not for itself and even less so for the whole of Europe. Hence the need to join forces and invest more, and better, in defence. Since the Russian invasion of Ukraine at the end of February, things have already started to move as several European countries – Germany for instance – have pledged to review and increase their defence expenditure considerably. This is a long overdue step in the right direction, no doubt about that. But more spending does not automatically guarantee more resilience, efficiency or interoperability. To achieve that, Europeans must plan and invest better through cooperation: from joint priority setting to the development, procurement, and deployment of cutting-edge capabilities. Over recent years, EU Member States have put a defence planning framework in place at the European level with the Capability Development Plan (CDP), the Coordinated Annual Review on Defence (CARD), the Permanent Structured Cooperation (PESCO) and the European Defence Fund (EDF). This is an achievement. But having cooperation tools in place is not enough; they must also be systematically used to make EU defence cooperation the norm. And even then, the proof of the pudding is in the eating: cooperation must lead to concrete projects which must produce outcomes, ie usable defence capabilities. Several cooperation platforms are available to do that, including the EDA which has gained robust expertise and a track record in initiating and managing collaborative capability programmes. PESCO is another framework for cooperation for the 25 EU member states that participate in it. Finally, the EDF must serve as a financial incentive and co-finance such collaborative projects.

Systematic defence cooperation is thus the first box Europe must tick if it wants to shoulder more responsibilities in defence and become a security provider.

Secondly, the EU must also be able to master cutting-edge technologies and their integration into defence products. To do that, it must be at the forefront of defence innovation. Right now, unfortunately, this is not the case: Europe still lags behind in terms of researching, developing and applying high-tech for defence purposes, and it is even further losing ground in relation to the US, China and other powers who heavily invest in it. With the rapid development of new and often disruptive technologies in the civilian world and their fast weaponisation – Artificial Intelligence (AI), big data, robotisation, autonomous systems, nanotechnology, digitisation, human-machine teaming, biotechnology and hypersonic technologies to name only a few – today, more than ever before, innovation has become a geostrategic factor that shapes the international security environment and, eventually, global balance of power. Therefore, the vital choice for Europe is clear: defence innovation or defence irrelevance!

To fully embrace defence innovation, the EU and its Member States need to do much more. And we must do it together, because joint innovation activities, done in collaboration, guarantee better value for money than today’s fragmented efforts. The good news is that our member states have understood this – and they are ready to act.

The EDA is set to play a key role in that ambition. Indeed, in May 2021, the EU foreign ministers called for a reinforcement of the agency’s role in fostering defence innovation, including disruptive technologies. Then, in November, defence ministers debated this topic where the idea of setting up a hub for European defence innovation within the EDA was discussed. Since then, this proposal has gained traction and support from more and more Member States, and we hope that a political decision in favour of such a hub can be made in the coming months. Let’s be clear: we are not talking here about creating an EU type of ‘DARPA’ (the US super-agency) or turning the EDA solely into a European defence innovation agency, because this would be neither relevant nor realistic in the short term. Rather, the EDA should complement and support national bodies by bringing Member States’ defence innovation bodies together, by serving as a network of all existing national innovation centres around Europe and promoting synergies with the industrial sector. Because Europe’s problem is not so much that there is no or little technological potential, on the contrary. Some of our Member States have very efficient research communities in many technological sectors, but the whole innovation effort is very fragmented, and this is a problem. So, it’s all about connecting the dots and creating synergies. That’s why the EDA, as the European platform for defence cooperation, is the right place to host the innovation hub and enable those synergies. All this will, of course, be done in close coordination with the European Commission or future NATO innovation structures.

In parallel, the EDA continues of course to initiate and manage collaborative defence research and technology (R&T) projects as we have been doing since 2004. Right now, numerous agency projects deal with the impact of disruptive technologies on the future battlefield. Take AI, for example, that can be used to support the decision-making of commanders, control swarms of drones or to simulate an opponent in training. Other projects are related to hypersonic systems, the use of concentrated energy and lasers for the military, new materials or 3D printing to produce spare parts at the site of operations, to name only a few.

To conclude, Europe will only become a relevant and credible security and defence player if Member States join their forces to innovate, plan, develop, produce and use together the top notch defence capabilities they will need in the future. Cooperation and innovation must go hand in hand – and both are at the heart of the EDA’s work.