Ukraine between the Atlantic and the Urals 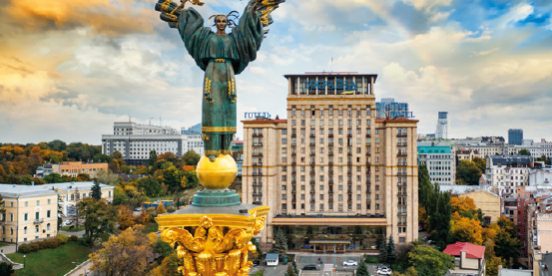 The Russian aggression in Ukraine, a human tragedy of a bygone era, harks back to the European wars of the 20th century. It bears all the marks of Russian brutality, strategic frustration and a radical political project that has ended badly. Russia is gambling its respectability and its future and Europe its reunification for the next decades.

The dialogue of the deaf between Washington and Moscow since the summer of 2021 under the Biden presidency ended up triggering a strategic vicious circle that culminated in the Russian invasion of 24th February. The 27 Member States of the European Union (EU), amazed and anxious, have hastened to try and unblock a European defence project that lacks strategic coherence. France, as president of the Council of the EU, has desperately attempted to maintain contact with the Kremlin and initiate a de-escalation. But once again in Europe, weapons have spoken louder than words and civilian populations are the victims. A new era begins with this disturbing flashback.

The West was alarmed…

This brutal assault has taken experts and diplomats by surprise, except in Washington, which hastily moved its embassy from Kyiv to Lviv on 13th February as a Russian invasion became imminent. However, the Russians had already attempted to gain some degree of political legitimacy by invoking the need for action to protect the Russian-speaking populations of the Donbass, who had been exposed since 2014 to the non-application, assumed by Kyiv, of the Minsk agreements of 2015. This enabled Russia to justify its actions and underpin it with diplomatic pressure. The full-scale invasion that started on 24th February was therefore a surprise and caused hesitation among traditional allies, initially anxious to avoid any appearance of belligerence in support of the attacked Ukraine. The radical firmness of the former members of the Warsaw Pact and collective fear at the Kremlin’s nuclear posturing also came into play. Many were quick to conclude that it was a war against the West or even the premise of a third world war. And the idea of the NATO defence alliance, that had lost its raison d’être, was quickly reactivated.

Some strategists have argued that Russia’s war against Ukraine was perhaps not so much intended as a military challenge to the West than the consequence of a refusal to provide formal security guarantees to Russia as it continued to denounce the continuous progression of NATO towards its borders. After all, German reunification in 1990 had been acknowledged in return for a pledge to stop NATO’s expansion. After the breakdown of talks in 1994, further tensions in 2004, and a coup in Kyiv, unfavourable to its interests, Russia seized the Crimean Peninsula in 2014, after denouncing the lease to Ukraine.

…but let it happen

The international community was duly alarmed by these events but did little to stop them, only agreements signed in the Normandy format (without the US and the UK) and a sanctions regime. By then however, the EU was not too concerned about the stalling of the process and President Trump, who was not interested in NATO, took little notice of the tensions around Ukraine. His successor, Joe Biden, a veteran of the Cold War, brutally brought it to boiling point once again in 2021, to make his allies forget the evacuation from Afghanistan without consultation. To restore his leadership, he did not hesitate to challenge Russia and remobilise NATO.

History will no doubt identify as an aggravating or even triggering factor the intransigent strategic partnership signed on 10th November 2021 between President Biden and the Ukrainian Minister of Foreign Affairs in the midst of a round of Russian-American strategic negotiations opened in Geneva in June 20212: it was stated therein that the two signatories had no intention of applying the 2015 Minsk agreements, even though they had been endorsed by the UN. And it will be noted that a month later, President Putin ostensibly convened his extended Council and announced that “we simply can no longer back down, that is the whole question”. The Kremlin and the Ministry of Foreign Affairs (MID), which has a very long strategic memory, undoubtedly at that point started planning a global operation, with several options, to neutralise Ukraine.

Are we dealing here with a very serious family dispute, a tragic intra-state conflict linked to the last gasp of de-sovietisation in the region that started in the mid-1990s? If so, it can be solved, despite the extent of death and destruction that will require reparations and criminal proceedings. It will then follow that the measures to stiffen NATO’s spine and the massive rearmament of Europe to protect the Euro-Atlantic world from a new cold war will remain once-off emergency measures, a rhetorical precaution without long-term significance, a simple collective reflex. And we shall hopefully be able eventually to reunite Europe from the Atlantic to the Urals (ATTU), even if a continental heartland associating Germany and Russia remains a nightmare for the distant maritime powers, Great Britain and the United States, according to Mackinder’s thesis (1904, 1943). The current war will however disqualify the leaders in the Kremlin who have committed an irreparable political blunder, even if it can be explained by the botched dislocation of the Soviet empire and subsequently that of Yugoslavia in the 1990s. But once the 190 million Russians, Ukrainians and Belarusians can live side by side in Eastern Europe, reunification can take place.

Or alternatively, are we looking at a Kremlin-led strategic and military offensive to consolidate a West facing wall around Russia and rebuild a frontier around Transnistria, Ukraine and Belarus to isolate the southern flank of Russia from NATO countries? It was this alarmist analysis that prevailed from the outset in Europe. And in this reading, Ukraine is just a convenient pretext for Moscow to settle its scores with the United States for the casual way it ended the Cold War, eager as it was to turn its attention to its rivalry with Beijing, its real competitor. Or is it rather the tsarist dream of a potentate rewriting history and a desire to repair a Western assault on a great imperial civilisation which has conquered major regions of Eurasia?  The United States does not hesitate to see it as the return of the Red Army’s radical challenge to the free world in 1945 and denounces an evil regime which threatens Central Europe and must be destroyed at all costs.

From a French point of view, we would prefer to see the first alternative prevail. In this way, the still necessary reunification (ATTU) of Europe could be prepared, the only appropriate way of establishing a real European centre of gravity that the EU is struggling to embody. But today the European continent is held hostage by the American-Chinese rivalry and a residual American-Russian tension, while Moscow is striving to restore its viability on the world stage.

Is the war in Ukraine the last tragic jolt of half a century of a cold war that ended badly in the 1990s? Or is it the first manifestation of a strategic reordering which will bring the centuries old supremacy of the Western world to an end but will perhaps allow the emergence of the European continent as an autonomous player in a multipolar world? In which case, the question of the “East of the West” will no longer be relevant3.

is a French Admiral (ret.) and cofounder, with Olivier Kempf, of “Vigie, synthèse stratégique” in 2014. He holds a doctorate in political science and is a former commander a.o. of the attack submarine Ouessant. Admiral Dufourcq also served at the Centre for Analysis and Forecasting of the French Ministry of Foreign Affairs in Paris, at the Permanent Representation of France to the EU in Brussels and at the NATO Defense College in Rome. From 2007-2012, he was director of studies at the École Militaire in Paris (Irsem) and from 2009-2014 he served as editor-in-chief of Revue Défense Nationale. Since 2010, he has been an associate member of the Royal Swedish Academy of War Sciences.