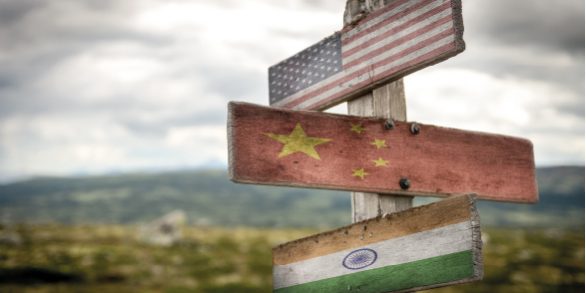 Qualitative improvements in China’s nuclear forces are a result of its nuclear doctrine of ‘no first use’, coupled with a posture of ‘limited deterrence.’ The Russia-Ukraine war poses new security challenges to the global order making nuclear deterrence most vulnerable.
In 1962, during the Cuban Missile Crisis, China took advantage of the international crisis that took two superpowers to the verge of nuclear brinkmanship. One of the major causes of the 1962 Indo-Chinese war was China’s confidence that the two superpowers, embroiled in a global crisis with potentially cataclysmic consequences, would not interfere.

India’s neutral stance towards Moscow
India will therefore take developments in Ukraine very seriously and plan its defence modernisation programme accordingly. Missile defence modernisation will be an important step for India’s forces, which received their initial delivery of the Russian S-400 air and missile defence system in December 2021. Western countries have criticised New Delhi for maintaining a neutral stance on the Russia-Ukraine war, but India has always been clear that it is unwilling to follow any sanctions other than those imposed by the United Nations.
India observes that countries like Japan and Taiwan are also modernising their offensive and defensive capabilities. In 2022, Japan aspires to develop counter-strike capabilities. Its missile defence system together with its advanced radar, like the ‘Aegis missile defence’, will be a concern for China as such radars will be capable of tracking China’s long range missile systems. Taiwan too is developing missiles that can reportedly attack enemy air bases and bring down cruise missiles.

Tussle for power in the Indo-Pacific region
All these developments increase the scope for a power struggle in the Indo-Pacific region. This, coupled with the US Theatre Missile Defence (TMD), is major concern for China, which has time and again raised concerns over the US TMD, justifying its annoyance on the grounds that TMD jeopardises nuclear deterrence in the region. Unsurprisingly, China is therefore making efforts to modernise its nuclear forces to evade enemy defence systems, thereby enhancing the possibility of inflicting unacceptable damage on adversaries.
In November 2021, the Pentagon reported that China “aims to modernise, diversify and expand its nuclear forces” in the next decade and further noted that China is “investing in, and expanding, the number of its land, sea and air-based nuclear delivery platforms and constructing the infrastructure necessary to support this major expansion of its nuclear forces.” Thus, the modernisation of China’s nuclear forces to counter US ‘defence by denial’ is worth analysing, especially as it is a major component of China’s ‘Assassin’s Mace Strategy.’
The same Pentagon report suggests that China, despite its ‘limited deterrence’ policy, could increase its nuclear warheads to one thousand in the next decade.
It could also focus on building a robust nuclear triad to strengthen its posture of ‘limited deterrence’, build missile silos for greater survivability of land-based liquid fuelled missiles, modernise road and rail mobile missiles, modernise nuclear delivery aerial platforms and equip them with cruise missiles for greater stand-off capability and focus on a robust sea-based nuclear delivery platform with greater command and control efficacy.

China’s nuclear forces counter-measures
India is observing with attention China’s nuclear forces counter-measures against enemy missile defence systems. These include multiple independently targetable re-entry vehicles (MIRVs) on land and submarine based ballistic missiles, manoeuvring re-entry vehicles (MaRVs), lasers to blind US surveillance and tracking systems, hypersonic glide vehicles (HGVs) mounted atop ballistic missiles like the DF-17, dual capable missiles being deployed to confuse adversaries, and construction of dummy silos for liquid fuelled missiles. In addition, China is developing a Fractional Orbital Bombardment System on its nuclear capable HGVs that will enhance its ability to inflict greater damage on adversaries.
India is also aware of China’s use of decoys and the fielding of liquid fuelled DF-5 ICBMs for greater thrust, range and payload capacity, despite the ‘use them or lose them’ dilemma of these missiles.
China has also built a new hot air balloon base in the north-eastern port of city of Dalian as a component of an early warning missile attack system to monitor the Korean Peninsula and US military installations. Missile detection systems can reportedly be deployed on helium filled balloons such as those reported to be located near the Spratly archipelago.

Towards a deterrence by punishment strategy?
All these efforts are being made to increase the robustness and survivability of China’s nuclear forces, making it possible to put in place a ‘deterrence by punishment’ strategy. On a positive note, these developments would enable China to strengthen its ‘no-first use’ doctrine. However, as they can also enable its forces to nullify adversaries’ missile defence systems, they might result in China being less fearful about maintaining stability in regions where its ‘no first use’ doctrine does not apply. This is the strategic challenge in the Indo-Pacific region.

How to successfully prosecute CBRN crimes – from the crime scene to the courtroom
26. August 2022