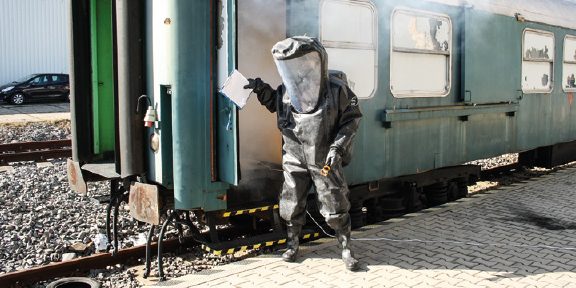 The development of a series of CBRN Guides is funded by the European Union (EU) Chemical, Biological, Radiological and Nuclear (CBRN) Risk Mitigation Centres of Excellence (CoE) Initiative. This activity is coordinated by the United Nations Interregional Crime and Justice Research Institute (UNICRI) in close cooperation with relevant international organisations and partners.

Killing or harming is rather cheap
Committing a murder through deliberate use of chemical and biological agents is much cheaper than killing someone with a radiological or nuclear material. According to the CBRN experts, it ranges from $1 to $1000 to kill someone with a biological or chemical weapon respectively. However, building up the CBRN forensics and investigative capabilities in any country, including prosecution and eventual indictment in court, requires considerable financial resources and substantial efforts from governments, especially from law enforcement authorities.
In order to enhance and strengthen the CBRN forensics capabilities of its partner countries, the EU CBRN Centres of Excellence Initiative successfully implemented two projects addressing crime scene forensics investigators of CBRN incidents:
Project 57 “Strengthening crime scene forensics capabilities in investigating CBRN incidents in the South East and Eastern Europe (SEEE) Region”.
Project 58 “CBRN Forensics equipment for the SEEE Region”.
The beneficiaries involved in forensic investigation of CBRN incidents, mainly consisting of police, investigators and forensics experts, requested that additional international guidance documents be produced, developed with relevant CBRN subject matter experts with a focus on the CBRN crime scene and from the crime scene to the courtroom.

Managing the CBRN crime scene
The deliberate use of chemical and biological agents is not always related to killing or physically harming someone, but instead may lead to negative consequences in terms of environmental contamination and pollution. Illicit trafficking and dumping of chemical waste and other hazardous and dangerous toxic materials have now changed the traditional crime scene which has expanded to encompass the nature and specific environments.
The investigative process and the subsequent prosecution are becoming even more challenging, especially if the crime scene is contaminated with CBRN materials. Forensics experts need to treat the CBRN crime scene with additional precautionary measures by respecting all relevant procedures in order to operate safely in the contaminated environment while preserving the evidence intact. Standard Operating Procedures (SOP) and different national rules, policies and regulations help the forensics and law enforcement officers to properly carry out their duties in a CBRN contaminated environment.
Therefore, complementary guidance tools in the field of crime scene management were issued by relevant international organisations. For example, the International Atomic Energy Agency (IAEA)’s Nuclear Security Series No. 22G, Implementing Guidance on Radiological Crime Scene Management, outlines the process used to ensure safe, secure, effective and efficient operations at a crime scene contaminated with nuclear or other radioactive materials. This document was developed by IAEA and jointly sponsored by UNICRI and INTERPOL.
A similar handbook, a guide on chemical and biological crime scene management will be developed by UNICRI in close cooperation with relevant international organisations such as the Organisation for the Prohibition of Chemical Weapons (OPCW) and other regional entities, including law enforcement organisations.

From the crime scene to the court room
As a complementary effort to guide prosecutors, investigators and judges, it was recommended that a prosecutor’s guide to CBRN crimes be developed.
The first substantial result to fill this gap was the publication of the Prosecutor’s Guide to Chemical and Biological Crimes in May 2022. The Guide was developed by UNICRI in close cooperation with the Oranisation for the Prohibition of Chemical Weapons (OPCW) and the International Association of Prosecutors. It includes high-level insights, theoretical and practical considerations and case examples related to the deliberate use or misuse of chemical and biological agents and toxins.
The Guide provides a basic overview of chemical and biological agents, their transmissibility, interactions and impact, transportation methods, equipment and security measures, and the challenges of coordinating a response considering rapid technological advancements and dual-use challenges.
One of the strengths of the Guide are the real-life case examples it includes to demonstrate the importance of multi-agency cooperation, intelligence and information sharing. The outline of the cases summary, key points of evidence, prosecutorial priorities, primary investigative focus, investigative intelligence, challenges encountered, and outcomes of those cases represent a useful reference for prosecutors.
Important components of the Guide are a detailed discussion on the key elements of a chemical and biological crime, providing insight into the type of triggers and indicators, evidence and intelligence that may be acquired along each stage.

Building a CBRN case for prosecution
The ultimate success in the prosecution of criminal cases depends on how relevant investigative and law enforcement authorities construct all relevant facts and present them intact to the court. For this particular purpose, the Guide represents a valuable summary of key components to building a successful case for prosecution including investigative avenues, evidence preservation and integrity, and the importance of case reviews as key elements of a success strategy.
The technological advancements that offer innovative options during the investigative process yet require a thorough understanding of their limitations and a legal standing. An outline of the investigative types of technology in use for crime scene teams is presented. The Guide also contains a basic description to differentiate the role of prosecutors in the civil and common law systems.
In some instances, in order to complete the entire process of constructing the case for prosecution, investigators and law enforcement officers require assistance from other countries and international organisations. An easily accessible list of relevant international conventions with the provision of summary tables providing short summaries of international organisations and supporting agencies is part of the Guide.
The Guide is completed with an extensive glossary developed by the European Union’s Joint Research Centre, that compiles useful and relevant terms often encountered during the investigation and prosecution of chemical and biological crimes.

Implementation and integration
A series of action-oriented guidance manuals is not meant to be produced only to end up on the user’s library or bookshelf. The ultimate objective is to integrate them in the standard toolkit of prosecutors and investigators in the performance of their professional duties. Based on the content, a series of curricula will be developed by UNICRI that will provide training for a targeted audience of prosecutors and investigators from law enforcement agencies including practical workshops. E-learning modules and educational videos will complement the Guide, providing a deeper understanding of the theoretical components.

Disclaimer: The opinions, findings, conclusions and recommendations expressed herein do not necessarily reflect the views and positions of the United Nations and UNICRI, or any other national, regional or international entity involved.