European enlargement, security and defence on the rise 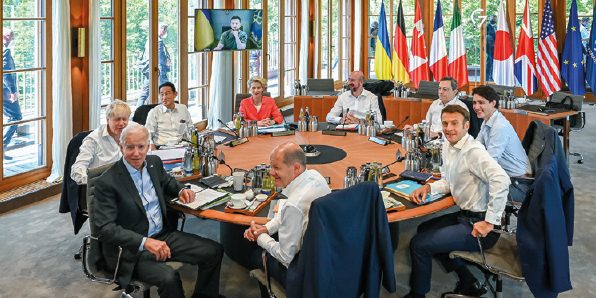 The Russian war of aggression against Ukraine and the grave and wholesale violations of human rights and international law have made it all the more urgent for the EU to respond to new geopolitical dynamics. The historic decisions taken at the European Council on 23th-24th June and the NATO summit in Madrid a week later will profoundly shape the future of Europe.
The G7 meeting in Elmau has also underlined the determination of western allies to maintain the strongest possible unity of the international community in condemning the Russian Federation, defending international law and upholding the rules-based international order. Ahead of the G20 meeting in Bali on 15th-16th November, we must step up our diplomatic efforts to convince as many countries as possible to align with the sanctions against Russia. The pressure on the Putin regime must be ramped up.

Striving for the EU’s strategic sovereignty
The Kremlin has not yet achieved any of the goals it set out to achieve. Instead, Putin’s war has made NATO more united than it has been for a long time. Not only that, the transatlantic alliance has been bolstered further. In a changed geopolitical environment, NATO members signed the accession protocols for Finland and Sweden on 5th July. I for one strongly welcome the fact that all of our allies have finally recognised that having these two Scandinavian countries in NATO will increase security in Europe.
All over our continent, security and defence policy is gaining enormous importance. Germany will gradually increase its defence budget to match NATO’s 2% target and has launched a special fund of €100bn for its armed forces, the Bundeswehr. The people of Denmark have voted in a referendum to join the EU’s Common Foreign and Security Policy (CFSP). These two examples demonstrate the far-reaching changes that have taken place in a very short period of time.
The European Commission should seize this momentum and quickly take all the necessary steps to ensure the strategic sovereignty of the EU and pursue a genuine security and defence policy in close cooperation with NATO. Adopting the Strategic Compass for the EU on 21th March 2022 was a key milestone, as it provides the Union with a clear roadmap for our security and defence activities for the years to come. This compass is intended to serve as the EU’s first ever White Book on European defence, and I now call for its swift implementation. It must meet the highest level of ambition and priorities to develop the capabilities needed to tackle the serious deterioration in the European and international security order. We need to set out clear guidance with a realistic timetable for action across the security and defence fields in order to make the European Union a stronger and more capable security provider.

Reassessing the EU neighbourhood policy
At the same time, the European enlargement policy must become more predictable, coherent and credible. Granting Ukraine and the Republic of Moldova EU candidate status has sent a clear political message that those countries have irrevocably chosen a European path. Georgia could be on track for the same status if it fulfils a number of requirements. Meanwhile, the six Western Balkan countries deserve a clearer EU prospect. I am therefore calling for the entire European neighbourhood policy to be reassessed. The Commission should thoroughly examine the impact of Russia’s war against Ukraine on cooperation with all countries that aspire to join the EU. The current situation requires us to strengthen our ties with these countries. This means ramping up sectoral cooperation, for example on the single market or on security. Enhancing reforms on democracy, human rights and the rule of law remains crucial.

The Western Balkans
The Commission and the Council should make full use of the revamped methodology to improve the credibility, transparency and accountability of the accession process. They have the tools available to do this. Metrics can be used to assess the performance of justice systems, while a lack of political will can be addressed with conditionality. The EU must live up to its commitments at a political level. The start of the accession negotiations with Albania and North Macedonia are a crucial step. We must also move forwards with granting visa liberalisation to Kosovo without further delay. Montenegro – often called the frontrunner – needs to make progress in meeting its benchmarks and closing negotiation chapters. In Bosnia and Herzegovina, the political leaders should return to the state institutions and press ahead with the EU-related reforms to demonstrate its EU perspective. And Serbia, as a candidate country, must show real commitment to EU values and align with the EU’s decisions and positions on foreign and security policy. There is no one-size-fits-all solution. Each country has to be assessed individually and on its merits.

The southern neighbourhood
In our southern neighbourhood, the accession process with Turkey will remain at a standstill while there is no clear and significant progress on fundamental rights and the rule of law. Nonetheless, the Commission should work to enhance dialogue and cooperation with Ankara on foreign policy and security issues in order to strive for closer mutual alignment in these areas, and should remain open to engagement with Turkish civil society.
Furthermore, the EU should support the countries in the southern neighbourhood to help them recover from the Covid-19 pandemic and cushion the adverse effects of supply shocks and price increases following the war in Ukraine. It is regrettable that more than 25 years on since the start of the Barcelona Process, there is still some way to go if we are to achieve an area of shared prosperity, democracy, stability and freedom with the Mediterranean countries in the southern neighbourhood. It is essential that the initiatives outlined in the joint communication on the renewed partnership with the southern neighbourhood are implemented. This means taking all the necessary steps to facilitate Tunisia’s return to democracy, including technical support for inclusive and transparent efforts to make political and economic reforms, as well as engaging in talks with the two rival Libyan governments to resolve the political stalemate.

The EU must become a stronger security provider
In rising to the challenges of these geopolitical changes, the EU must become a stronger and more capable security provider for the good of its citizens and for international security, peace and stability. This triptych of values must guide our actions. All the EU institutions must work together to enhance the European neighbourhood and enlargement, security and defence policies.

“We need to set out clear guidance with a realistic timetable for action across the security and defence fields in order to make the European Union a stronger and more capable security provider.”