Strategic leadership in the European Union 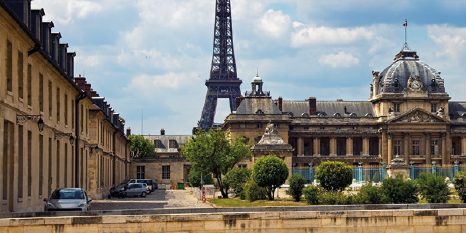 Under the patronage of the French EU Presidency, a two-day conference was held at the Ecole Militaire in Paris on 9th and 10th June 2022, bringing together directors of military education institutions and commanders of schools offering general staff courses from 23 EU Member States.
Under the leadership of the Director of the Ecole de Guerre, Major General (AF) Jean-Marc Vigilant, the issue of “strategic leadership” was the main topic of the conference in all speeches, round tables and plenary discussions. The key question was: how can the EU educate future military leaders to enable them to command multinational forces or take on the highest staff responsibilities in the EU and NATO?
The joint reflections on the future of a European higher military education were overshadowed by the war in Ukraine and the fact that the global environment has changed as the return of strategic and power competition has serious consequences on European forces’ capabilities to achieve the Union’s objective of a certain degree of strategic military autonomy. To reach this objective on the personnel side, officers in senior military staff positions must be prepared to follow a new strategy and develop a common strategic culture. This will not be achievable in their offices but only by living, working and reflecting together.
Day 1: Europe in a changing strategic context
The first day of the symposium was dedicated to reflections on the current geopolitical situation, with an introduction of the defence issues by Lieutenant General Luc de Rancourt de Mimerand from the French Ministry of Defence and Jonathan Lacôte, Deputy Director General of Political and Security Affairs of the French Foreign Ministry. Both came to the conclusion that NATO will remain the cornerstone of Euro-Atlantic security and the crucible of interoperability between allied partners. The EU should become a strong and credible partner for the alliance to be able to share burdens within NATO.
A panel with high ranking civil and military personalities discussed the EU Strategic Compass as a leading concept for common European efforts but underscored once again members’ ongoing need for American protection. Frédéric Mauro, lawyer at the Brussels bar, summed up: “The strategic compass is a useful document both at the level of symbols and concrete measures, because it marks Europeans’ awareness of the need to defend themselves”. The panel was united in the conviction that investing in future generations of political and military leaders with a European education is of the utmost importance.
The practical side was represented by Vice Admiral (FR) Hervé Bléjean, Director General of the European Military Staff in Brussels and Major General Hermino Maio, (POR-A), Deputy Director, Military Planning and Conduct Capability in the European External Action Service (EEAS). They addressed military operations, missions and objectives of EU training missions and both expressed satisfaction with their experience of operational multinational contingents and emphasised the importance of training and cultural preparation for each mission.
Colonel Georgio Kapoglannis, (HEL-A), the military training manager of the European Security and Defence College (ESDC), argued along the same lines. Dr Thierry Tardy, Head of the Research Division of the NATO Defense College, showed how fruitful the staff course in Rome is for the development of a common attitude among senior NATO civil and military leaders.

Day 2: How to create a European strategic culture
The second day focused on the modalities and the legacy of senior officers training in the Member States. It was introduced by Lieutenant General Benoît Durieux, (FRA-A), Director of Higher Military Education, analysing what military leaders can expect in modern warfare and how they must be prepared for new phenomena in combat.
He started by saying that war consists of the reciprocal use of physical violence to impose one’s will on the adversary and that it is a terrible ordeal for people and societies who are confronted with this experience. “It immerses military leaders in an environment dominated by fear, suffering, tension and uncertainty”, he said and added: “the new fields of conflict like space, cyber or the striving for information superiority will not spare military leader the test of physical violence, but they will contribute to making the environment even more chaotic”.
On two panels, the commanders of General Staff Courses institutions presented their syllabuses, all of which include European security and defence aspects. Major General Vigilant noted: “I am convinced that our diversity is also our strength”, and added: “but I also see the drawbacks of not having a common general staff education for Member States’ senior General Staff officers”. He insisted that these future leaders must be able to interact rapidly, have a profound knowledge of Europe and its societies and respect their – often common – history and cultural ties.

Conclusion
The French Chief of Defence (CHOD), General Thierry Burkhard, concluded the conference by expressing satisfaction that there is unanimous agreement on France’s proposal to launch an EU higher military education: “The EU’s ambition of exercising its sovereignty in changing times needs civil and military capabilities in all Member States adapted to that need. But there is also an urgent need for an EU strategic culture in practice, allowing future military leaders to get to know and understand each other better. This is valid for the EU and NATO” and he added “to oppose the EU and the US is sterile. We are partners in the same system, but we must acquire capabilities to be able to defend our interests by our own means, if necessary”.

Questions to Major General Jean-Marc Vigilant
The European: General, at the end of the conference, in a closed meeting with your counterparts, you defined the way ahead: What can our readers expect?
Jean-Marc Vigilant: Overall, the French initiative met with a unanimously positive response. We managed to achieve initial results and chart a path forward. A working group will be set up, which will first take stock of objectives, set milestones, and develop proposals for modular training and clearing obstacles that could block the process.

The European: Congratulations, General! Which Member State will be leading the working group you mentioned? Do you have an idea of the objectives?
Jean-Marc Vigilant: Firstly, the working group is a ‘club of members’ with equal rights. They will find the optimal solution. France initiated the process, does not claim leadership but is willing to assume such a role to keep up the momentum.
Secondly, on the objectives, we are all convinced that such an education process needs to be all encompassing, taking into account global challenges, capability development including industrial and economic aspects and operational planning. Current conflicts in the world and especially in and around Europe make this education in a European framework even more relevant.

The European: Is there any idea where this course should take place and when do you think the EU will take its decision?
Jean-Marc Vigilant: So far, the directors have agreed on the development of a short common European education module to be implemented in the different European command and staff colleges and on the principle of a more substantial programme under the auspices of the European Security and Defence College. For the time being, everything is open. It will be up to the Member States to decide on the scope and form of this future common European education and training programme. We have thrown a stone into the water and the waves are moving. I am very optimistic about the future of this project.
The European: General, may I thank you for a most fruitful conference. Our magazine supports your efforts to create a strategic culture through common education.