Has the time for EU power come? 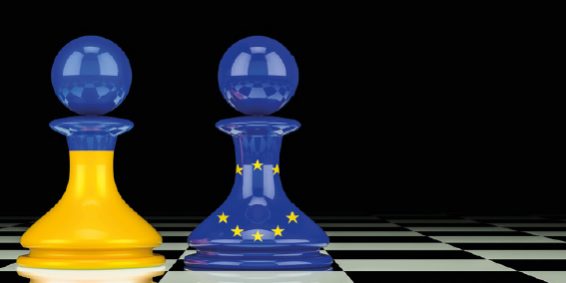 The military invasion of Ukraine by the Russian Federation has forced Europeans to take a new step in asserting a more ambitious international posture, which should anchor the notion of European strategic autonomy in the medium term. The Ukrainian war raises the question of the European Union’s power, which requires a look back at the dialectical relationship between the Union and power since the beginning of the European integration process, and to evaluate how the current situation renews this dialectic.

The European peace project in jeopardy
European leaders have for many decades tended to define European integration as an influence-without-power, peace project. However, a peace project can be confronted with an international environment that is not peaceful, as the war in Ukraine currently shows. Thus the European Union (EU) has gradually developed a strategic discourse over the last two decades, aiming to position itself on the international security scene and tackling hybrid threats: a European Security Strategy in 2003; a Cyber Security Strategy in 2013 followed by a cyber toolbox and the possibility of imposing sanctions in the event of cyber-attacks (2018-2019); a Comprehensive EU Security Strategy in June 2016, and a Strategic Compass in March 2022. This evolution has been backed up at the operational level by the development of peace operations (in sub-Saharan Africa and the Balkans in particular), naval operations to combat piracy, etc. These developments started to move the EU towards something other than civil and normative power.

What power attributes for the Union?
The EU can draw upon important resources such as a large and prosperous internal market, strong trade and attractiveness, which help to set regulatory standards in these areas. For some, this is a key lever of EU power. However, it is important to look further and assess how far the EU has come in its ability to impose its views not only through civil and normative means, but also through military means in case of conflict. What is at stake today is the EU’s ability to make optimal use of its traditional tools of power, while at the same time adding to them a posture and tools that have eluded it until now. If the EU wants to build on its undisputed soft power and combine it with hard power to achieve a form of smart power, it has several assets to develop.
Military capabilities are an important first step in moving from vision to action. On paper, the EU has developed military capabilities over the last two decades. The Strategic Compass approved by the European Council in March 2022 even foresees a rapid reaction capability of 5,000 troops by 2025, which could replace the European Battlegroups never deployed. Yet there is still a significant gap between capabilities and action. However, the EU has already deployed nearly ten military operations on different continents over the past two decades, which add to the civil missions also undertaken within the CFSP and CSDP framework.
The second challenge that the EU has begun to address is the issue of its cyber power. In an increasingly connected world where cyberspace has become the fifth battlefield, the EU published a cybersecurity strategy in 2013, updated in 2020, and created an institutional architecture for cybersecurity. The EU recently (in May 2022) denounced Russian cyber-operations in Ukraine.
The third is the full use of the classic attributes of European civil power, such as economics, norms, etc. The EU’s traditional use of international sanctions for pressure or unarmed international action shows that the EU is capable of a coercive use of its civil power, which could be seen as a strategic oxymoron. Sanctions indeed offer a good indicator of the fluctuations of the EU’s relationship to power.
These assets give the EU valuable power resources, but they are not always put to their best use.

Can the EU become powerful at last?
The current situation between Russia and Ukraine has highlighted the recurring limitations that have so far plagued the notion of power at the European level.
Since 2014, the EU has mixed mediation attempts with sanctions against Russia. The ambiguity of the relationship between the EU and Russia is based on the recurrent divergence of positions between Europeans on the subject of Russia. It was only the escalation of violence on the Russian side in February 2022 that finally gave impetus to collective European action. And yet in June 2022, France and Germany’s prudent attitudes towards Russia tended to provoke important misunderstandings with many other EU Member States, among which Poland or the Baltic States for instance. If faced with a very assertive power, the EU struggles to find harmony, it may be even more difficult with more subtle power-seekers. If the shock of the military invasion of Ukraine makes it difficult to envisage a “return to the past”, the length of the conflict starts reinvigorating divergences between EU Member States on how to deal with Russia in the future.

Need for a long-lasting common perception
In the end, what is still largely lacking is a long-lasting common perception of European interests among Member States and a consistent EU foreign policy. The war in Ukraine is putting sudden and unprecedented pressure on Europeans to finally take up the issue. But the durability of this European harmonised response will depend very much on the political will of its Member States once the fog of war will start fading, and on whether or not the convergences observed in the early days of the Russian-Ukrainian conflict are confirmed.
We also need to bear in mind another dimension, linked to the internal politics of European states, which may have a limiting impact on the EU’s power. This is the rise of illiberal regimes within the EU. Once again, it took a very high threshold of violence in Ukraine for Hungary to finally disassociate itself from Russia. The reason the EU could be seen as a champion of democracy in Europe in the 2000s, in the wake of the end of the Cold War and the enlargement to central and eastern Europe, was that the Member States shared a common perception of democracy. It is to this community of values that the Ukrainian claim for possible EU membership appeals. In this respect, if the governments of the Member States start to develop different visions of democracy and its functioning, this may affect the EU’s foreign policy, which is based on the presuppositions of liberal democracy and which is now being challenged by Russia in its armed conflict with Ukraine. If the war in Ukraine has started a ‘pause’ in intra-European tensions on that matter thanks to the important role played by Poland in relation to Ukraine, and a tempered pro-Russian stance on the part of Hungary in the face of the emotion generated by the military invasion of Ukraine, the continuation of this pause, which facilitates European unity, is uncertain.
However, as the “time of Europe” and the European “strategic awakening” have already been announced on numerous occasions since the end of the Cold War, caution is called for with regard to statements announcing the birth of a European power in the context of the Ukrainian conflict. Only the evolution of European policies and commitments in the post-Ukrainian war period will allow, or not, a change in European posture.

A more substantive version of this article has originally been published in French on ­
8th April 2022: https://bit.ly/3O2qHAi