How to realise EU enlargement with the Balkans and Ukraine 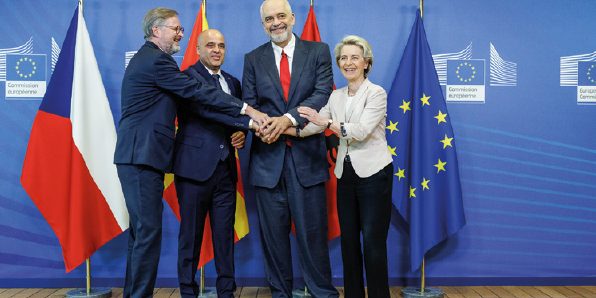 The European: Gerald Knaus, we meet at a historic moment for the European project, following Russia’s invasion of Ukraine. You have worked on EU enlargement for decades, proposing ideas, from promoting visa-free travel for the Balkans and Moldova to including countries in the European Single Market. Now, on 17th June, the European Commission offered candidate status to Ukraine and Moldova and a membership perspective to Georgia. On 23rd June, EU and Western Balkan leaders met to discuss EU integration. On 24th June, the European Council granted Ukraine and Moldova candidate status. In mid-July, Albania and North Macedonia began accession negotiations in Brussels. Are things moving in the right direction?
Gerald Knaus: I wish they were. It was very important to grant candidate status to Ukraine and Moldova. Not doing so would have sent a terrible message of EU indifference to Kyiv and Moscow. It was also high time to start accession talks with Albania and North Macedonia. But look closer, and you see that the key question, how to strengthen European democracies which are not yet members of the EU through integration, has not been addressed. Much of what we see resembles the villages Grigory Potemkin created for his mistress, the Russian Czar, on her trip to Ukraine: facades, with nothing behind them.

The European: This is harsh. Do you indeed suggest that the EU’s response to Ukraine and Moldova is not embedded in a strategic vision, but is only an ad-hoc response? And that opening accession talks with Albania and North Macedonia is not enough to revive the Balkan enlargement process?
Gerald Knaus: Tough times call for realism, not wishful thinking. Realists know that some EU countries agreed to offer Ukraine candidate status because they only see it as a symbol. They do not see Ukraine as a member of the EU. And the accession process with all six Balkan countries suffers from a similar, fatal flaw: it is not leading to any new members joining, now or in the future, because there is no agreement within the EU on admitting new members. We see that the accession process is a holding operation, feeding cynicism. We need something more realistic.

The European: What is the essence of your “we need something more realistic”? What is the ESI proposal on the way forward that you published some weeks ago?
Gerald Knaus: The EU has a vital interest in the stability and transformation of these democracies. Accession is the right vision for this. But in the short term it suffers from a fatal flaw: it is not supported by leaders and public opinion across the EU. The French president is open on this. In his view, the EU cannot accept many new members without deep internal reform.
The European: But what should happen until such a reform takes place, if ever?
Gerald Knaus: We suggest returning to the vision of The Treaty of Rome in 1957, that created the European Economic Community, of “removing barriers” among European democracies. And to offer all democracies access to the single market and to the four freedoms: freedom of movement for goods, people, services and capital – if they meet the necessary criteria, including respect for human rights and the rule of law.

The European: What would this allow?
Gerald Knaus: This would allow Ukraine, Albania and North Macedonia to soon enjoy the same rights that citizens of Norway, Iceland and Northern Ireland enjoy. It creates an incentive for deep reforms to get there. And it is also politically realistic within the EU.

The European: This offer should be made to whom? Which will be the way ahead?
Gerald Knaus: We have an ongoing accession process in which countries move from being candidates to opening and closing 35 chapters. We also have in-depth assessments of how prepared countries are to join the EU, produced annually by the European Commission. Based on these, the EU can hold out an attractive interim goal of access to the four freedoms once countries are found to be prepared. This is based on merit. It does not first require EU internal reform.

The European: Are you suggesting that the instruments to achieve these ends already exist?
Gerald Knaus: Yes. Every year the European Commission already publishes reports on how far each Western Balkan candidate has progressed in meeting EU standards and requirements for the single market – from environmental to competition policy – and on the rule of law. It should do the same for Ukraine and Moldova.

The European: What happens when the Commission finds that countries are well prepared to meet the conditions of joining the single market?
Gerald Knaus: The Council could declare now that once the Commission confirms that a candidate has met these conditions, it would gain access to the four freedoms. The EU has already done this in smaller sectors, for example in the EU-Western Balkans Transport Community Treaty of 2017. It could propose a treaty to extend this to all areas of the single market. This is better than the status quo for both candidates and the EU. It is win-win.

The European: In your above-mentioned ESI paper, you write that this could be a second Treaty of Rome…
Gerald Knaus: …yes, it could set up a second European Economic Community (EECII). What matters is the substance. The four freedoms matter to people. They matter to investors. Northern Ireland benefits a lot from remaining in the single market. So does Norway, which pays for this access. It would help countries catch up economically, as the Baltic States or Poland have done. It allows for borders to become invisible, as on the island of Ireland or between Germany and Poland.

The European: You further wrote in this recent ESI report that “Turning bold visions into concrete technical steps has been the secret behind European integration. It was realist politicians like Robert Schuman and Konrad Adenauer, inspired by strategists like Jean Monnet, who turned lofty language about a European family into solid institutions”. However, in 1957 there were only six nations who needed to agree. And there was peace in Europe. Today we face a war in Ukraine. Is this not a big difference?
Gerald Knaus: This makes it more urgent. In fact, when the first Treaty of Rome was negotiated in 1957, there was not only the Cold War but also a bitter and bloody war being waged by France in what was then French Algeria. The battle of Algiers took place at the very time the Treaty of Rome was being negotiated. But the European Economic Community which was created at that time lasted longer than both the French Fourth Republic and all the European colonial empires. It survived Franco’s and Salazar’s dictatorships, the Warsaw Pact and the Soviet Union. Its vision of a Europe where democracies remove barriers to be more prosperous and to make conflicts between members unthinkable worked beyond all expectations. In fact, it became so attractive that other democracies wanted to join. All Europeans owe a huge debt to Monnet, Adenauer, the Belgian leader Paul-Henri Spaak and all those who created it.

The European: What is the relationship between this, initially economic, European integration and the story of war and peace in Europe since then?
Gerald Knaus: Since the end of the Cold war in 1990, Europe has witnessed many armed conflicts. However, other than the Troubles in Northern Ireland, which ended in 1998, none took place in the European Union. In the past, Immanuel Kant and Victor Hugo had dreams of democratic peace across the continent. In Zurich in 1946, Winston Churchill spoke about integration on the Swiss model as key to the future of a peaceful European family. But it was Monnet and his generation of pragmatists who turned an abstract vision of European peace into a strategy of step-by-step integration. Removing barriers was key to this. Now the Europeans should build on this in the Balkans and with Ukraine. Then and now, deterrence was also needed, of course, today against an aggressive Russia. And Ukraine must be helped to win this war. A combination of deterrence and integration can consolidate European peace for the next generations.

The European: But is this not what the EU already hopes to achieve with the promise of accession to the Balkans?
Gerald Knaus: Yes. EU leaders took the step to open accession talks with 12 countries at their summit in Helsinki in December 1999 because of the shock of the war with Serbia. EU leaders should now respond to the shock of a major war in Ukraine with a similarly bold vision. For this, the promise of integration must be credible. Montenegro has been negotiating accession for more than ten years now. It has been a loyal NATO member for many years. The EU should now state that if Montenegro meets all the conditions, it could be a full EU member by 2026. In addition, the EU could guarantee as of now that its citizens would then enjoy the four freedoms. The same prospect should be held out now to Albanians, Kosovars, Bosnians and Serbs.

The European: The invitation to Ukraine and Moldova owes a lot to Russia’s attack. This created a sense of unity. But you suggest there is no common EU view on Ukrainian membership?
Gerald Knaus: On this, EU members remain divided. Poland, the Czech Republic and the Baltic states are urging the EU to be open to Ukraine. A second group stresses that the Balkans must be a priority. A third group, led by France, worry about rendering the EU dysfunctional by enlarging too much. EU policy must address all these concerns, not wish them away.

The European: How would the ESI proposal of a new European Economic Community address these divergent concerns?
Gerald Knaus: The EU should hold out the option of full membership to all European democracies who are interested. This applies to Ukraine and to the Balkans. But it should offer a two-step process, where countries can first integrate into the single market. This allows the EU more time to reform itself, without prolonging a frustrating process of talks designed to lead nowhere. The integration into the single market is good for all European democrats. The model of gradual and peaceful integration is a chance for each nation to achieve membership.

The European: Let me turn once more to the war in Ukraine, where we see a radically different political vision. Official Russia under Putin has long praised the foreign policy successes of its great 20th century Empire builder, Joseph Stalin, in movies, museums and history textbooks. The narrative of imperial reconquest has also recently inspired Putin to compare himself to Peter the Great, bringing Ukraine back into the empire.
Gerald Knaus: You are right, and this is a big difference: the European model of gradual, peaceful integration is the opposite of Putin’s imperial vision. It strengthens all countries without subordinating them to each other. Putin sees only one option, which is for Russia’s neighbours to “return” to the status of vassal states. If they are fortunate, they might end up like today’s Armenia. If they are less fortunate, they might look like the Belarus of Lukashenko. And if they resist imperial control, they will see their cities suffer the fate of Grozny or Mariupol. The EU offers a model of integration without creating a new imperial centre. This is another reason why Putin both fears and fails to understand the success of the EU.

The European: Thank you, Gerald Knaus, for this interview.