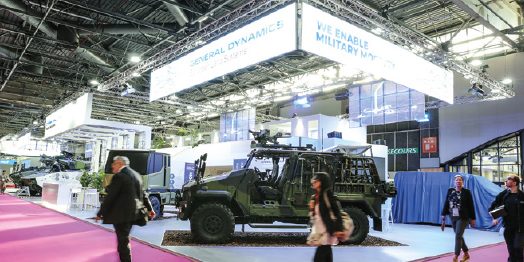 Military mobility was one of the issues that featured most prominently in the armament show at Eurosatory (Villepinte, France), the largest exhibition of land forces in Europe. Given the background of the war in Ukraine, the focus was on medium-sized armoured vehicles, wheeled or tracked and speed versus protective armour.

My visit to Eurosatory

What I was interested in above all was the future equipment of the German army that national and international experts have described over the last few years as run-down, due to budgetary restrictions. I was curious if there were any systems offered which could serve the German land forces, benefitting from the €100bn special fund the German government announced for the Bundeswehr to make it a significant player in European defence.

I visited several companies from Europe, Israel, the US and finally stopped at the  spacious and busy stand of General Dynamics European Land Systems (GDELS), a leading manufacturer of military wheeled and tracked vehicles and bridge systems in Europe, that has been focusing specifically on military mobility in Europe since 2016[1]. I met with the Managing Director for Germany, Dr Thomas Kaufmann and some of his top executives.

“Only the smooth and rapid deployment and manoeuvrability of mechanised land forces over the whole area of the Alliance can create the conditions and credibility for a successful and deterrence-oriented defence of our continent”, said Dr Kaufmann, as an introduction to our discussion. He added that
“it is the lack of rail, road and water transport capacity, ageing road tunnels and bridges with limited load capacity or headroom, the fragmentation of the enlarged operational theatre due to topographical obstacles of water or uneven terrain that has brought the subject of military mobility into sharp focus for the defence of our country and the Alliance.”

A sea change in strategic thinking

Speed is one of the decisive factors in the capacity to project land forces. Starting with the capacity to rapidly assess a potential threat, eliciting and implementing a speedy political and military response at all levels (NATO, EU, national) requires the capacity to appropriately project not only light forces but also to speedily deploy mechanised forces to any part of the Alliance’s territory under threat by a potential aggressor.  This means a sea change for European land forces, as they must be able to adapt their current capabilities and vehicle mix of their fighting units (wheeled, tracked and bridge) to the new
requirements, both in quantity and quality, according to Dr Kaufmann who explained that “the advantage of wheeled as opposed to tracked vehicles is that they can be deployed over long distances under their own power. This makes a big difference”. I learned that the medium sized vehicles in the German army, the number of which is planned to increase soon, is typified by the BOXER made by Rheinmetall/Krauss-­Maffei-Wegmann. It is also true of the next generation of vehicles designed to supersede the ageing FUCHS Armoured Personnel Carrier (APC) and thereby highlights the plausibility and relevance of this strategic sea change.  Dr Kaufmann emphasised “the importance of prio­ritising the roughly 800 APCs in the special Bun­deswehr budget so as to make a suitable next generation system available to troops in the near future”.

The requirements of European defence

Every development should be adapted to the requirements of European defence. Marc-Aurel Bischoff, responible for GDELS communication, pointed out that “very early on, GDELS focused its development work on this central requirement of European defence. All our vehicles and bridge systems have been upgraded or newly designed to fulfil the necessarycriteria” (see box below).

The GDELS experts consider that these trends spell the end of the road for the very heavy main battle tank that requires considerable logistic effort to be transported to the theatre, however effective its firepower, manoeuvrability over multiple terrains and heavy armour. “Highly mobile vehicle systems, equipped with the latest armoured technology, interoperable, more lightweight and therefore easier to transport are the future”, a senior engineer confided to me and, on my request, proceeded to show me some of these systems.

The PANDUR 6X6 EVO for example is a transport vehicle with which GDELS has equipped the Austrian army since 2018. It has exceptional mobility, high crew carrying capacity (3+8), a high level of mine (4a/3b) and ballistic (3+) protection, is versatile, including an amphibious option, and is easy to load onto a Hercules C-130.

The EAGLE 6×6 is another example of a future procurement option. With it, the Bundeswehr would be taking a further step towards a modern, versatile 6×6 wheeled vehicle platform with excellent mobility, armour and ease of loading. An added advantage is a high degree of logistics similarity with the EAGLE 4×4, of which the Bundeswehr already has a large number. Once all the certification testing is completed, the company expects the EAGLE 6×6 to enter service with the Bundeswehr in 2023.

Dr Kaufmann emphasised that, “in the light of the Russian aggression in Europe, there can be no compromises in the equipment and capacity of medium forces nor any delay in their delivery to the troops. Contrary to air or seaborn combat, land forces must combat in a multifaceted situation in conjunction with other weapon systems and therefore the characteristics and performance of each individual system and vehicle platform must be assessed within a comprehensive operational configuration”.

It became evident to me, that in order to be able to speedily deploy robust and survivable medium forces on the battlefield, modern platforms in their functional capacity, versatility, mobility and protection, must be measured against the BOXER. Restrictions and shortcomings in this area would compromise the success of medium forces which are essential for military mobility and the defence of Europe.

I came away from my visit to Eurosatory and the detailed discussion with GDELS with the feeling that if the Bundeswehr is to count once again among the best armies in Europe, it must rise to the important challenge of procuring the right equipment for its land forces.

[1]   One of the first comprehensive papers on this issue appeared in 2021, entitled: “The CEPA Military Mobility Project – Moving Mountains for Europe’s Defence” in cooperation with the transatlantic think-tank CEPA, led by Lieutenant General (ret.) Ben Hodges.