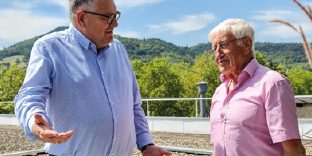 The European: Mr Kampmann, you have been the Managing Director of LITEF since 2019 after holding several executive positions in international companies. LITEF was founded in Germany more than 60 years ago and started by producing under licence and maintaining a navigation system. What are the key success drivers of LITEF?

Lutz Kampmann: LITEF was founded in 1961 as part of an offset agreement resulting from the sale of the F-104G Starfighter to Germany. Production under licence and maintenance of the Inertial Navigation System for the Starfighter were the main features of the offset agreement. Ten years later, in 1971, LITEF was awarded the development contract for the Tornado’s on-board computer. This was LITEF’s entry into computer technology and we still provide upgrades and maintenance. Another 20 years later, LITEF received orders for the development and production of the so-called IMU (Inertial Measurement Unit) as well as several on-board computers for the new Eurofighter programme.

The European: Was this participation in the Eurofighter programme the second breakthrough after the “Starfighter Story”?
Lutz Kampmann: To a certain extent yes, but there have been many other highlights in our now more than 60-year success story. We are constantly developing our products and remain true to our core competencies: acceleration and rotation rate sensors, inertial measurement units and attitude heading reference systems.

The European: Are these developments and products you mentioned subject to the American International Traffic in Arms Regulation (ITAR)?

Lutz Kampmann: These LITEF solutions are ITAR- free and are based on the further development of our MEMS (Micro-Electro-Mechanical Systems) and FOG (Fiber Optic Gyro) core technologies, redefining what is technologically feasible.

The European:  What technical and technological innovations led to LITEFs leadership in the market segment of inertial reference and navigation systems?

Lutz Kampmann: LITEF has been specialised in inertial navigation since the company was founded. Together with our customers, we develop inertial sensors and systems for various types of operations and applications, with high accuracy.

Milestones are the development and production of mission computers and IMU for military aviation. What we have learned from aviation, we have subsequently transferred to land systems as well as missile and torpedo applications.

Through the further development of FOG and MEMS technolo­gies, LITEF can offer inertial reference systems for aviation characterised by low weight, low volume and low power loss with high sensor data accuracy. These attitude heading reference and navigation systems offer excellent reliability and the capacity to provide “hybrid” position and location information with high bandwidth and low noise for navigation and flight control by means of the optimal combination of Global Navigation Satellite Systems (GNSS) receiver data and inertial sensors.

The European: What technical innovations for future systems are you working on and where are you putting the focus now?

Lutz Kampmann: We will continue to develop ITAR-free premium systems based on a unique pool of knowledge and perfectly tailored to individual requirements. We certainly intend to maintain our leading market position in the areas of FOG, MEMS and sensor fusion solutions in the years to come.

The company will continue to explore and redefine what is feasible using its systems expertise, from the modernisation or upgrade of legacy systems to the development of MEMS-based navigation for new platforms and systems. MEMS-based products are smaller, lighter and have lower power consumption. The next generation will be suitable for missile and torpedo applications but also for unmanned aerial systems and remote carrier devices.

The European: What are the key points for navigation here?

Lutz Kampmann: For the European Future Combat Air System (FCAS) and Medium Ground Combat System (MGCS) but also more generally, the requirements for navigation will be size, weight and accuracy. Future platforms will perform different tasks in the network; we will adapt to this and tailor our developments and products to receive and process signals and data from other sensors as well.

In addition to providing absolute position data, we are wor-king on solutions that can also map relative positions in a
measurable and usable form for the mission network. This will make a significant contribution to securing the mission and making it more resilient to electronic warfare attacks.

The European: You already mentioned that there is a spin-off to naval and land forces…

Lutz Kampmann: …yes, LITEF has applied what it has learned from aviation to land and naval systems as well as missile and torpedo applications. Inertial systems are needed for navigation of every type of vehicle, from main battle tanks to light armoured troop carriers, especially in a GPS Denied Environment. The same is true for the Navy. The limitations of GPS-only navigation will be exposed in any future mission by enemy jamming and spoofing. Robust and resilient navigation systems based on inertial sensors are needed to avoid jeopardising the mission and associate the use of different weapon systems. Our land portfolio is currently undergoing intensive revision.

The European: Your company is an independent company within the Electronic Systems Division of Northrop Grumman Corporation, USA. Does this mean that you are operating independently and do not exchange any technical or research data with the US owner?

Lutz Kampmann: Indeed, group affiliation has no influence on the development and production processes at LITEF. Northrop Grumman LITEF is a German GmbH, which supplies German cutting-edge technology. It is like a large medium-sized company, managed and operated independently in Germany, with all relevant decisions regarding technology & strategy taken in Freiburg. All relevant decisions are made without influence from the USA. For years, LITEF has been offering an ITAR-free portfolio, a stance which is supported by the Northrop Grumman Corporation, because it was recognised very early on that European requirements must be independent of American influence (ITAR-free). 80% of our supply chain is located in the so called “DACH region” (Germany, Austria, Switzerland). We intensively pursue our own technology developments and spend R&D funds to meet national and European, but not US, market requirements.

The European: This brings me to transatlantic armaments cooperation in general. What is the added value of cooperation with the US for European industries and what are the challenges in this respect?

Lutz Kampmann: In my opinion, there must be a transatlantic approach to safety, security, defence and joint missions. There is no either/or in arms cooperation between Europe and America. Communication between systems is extremely important. An example is the planned F35 which must be compatible with the Bundeswehr’s systems. It cannot operate in isolation but must become part of the alliance. Only then can it be operated efficiently.  For me, the most important keywords in cooperation are communication, interoperability and data exchange with the US and our NATO partners.

The European: Thank you, Mr Kampmann, for giving me these insights into your impressive company.