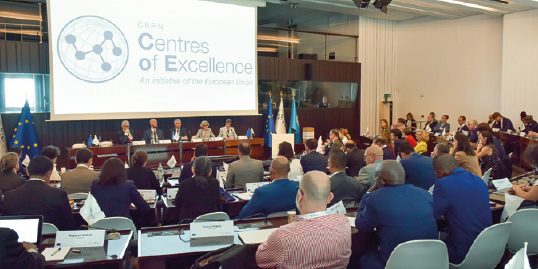 Report on the 8th National Focal Points meeting of the EU CBRN Centres of Excellence Initiative by Nannette Cazaubon, Paris

After a forced three-year break due to the Covid-19 pande­mic, the European Union Chemical, Biological, Radiological and Nuclear Risk Mitigation Centres of Excellence (EU CBRN CoE) Initiative held its 8th annual meeting of National Focal Points (NFPs) from 17th to 19th May in Brussels. Launched in 2010 by the EU, the initiative aims at increasing national and regional CBRN cooperation worldwide.
Hartmut and I were invited to join the event and to report on it. Since 2019 we have been following this successful initiative with great interest. We reported in our magazine on the last annual NFPs meeting (June 2019), and other events including a CBRN field exercise in Tashkent, Uzbekistan in autumn 2019. We were eager to know how the people involved in this international framework, with now 64 partner countries, managed to continue their work despite the pandemic, what impact the breakdown of in-person activities had on the initiative, and what the prospects are for the future.

The meeting took place at the “The Square” Meeting and Convention Centre in Brussels and was organised by the European Commission’s Service for Foreign Policy Instruments (FPI) and the United Nations Interregional Crime and Research Institute (UNICRI) with the support of the European Commission’s Joint Research Centre (JCR). The conference was attended by more than 100 participants with 51 National Focal Points (NFPs) out of, at that time, 63 partner countries and four observer nations (Chile, Djibouti, Mauritius, and Nigeria having become the 64th partner country most recently).

We discovered with interest the event’s new format, offering a combination of thematic panel discussions in plenary, bilateral and interregional meetings, a walking meeting, and last but not least the traditional award for the best “Regional Success Story” and the best “Innovative Regional Proposal”.

At the opening session, moderated by Natalie Pauwels, Head of Unit, Stability and Peace, FPI, all speakers underlined that despite the difficult circumstances due to the pandemic during the last two years, work under the EU CBRN CoE Initiative continued, with progress made across a range of different thematic areas and in the regions.

Marc Fiedrich, at that time Acting Director and Head of Service, FPI, recognised that the pandemic was a test for the initiative as experts and coordinators found ways to adapt to the circumstances, while Wiktor Staniecki, Deputy Head of Division, EEAS, who represented Joanneke Balfoort, Director for Security and Defence Policy, EEAS, pointed out that the initiative now has the maturity to support actions addressing security governance issues. Sabine Henzler, Director of Strategy, Work Programme and Resources, JRC, underlined that despite travel restrictions during the last two years, the JRC has continued to support the EU CBRN CoE Initiative with scientific and techni­cal assistance. Finally, Francesco Marelli, Head of Programme, CBRN Risk Mitigation and Security Governance Programme, UNICRI, highlighted the hard work of the persons engaged in the initiative, saying that they prevent CBRN threats from materialising by promoting a culture of safety and security.

Updates from the eight regions

The opening remarks were followed by regional analyses of the work done in the last three years. The Heads of Secretariat (HoS) of the eight regions shared their experience and highlighted the perspectives for the future. During this session, moderated by both Natalie Pauwels and Marian de Bruijn, Programme Coordinator at UNICRI, there was a common understanding that the enlargement of cooperation with adjacent CoE regions has a positive impact on the understanding of national work on CBRN mitigation. The participants agreed on the importance of involving more women in the process of CBRN mitigation and on the value of engaging the younger generation. A prize was awarded to the young Uzbek winner of the 2020 Central Asia drawing competition, who was also in attendance.

The morning of the second day was dedicated to a walking meeting. Hartmut and I appreciated this new format. We discovered the decorated booths dedicated to each Regional Secretariat presenting their activities with clearly designed posters and showing the variety and the specificities of their respective regions. Wearing the traditional dress of their home countries, the HoS and their staffs were on hand for three hours to answer questions and exchange ideas. The regional culinary delights were appreciated by the booth visitors and by us. When we asked participants about their feeling regarding this new method of communication, we collected positive feedback and compliments for the organisers. “We had never exchanged so profoundly on single issues as we did this morning”, one NFP said to me.

The afternoon of the second day was dedicated to three thematic sessions moderated by Silvia Bottone, Project Manager at FPI. The first session focused on developing and implementing the Regional Action Plans (RAPs), the second identified the available options for partner countries to develop CBRN expertise at national and regional levels, while the third session was dedicated to the organisation of a field exercise and considered the experiences from the recent successful experience of the ARZ 2021 exercise in Lebanon.

At the end of the second day, an interregional meeting between Central Asia (CA) and East and South East Europe (SEEE) took place, as well as a meeting of the African regions focussing on the preparation of an inter-Africa meeting in 2023 in Addis Ababa.

Thematic sessions continued on the third day. Experts from the European Union reported on EU CBRN related priorities in a plenary session moderated by Baskar Rosaz, FPI. While the first two presentations focused on the EU dual-use export control policy, the third presentation gave detailed insights into the EU approach to CBRN crisis response. A final presentation covered the European monitoring and emergency alert systems for nuclear and radiological threats.

Outcome of the 8th NFPs meeting

Having discussed a lot with the HoS and NFPs during this intense three-day meeting, the first after three years and coinciding with the ongoing armed conflict in Europe’s neighbourhood, Hartmut and I agreed that the EU CBRN CoE Initiative, which has funded 90 regional projects since its launch in 2010, has reached maturity.

For us it became clear that the pandemic, the war in Ukraine and the complex global security situation have encouraged the CoE partner countries to strengthen the ties between them and continue their efforts within the initiative to strive for the harmonisation of procedures for regional and interregional cooperation and efficient mutual assistance.

In her closing remarks Natalie Pauwels agreed that the initiative is more than just a network of experts but a community of people who know each other, “a sort of family”.