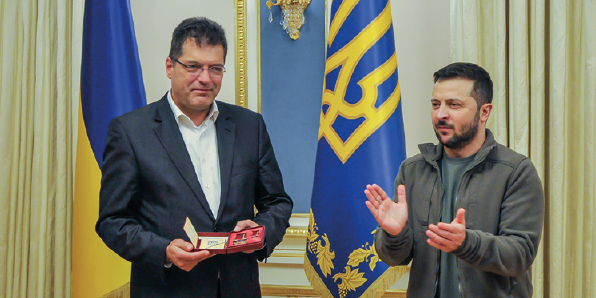 On 19th October in Kyiv, President of Ukraine Volodymyr Zelenskyy awarded a national order of merit to the EU Commissioner for Crisis Management Janez Lenarčič recognising the efforts in assisting Ukraine and people in need.

To this day, the European Response Coordination Centre (ERCC) has mobilised over 70,000 tonnes of Member States’ and Participating States’ in-kind assistance and supplies from the rescEU strategic stockpiles, transport and warehousing services, medical evacuation capabilities as well as donations from private sector thanks to the collaboration with all 27 EU Member States and 4 of the Participating States (Norway,

Ukraine: a wide range of needs

The assistance requested by Ukraine reflected the widest range of needs ever recorded in the history of the Union: from medical to agricultural needs, from medevac to energy-related requests to equipment to respond to chemical, biological and radio-nuclear (CBRN) threats. CBRN assistance provided to Ukraine so far included medical countermeasures such as

When EU Member States could not match directly high-priority requests from Ukraine with offers, the ERCC mobilised these resources from the rescEU emergency reserves in collaboration with the countries managing the relevant stockpiles. These already contained critical medical equipment. In addition, they were reinforced with CBRN countermeasures and response equipment based on Ukraine’s current and projected needs.

The overall financial value of the assistance provided to Ukraine and neighbouring States via the EU Civil Protection Mechanism amounts so far to over €446 million. Beyond the monetary significance of the assistance, the ERCC has acted as a coordination hub for the EU Member States and Participating States as well as for a wide array of international stakeholders. In so doing, the ERCC helped prioritise needs over a number of requests for assistance, which were circulated simultaneously to several institutions and organisations in the EU and beyond.

In relation to the CBRN assistance, the ERCC secured a channel of communication with key contacts in international organisations, which were active in the delivery of C, B or RN equipment for medical countermeasures to Ukraine. These organisations included e.g., the International Atomic Energy Agency (IAEA), US AID (which has been tracking CBRN assistance from several US government departments), NATO, the World Health Organisation (WHO), the International Committee of the Red Cross (ICRC) and the International Federation of Red Cross and Red Crescent Societies (IFRC). Liaison officers from IFRC and the USAID were hosted in the ERCC. This coordination allowed to proactively deconflict any offers of assistance and ensure a better overall coverage of the needs expressed by Ukraine.

Which CBRN capabilities can the EU count on?

When a CBRN disaster occurs, the affected country is primarily responsible to organise the disaster response including by deploying relevant resources and specialist teams. Should there be a need for surge capacity, the affected country can request assistance to the ERCC. After a rapid analysis of the request, the ERCC considers whether the capabilities requested coincide with those available in the European Civil Protection Pool, which currently hosts CBRN detection and sampling and CBRN urban search and rescue capabilities including specialised teams and equipment. These are existing capabilities that France, Denmark, Portugal, Germany, Romania, Greece and Italy have pre-committed and are either already certified by the European Commission or are in the process of being certified. The Commission reimburses up to 75% of the deployment costs inside or outside the EU and supports the upgrade or repair of the capabilities to ensure their readiness and fitness to be promptly deployed in case of activation.

The 2019 “Member States’ Preparedness for CBRN Threats” report of the European Parliament found that EU Member States do not generally maintain stockpiles of CBRN medical countermeasures, and that preparedness could be improved[1]. It reported that while some countries have their own reserves, these would be sufficient to cover only a part of the potentially affected population. Indeed, disrupted supply chains and long procurement times may present a structural weakness in the response to large-scale CBRN emergencies. In other words, there was a need for an additional layer of protection beyond national and Pool capabilities. rescEU responds to this need by offering a European reserve of capabilities that serve as surge capacity in case of natural or human-induced disasters, inclu­ding health crises.

Primarily intended to support EU Member States[2], rescEU capabilities are 100% funded by the European Union. So, if national and European Civil Protection Pool capabilities are insufficient or do not match the request of the affected country in terms of quantity or technical specifications, the ERCC may activate the rescEU strategic reserves.

In CBRN, three streams of capabilities are under development comprising decontamination, detection and CBRN strategic reserves for several hundreds of millions of euros.

1. rescEU decontamination capabilities will be developed by Croatia, Germany and Spain and will boost the capacity of the Union to decontaminate infrastructure, vehicles, buildings, critical equipment and affected people (mass decontamination). Teams of experts will be responsible for the development of these capabilities and the readiness of specialist teams and equipment, which will also be able to be pre-deployed ahead of high-visibility events or major public events such as the Olympic Games.

2. rescEU CBRN stockpiles will focus on medical countermeasures and response equipment that can be used to quickly replenish national stocks after a sudden incident or that can be prepositioned in case of sudden and temporary heightened risk. The war in Ukraine has de facto accelerated the implementation of these capabilities as selected medical countermeasures and equipment were included in the existing rescEU medical stockpiles and consequently mobilised to ensure prompt relief in the context of the war.

3. Finally, similarly to decontamination, rescEU detection capabilities will count on teams of experts and equipment that will be able to be pre-positioned temporarily ahead of major public events or deployed after an incident. They will cover detection, identification and monitoring with the ambition of relying on innovative technologies and integrated communication systems.