The Ukraine war and the rivalry of the great powers 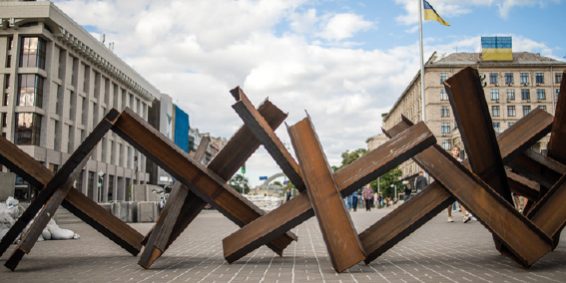 The 21st century is marked by the rise of the Peoples’ Repu­blic of China (PRC) as an economic and military world power and by the rivalry between the great powers: the United States of America (US), Russia and China.

The Ukraine war has made it clear that only China, and not Russia, can replace the US as the leading world power.

The US National Security Strategy (10/2022) states that “the PRC is the only competitor with both the intent to reshape the international order and, increasingly, the economic, diplomatic, military, and technological power to do it. Beijing has ambitions to create an enhanced sphere of influence in the Indo-Pacific and to become the world’s leading power”.

The ambitions of the US and Russia

It is the unspoken geopolitical goal of the US in the Ukraine war to weaken Russia poli­tically, economically and militarily in order to be able to concentrate on the conflict with China. For this conflict, the US want to integrate the European states into a network of partners and allies of the same unity as against Russia.

In this regard, NATO is forming an important bridge. The US has managed to position NATO against China alongside regional allies such as Australia, Japan and South Korea. The NATO Strategic Concept adopted on 29th June 2022 states that it will “address the systemic challenges posed by the PRC to Euro-Atlantic security and ensure NATO’s enduring ability to guarantee the defense and security of Allies.”

Russia wants to maintain its status as a strategic nuclear superpower equally with the US, reduce the influence of the US in Europe – at least in eastern Europe – and secure its position as a world power by staying an indispensable supplier of raw materials and energy.

Dependent on Russia for energy supply and on the US for security, depending economically and technologically – especially in digitalisation – on both the US and China, struggling with self-made challenges due to internal contradictions, Europe, in the power calculation of the great powers, is falling more and more behind.

European states have stood shoulder to shoulder with the US in solidarity with Ukraine, which was attacked in violation of international law, and are providing political, economic, financial and military support to the country. The European Union (EU) intends to further expand military assistance to Ukraine through arms deliveries from Member States and through the training of Ukrainian armed forces. To this end, a “European Union Military Support Mission for Ukraine” (EUMAM Ukraine) and training commands will be formed in two Member States, even though this increases the risk of an escalation of the war in Ukraine, both with regard to an intensification and prolongation of the fighting and a possible expansion or even a nuclear escalation.

The impact of the Ukraine war on Europe

Against the background of the geopolitical rivalry of the great powers, the Ukraine war has brought Europe to a crossroads. This war is not only about Ukraine’s security and territorial integrity, but in the long term it is also about a European security and peace order, in which all the states of the European continent have their place. However, the dramatic global economic consequences of this war for Europe as an industrial and business location are becoming increasingly apparent.

In the “economic war” against Russia, the EU has imposed extensive sanctions against it. These were started with the aim of forcing Russia to end its attack on Ukraine and on the assumption that the sanctions would neither affect energy prices nor harm European states. Exactly the opposite
happened.

Germany has accepted major economic disadvantages in order to dispel American reservations. For a long time, the US saw a risk in combining German capital and German technology with Russian raw materials and Russian production potential. However, Germany has now cut off energy supplies from Russia and is providing Ukraine with significant support – through financial donations, the supply of weapons and military equipment, and not to forget, the sanctions against Russia. The long-term damage to the German economy, in particular the consequences of the energy emergency expected for this winter and the effects on the international compe­titiveness of the German economy will also have a significant long-term impact on the entire European Union. To make matters worse, there are also signs of economic restrictions in relation to China. If globalisation, which has developed so beneficially for the German and European economies, is further restricted, irremediable damage will result for the German economy, which is dependent on world trade, and for Europe as a whole, including extensive deindustrialisation.

But Europe is an economic power factor, despite the setbacks resulting from the sanctions against Russia. For China, therefore, the question of whether Europe will submit to US geopolitical goals or maintain its own course is of vital
importance. Because Europe has a say in whether China succeeds in replacing the US as the dominant world power.

New blocs and an uncertain future

The war in Ukraine has encouraged the formation of competing geopolitical blocs. As the US, EU and NATO move closer together, a second geopolitical bloc has emerged around China and Russia. Its core is formed by the BRICS countries, Brazil, Russia, India, China and South Africa, which currently make up 40% of the world’s population (G7 + Japan: 12.5%). Furthermore, the Shanghai Cooperation Group was formed with China, India, Iran, Kazakhstan, Kyrgyzstan, Pakistan, Russia, Tajikistan and Uzbekistan. Other states want to join both groups.

Western democracies, joined together in the European Union, have neither found a way to prevent the war in Ukraine nor contain it and achieve a negotiated peace by balancing the interests of the powers involved. Rather, the fate of the European continent will be decided by the two main players in this war: the US and Russia.

Russia obviously cannot achieve all its political war goals despite its recent military successes. Neither will the US succeed in eliminating Russia as a geopolitical rival. Furthermore, it must be assumed that a military defeat of Russia would not be in China’s interest. The US is aware that China would use such a development both to relieve Russia and to assert its own interests, but that the US would not be able to wage a two-
front war.

The American strategy expert Harlan Ullman, author of the doctrine of “Shock and Awe” in the 1990s, therefore asks with concern, regarding the war in Ukraine: “Has the United States committed an unforced error by opening a strategic two-front military confrontation against China and Russia?” Harlan describes the American two-front strategy as a “ticking time bomb”.

This is also true for Europe. Not only the American government but even Europeans have obviously underestimated the geostrategic dynamics of their engagement in Ukraine.  The war in Ukraine is a warning sign that can only have one consequence: resolutely taking the path to geopolitical self-assertion for Europe, politically, economically, technologically and, last but not least, militarily.