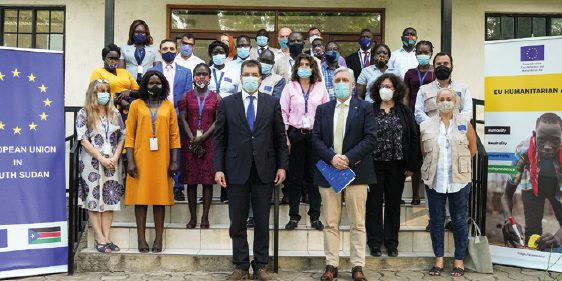 As the European Union (EU) comes to terms with a rapidly changing global environment, hardly anyone disputes the fact that the EU needs to do more to provide for its own defence and security. The continued economic rise of China, the UK’s departure from the EU and growing confrontations with Russia jeopardise the EU’s global strength and influence.

An assessment of EU defence capabilities and the range of threats confronting it underpins a shared understanding that a more robust European defence is only possible in cooperation with strategic allies and partners. In this context, more comprehensive and enhanced EU-NATO coordination is essential to ensure compatibility and complementarity without duplicating efforts.

The European Security Strategy (2003) and the EU Global Strategy (EUGS, 2016) place the importance of pursuing EU partnerships as one of the Union’s strategic goals. Similarly, the EU Strategic Compass (https://bit.ly/2Q1oTyU), which is in the making, intends to foster a strategic deepening of EU relations with its partners. Interestingly, the EU’s agenda on renewed multilateralism fit for the 21st century (https://bit.ly/3lYrAgP) of February 2021 defines more precisely what kind of relations the EU is looking for. While it will deepen partnerships and alliances with third countries and organisations with whom the EU shares democratic values and priorities, it will seek only a common ground on an issue-by-issue basis with others. This same logic applies in the defence and security realm.

Even though the EU’s pursuit of strategic autonomy has recently given rise to a lot of controversy, EU leaders have reaffirmed that increasing the EU’s capacity to act autonomously, will not weaken but rather strengthen the partnership with NATO. Simi­larly, when examining EU political documents and administrative regulations, particularly those that govern the Permanent Structured Cooperation (PESCO) and the European Defence Fund (EDF), they indeed reveal no explicit intention of the EU to question the position of NATO and the transatlantic bond.

How to involve third countries?

According to the last GLOBSEC study (https://bit.ly/2QEfuxA), most EU Member States are open to the possibility of participating in emerging EU defence initiatives and structures of like-minded states (such as Norway, Canada, the US, the UK, etc.).

However they are not so open towards countries that do not share ‘the values on which the EU is founded’ or do not ‘respect the principle of good neighbourly relations with Member States’ (e.g. China or Turkey), in particular in PESCO projects or defence industry projects.

But considering the substantial interest shown by non-EU countries and the opportunities the partnership could lead to (for example in PESCO projects, Common Defence and Security Policy (CSDP) missions, the EDF, or cooperation with the European Defence Agency), EU Member States will need more time to overcome existing divergences in their attitudes towards third country participation in EU defence projects. It is becoming increasingly apparent that one path forward for overcoming the resistance of some EU Member States could be to differentiate the shape and form of relations that the EU establishes with different partners. It is likely that the EU will create three or four categories of partnership, each marked by different privileges such as access to the EU internal market and possibly – though more controversial – access to some EU funding from the EU defence budget (see box).

There is no doubt that the United Kingdom will have a special role in the EU framework, once it is willing and ready to discuss mutually beneficial cooperation with the CSDP.

Strategic autonomy and the capacity to act

Generally, the EU should keep evaluating the type of institutional structure that will best accommodate its defence and security aspirations, reflect practical realities on the ground and fit Member States’ interest. It is in the EU’s best interest to continue developing and reinforcing its partnerships. Even though the EU reaffirms its goal of increasing its capacity to act autonomously and work towards its strategic autonomy, it has not always been possible either in terms of the defence industrial dimension or at the operational level. The EU’s task therefore should now be to square “autonomy” with openness. This implies, in EU speak, a trajectory towards “open strategic autonomy” (https://bit.ly/39MJz4S). The EU is aware of this challenge and EU leaders have recently called for a technology roadmap to be ready by October 2021. The roadmap would assist in not only boosting research, technology development and innovation, but also in reducing their strategic dependencies on critical technologies and strategic value chains.

But at the end of the day, the EU’s primary rationale for cooperation with third countries in the defence realm should be interoperabi­lity and the efficient use of resources, in order to bolster “European capacity to act.” More specifically, third countries, where necessary, could contribute resources and capabilities (military, technological and industrial) that might otherwise not be available, as well as bring technological know-how to EU Member States. It is also closely interlinked with the nature of the modern defence industry and the coalition character of any likely European military operation. While the former relates to the complexity of modern armaments resulting in the costs of research and development increasing exponentially with each subsequent generation of technology, the latter manifests in the approaches of major EU Member States in addressing gaps in their industrial and technological capabilities following the end of the Cold War, according to another GLOBSEC study (https://bit.ly/31MCEnY).

Towards a global stage

To sum up, while reinforcing European defence through deeper partnerships with like-minded countries (‘partners of choice’) is already on the EU agenda, building wider partnerships will be more interest-based and tailored to the specific issue or partner. As the EU aims to bolster its position on the global stage, it will be crucial to define and project to the outside world what it views as it strategic  ambitions. There is no doubt that building the EU’s credibility as a peace actor and its security and defence structures can help support multilateral efforts to maintain, sustain and build global peace.

Lucia Rybnikárová, MA
was born Slovakia and holds a master’s degree in European studies from the Katholieke Universiteit Leuven in Belgium, where she focused on foreign and security policy of the European Union. She currently works as a project coordinator at GLOBSEC Policy Institute, studying the potential risks and opportunities in the area of defence for Europe and its implications for non-EU member states and more specifically for Norway.

Dr Kinga Brudzinska
holds a PhD in arts of political science from the University of Warsaw and a diploma in Latin American studies from the Monterrey Institute of Technology and Higher Education in Mexico. She has 10 years of professional experience in country-specific and policy analysis and advice. Her main research interests lie in the fields of EU Common Foreign and Security Policy and EU institutional architecture, with a particular focus on the concept of differentiated European integration.

According to a recent GLOBSEC study, four ‘categories’ come to mind.

1. Associated ‘partners of choice’: the like-minded countries that could enjoy access to the EU market and its programmes but, as non-EU members, would be excluded from decision-making processes (for example the US, Norway, the UK).

2. ‘Less privileged but still close’: countries like Turkey that are part of NATO and have already participated in several CSDP missions, however, as of now, do not have ‘good neighbourly relations’ with all Member States.

4. ‘Ad hoc partners’: a probably only symbolic opportunity for collaboration that would be available to regional partners, like the African Union, as seen in South Sudan.