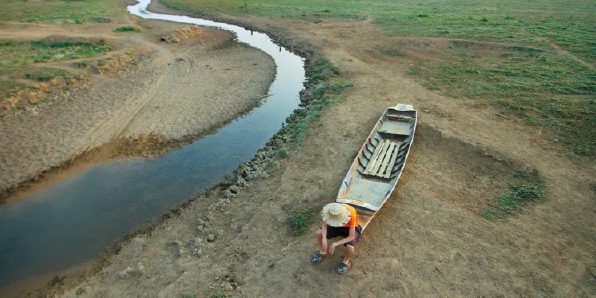 Governments, industry, and civil society are facing urgent political and economic risks to water security. As the impacts of climate change become more apparent, demand grows and supply is increasingly constrained. Each year at least 4 billion people experience severe water scarcity for at least one month of the year and nearly 500 million are exposed to water scarcity all year long. In the future, water stress will touch on almost all aspects of life including human security, economic growth, political stability and interstate conflict and it will be an increasing push factor for environmental migration.

Today, poor governance and resource management are behind the majority of water crises, but climate change is playing an increasing role. Climate change’s impact on water resources is multidimensional affecting the quantity, quality and timing of water supply. Multiple climate models predict increasing variability, intensity and occurrence of droughts and floods. Rainfall will almost certainly decline in mid-­latitude regions, and all regions are expected to experience higher temperatures. At the same time, climate change creates more water in the atmosphere increasing the likelihood of typhoons and hurricanes.
Global water demand is reaching unsustainable levels. In addition to environmental factors, population growth, lifestyle changes, and agricultural practices will contribute to excess demand for water in the next 20-30 years as the quality and quantity of water declines. Global water use is likely to increase by 20-50 percent by 2050 with industrial and domestic use sectors growing at the fastest pace.
Developing countries experiencing steady economic growth are especially prone to water insecurity. As people move up the economic ladder, their lifestyles are more water intensive. This will be seen largely through indirect means such as changes in diet and increased demand for goods that are water-intensive to produce such as cars, electronics, clothing and home construction materials. Countries may have trouble meeting expectations from their populations to improve water infrastructure.
Global water supply is also a concern. The worlds’ aquifers are being depleted at an alarming rate. In large parts of the Middle East and North Africa (MENA), South Asia, as well China and Mexico, groundwater use is already the prime water source. Years of over withdrawal extraction, pollution and ineffective water policies have degraded supply, in some cases irreversibly.

A growing base for water disputes

Nation states’ unilateral development of water infrastructure on shared international rivers signals potential conflict. About 3700 hydropower dams are under construction world-wide, notably in Africa and in Asia. In Asia, new dam construction threatens the food security of the lower riparian states in the Mekong River System.
Currently, the preponderance of water stress-related conflict occurs within states where local competition for water exacerbates social or economic cleavages and corruption is prevalent. In recent years, mass protests involving these issues have occurred in Algeria, Brazil, China, Egypt, India, Iran, Iraq and South Africa.
There are nearly 300 transboundary surface water basins and many aquifers that cross international borders. The presence of an agreement between countries to share a water source does not guarantee effective or sustainable use. In some cases, including in the Indus and the Nile River Basin existing treaties themselves constrain governments’ willingness to enact more sustainable water management practices. Ongoing transnational water disputes diminish national capabilities to effectively manage water resources.

Egypt is an example where transnational water disputes and the encroachment of climate change could combine to disastrous effect. This scenario was played out in a role playing exercise at the Emirates Diplomatic Academy in 2019 where I acted as a facilitator. It unfolded in 2030, starting with impacts of the Grand Ethiopian Renaissance Dam on the upper reaches on the Blue Nile. The dam had severely impounded water reducing the flow of the river which provides over 90% of Egypt’s water supply. Climate change-induced sea level rise caused tidal surges, flooding and salinization of the Nile Delta and river banks where the country’s breadbasket lies. These conditions along with desertification were chief factors leading to a mass exodus of migrants, many of whom fled to southern Europe where the capacity and willpower to absorb them was limited. Much of the population that remained in Egypt was radicalized against the government. Regional and international institutions were caught flat-footed by the scale of the crisis.
Environmental migration is already discernible in the Americas in the dry corridor including the nations of El Salvador, ­Nicaragua, and Honduras. These countries are experiencing some combination of population growth, climate change induced environmental degradation and existing violence. A poverty gap between urban and rural populations is caused in part by rural poor people’s high reliance on water resources for agriculture. These push factors drive migration to the cities where desperate conditions endanger personal security and encourage a stream of migration to the United States. As of March, the Biden Administration is grappling with renewed pressure on the southern border.
Climate change related migration including from nations under water stress will be one of the most substantial global challenges by the middle of the century. The exact number of migrants will be difficult to discern because it depends on variations in emissions and adaptation policies. Most of the migrants probably stay within national borders. But if they cross a border, they will not be considered refugees. This calls for international recognition of the problem, a better understanding of its dimensions and a willingness to tackle it.
It is incumbent on nations to develop humane immigration policies. The Nansen Initiative, a state-led consultative process launched in 2012 by Switzerland and Norway to build consensus on a protection agenda to address the needs of people displaced across borders by climate change is a good start. Under the Nansen framework, states may voluntarily admit environmental migrants based on humanitarian considerations while building consensus on practices to manage climate displacement risk in the country of origin.

Preparing a report on climate migration

A great deal more research is needed to understand the causes and consequences of climate migration. Recognizing this, President Biden called on the U.S. government to prepare a report that meets three objectives. It must

Dr Marcus DuBois King
is the John O. Rankin Associate Professor and Director of the Master of International Affairs Program at George Washington University. His research focuses on the consequences of climate change for fragile states. Prior to his appointment Dr King was a researcher at CNA Corporation’s Center for Naval Analyses. He has held positions in the U.S. Departments of Energy and Defense. His book, Water and Conflict in the Middle East was published by Oxford University Press in 2020.
Web: https://elliott.gwu.edu/marcus-king

1 The Nansen Initiative, About Us: Towards a Protection Agenda for People
Displaced across Borders in the Context of Disasters and the Effects of Climate
Change, https://www.nanseninitiative.org/secretariat/
2 Joseph R Biden Jr. “Executive Order 14013-Rebuilding and Enhancing Programs
To Resettle Refugees and Planning for the Impact of Climate Change on Migration February 4, 2021.” Daily Compilation of Presidential Documents (2021): 1–6 https://bit.ly/3eAo88N