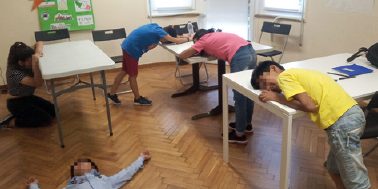 On 28th July, we celebrate the 70th anniversary of the Geneva Refugee Convention (the Convention). Its core concept is the protection of every human being who fears persecution because of race, religion, nationality, membership of a particular social group or political opinion.

Non-refoulement is a legal obligation

In 1999, the EU, while planning the creation of a “Union of Freedom, Security and Justice”, expressed without reservations its commitment to the obligations of the Convention. This was included in the Council Conclusions (Tampere) in article 3: the common policies (for asylum and migration) must be based on principles which “…. offer guarantees to those who seek protection in or access to the European Union”. The commitment to the Convention is deemed as a milestone (article 4) and as a basis for the Common European Asylum System – CEAS (article 13), concluding: “thus ensuring that nobody is sent back to persecution, i.e., maintaining the principle of non-refoulement”1 (no returns). This protection and guarantee of constitutes a legal obligation for states. Furthermore, with the Council Conclusions the EU emphatically declared that the concept of European security and freedom is not contradictory to the concept of international protection. This is critical to bear in mind. As Europe seems unable to affirm a clear and consistent migration and asylum policy, more and more the Convention looks like an obsolete document: returns, asylum procedures denying the right to protection (long lasting restriction of applicants in questionable conditions, unfounded decisions), lack of integration policies for the recognised refugees etc.

In the same line, Member States disregard the Convention’s provisions and openly deny the right to asylum to those in need. Hungary’s Prime Minister Orban said “We don’t see these people as Muslim refugees. We see them as Muslim invaders”.2 Poland’s Prime Minister Morawiecki does not want to take refugees from Syria or other EU Member States.3. Denmark recently passed a law to relocate asylum seekers from Danish soil to a third country where the applications will be processed and protection will be granted. The government party’s immigration speaker Rasmus Stoklund said “we hope that people will stop seeking asylum in Denmark”. How is this compatible with the Convention and the EU’s asylum policy?

A growing tendency to externalise the problem

One month ago several of the EU’s most powerful countries (Germany, France, Belgium, Luxembourg, the Netherlands) along with Switzerland sent a letter to the Commission, complaining that Greece does not do enough (mainly it does not integrate refugees) to stop or prevent secondary movement.5 Last year, on World Refugee Day (20th June 2020), the European Commission and the High Representative released a joint statement which concluded: “The European Union is founded on democratic values and respect for human rights. To that end, we will continue to play a leading role in guaranteeing the protection of refugees”.6

It seems that international protection needs protection in the EU. Instead of trying to formulate an asylum policy that is compliant with the Geneva Convention and aligned with the basic principles of the EU (solidarity, responsibility sharing etc) we see a growing tendency to enforce external borders, build walls, hire guards, deter people from seeking protection in the EU and externalise the problem.

Externalisation aims to shift the problem not only to countries outside the EU, but also to other EU member states, like Greece. But how is it possible when the rich and powerful of the EU seem unable or unwilling to take a share of the responsibility and ask Greece to carry all the responsibility alone? And how it is possible to play pass the buck with human beings in need?

Greece is not only at the south-eastern European border, making it an ideal entry point into Europe, but it also neighbours Turkey, which hosts 3,6 million refugees, almost one fifth of refugees globally (the total number of refugees is 20,4 million according to UNHCR).7

Due to its geographical position, Greece has received thousands of asylum seekers and irregular migrants, whom it accepted and hosted, “saving the honour of Europe”, despite the economic crisis it went through in the last decade.

Europe’s contribution has mainly been financial, whereas other tools were used sporadically and without consistency or success. But is money all it takes for Europe to stand in solidarity with Greece? And what direction is this solidarity taking? Collectively building a wall to keep “invaders” out, blocking every and any entry, even for those that need protection, paying or giving other incentives to third countries to accept asylum seekers and irregular migrants on their soil?

Of course not. First, there can be no sustainable and “European” asylum and migration policy without full respect to the protection of human rights and to the principles of the Geneva Convention. By adopting such a migration policy, the EU stands in solitary with Greece. Europe must assume responsibility and demonstrate global leadership. In times when human rights are at stake, Europe must lead the way and prove that there cannot be shortcuts or deserters when it comes to their protection. What is really the message that rich democracies send when they make people in need of protection suffer just to make a point to others?

Second, Greece cannot become the Nauru8 of the EU where asylum seekers will be held indefinitely “stored” and forgotten.9 It cannot be Europe’s exile.

The way forward is twofold: the EU must understand that this is a challenge that concerns all its members, and, on the other hand, Greece must fulfil its obligations.

The integration of refugees is a challenge in Greece. How can there be no secondary movement if they do not have any support to start a new life, get a decent job and have access to education and healthcare? This is not about a welfare system that subsidises refugees forever; it is rather about a system that will force them to integrate smoothly. Greece calls for solidarity, but it also has to assume its responsibility and prove it is a reliable partner. Creating “push” factors that enhance secondary movement cannot be a viable solution.

Funding is not enough

Still, the EU has to demonstrate its solidarity in practice, with operational and institutional support. Greece could benefit from the experience accumulated in other EU states. Asylum caseworkers, interpreters, experts in psychological health, forensic experts, etc, are just some of the ways that states or EU agencies (EASO) can really help and support.

Funding, as much as it is necessary, is not enough. There need to be institutional changes that will regulate things on a new basis, for instance, the mechanism of permanent and obligatory relocation for all EU member states, as well as resettlement directly from third countries and agreements for regulated movement to Europe for specific categories and scopes (students, seasonal workers, etc). Funding is needed as reception and integration are costly and this cannot just be the responsibility of one member state. Sustainable multi-annual projects have to be supported financially as well, to achieve long-term benefits both for refugees and the states.

Often the discussion about the Common European Asylum System is limited to money and legal frameworks. But it is important to include concepts such as morality and compassion. It is human beings that we are talking about and there can be no progress or good if the most vulnerable and those in need are left behind.