Europe’s special interest in a strong NATO, partnering with the European Union 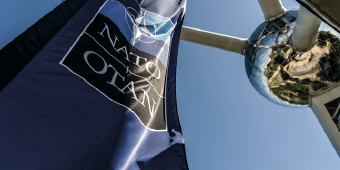 The 2020 US election marked an important change in transatlantic relations. Contrary to his predecessor, President Joe Biden sees the EU as a partner, not a “foe”. He honors the US’s international commitments, like the Paris Climate Agreement. And he understands the added value of international institutions. NATO, in his view, is more than a bargain, but the strong foundation on which transatlantic security and shared prosperity can be built. Donald Trump reportedly called NATO obsolete. President Joe Biden calls NATO’s article five a “sacred commitment”.1

Europe is a backbone for US global policy and …

For the US, the EU remains an indispensable economic and military partner: both economies amount to more than 40% of the world’s GDP and more than 40% of global trade in goods and services.2 In geopolitical terms, the US also continues to have a strong interest that Europe remains “whole and free”: its military presence in Europe remains crucial for its global ambitions, power projection into the wider Middle East and containment of Russia and China. And the 30-nation NATO alliance gives it a considerable political advantage over its great power competitors.

But Europe has an equally strong strategic interest in preserving and, in fact, deepening transatlantic relations – and NATO in particular. NATO’s core function of nuclear deterrence acts as a bulwark against the renationalisation of European nuclear policies. Embracing small and big countries alike, NATO accords equal security for all through its article 5 commitment and forestalls the creation of new alliances on the continent. Its countless consultation processes foster trust among the allies and contribute to keeping inter-allied conflicts (for instance between Greece and Turkey) manageable. Its modus operandi (NATO decides by consensus) provides it with legitimacy in the eyes of European populations, many of which are skeptical about military affairs.

Especially for the central and eastern European states, NATO continues to be the only viable security option in the struggle to remain free from Russian interference in its “privileged abroad”. And when it comes to crisis management, NATO provides the best option for burden-sharing and a shared buy-in to European security problems. Through numerous interoperability programmes, NATO fosters multinational military cooperation. Last but not least, its over 40 partnerships provide a platform to discuss security issues worldwide.

NATO and the EU have no separable interests

As the June 2021 NATO Summit has made clear, NATO will have to continually adapt to new threats, be it the emergence of China as a systemic challenger to the international order, Emerging Disruptive Technologies (EDT), climate change or evolutions in cyber space. And all of this happens against the backdrop of Washington’s strategic reorientation toward the Asian Pacific region. Europeans can and must do more to sustain NATO’s relevance in the eyes of an American public increasingly wary of its security commitments to the “Old Continent”.

As Secretary General Stoltenberg has said, NATO must “stay strong militarily, be more united politically, and take a broader approach globally”3 if it wants to be able to face the multitude of threats and challenges. But this can only happen if Europeans increase their efforts to strengthen the European pillar inside NATO. In this regard, many recent developments have been positive. With the Permanent Structured Cooperation (PESCO) and the European Defence Fund, some of the Europeans’ capability shortfalls are starting to be addressed. The EU is conducting a major review, the so-called Strategic Compass, in order to define the level of its ambitions. And the EU and NATO have signed agreements to further their cooperation. They now cooperate on a range of 74 projects.

The concept of “European autonomy” is divisive

Developing European capabilities should not mean decoupling European from American security. The buzzword of “European autonomy” is a divisive concept, at least if it nurtures the illusion that Europe can defend itself without crucial US support. However, the EU does have to shoulder more responsibility for security and order in its near abroad. With the instability in its surroundings, where conflicts can flare up from northern Africa to the Balkans, it is easy to imagine a scenario where European peacekeepers could be called upon to provide security.

Therefore, the first element of a renewed partnership between the EU and NATO must be that the EU strives to become capable of fielding its EU Battlegroups in a real scenario. Given its limited capabilities, this would necessarily be a modest operation, but the Europeans must nevertheless strive to achieve it. This also implies finding the political arrangements to avoid strategic cacophony in a situation that demands fast action.

The second element is that, in a world where economic prosperity is largely dependent on resilience in telecommunications and the cyber domain, the EU must come to terms with its relationship to China. While it seems unlikely that the US would ask European militaries to fight for Taiwan, it is clear that the EU can add much value to international security if it cooperates closely with NATO on questions like cyber defence or disinformation campaigns. Especially because of the low-intensity nature of hybrid warfare, this domain is a good candidate for cooperation between NATO and the EU.4

The third element is that the EU can add much value to deterrence in the east of EU territory, notably through its PESCO project on Military Mobility in Europe. This and other projects can contribute to allied deterrence if they succeed in standardising cross-border military transport procedures via rail, road, air or sea. Similarly, all of the EU’s new defence initiatives are useful if they help reinforce NATO’s ongoing efforts in deterrence and defence.

In 1991, the foreign minister of Luxembourg, Jacques Poos, infamously claimed that his was “the hour of Europe”, but in what followed, Europeans were unable to live up to their own expectations to keep the peace in the Balkans. This must not be repeated. In an increasingly dangerous world, Europe’s ability to keep the peace and project stability depends on a strong transatlantic relation and a good relationship between the EU and NATO. It is in our own hands.