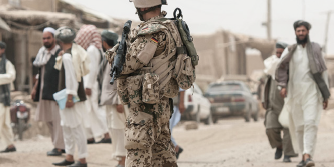 The failure of the NATO concept in Afghanistan

The European: General Kujat, in politics, a thin line separates victory from defeat. Any military intervention has to be carefully weighed up and armed forces should only be engaged if, on the basis of a comprehensive analysis of the situation, there are good prospects of success. Who should take responsibility for the debacle in Afghanistan?

Harald Kujat: Victory has many fathers but defeat is an orphan. In this case however, the opposite is true. It is the alliance, in other words, all its members who must take responsibility for the failure of the intervention in Afghanistan. What failed was the attempt to turn a profoundly Islamic country into a free society with democratic structures and respect for human rights. Let’s not forget that the political goal was to create the conditions in which the Taliban would be prevented from regaining political influence and military power. The failure is that of both the West and of Islam.

The European: So it turned out to be impossible to defeat the Taliban.

Harald Kujat: Initially, it is true that the Taliban were not defeated but they were beaten back everywhere. However, they were able to retreat to Pakistan and regroup there. Over all these years, it proved impossible to deny them that strategic advantage. That is an essential reason why they were not defeated.

The European: Let us go back a few years. I remember a public debate in 2010 in which the former German Chancellor, Helmut Schmidt, concluded that NATO and its partners’ “war goals” were unachievable. You yourself said, at about the same time, that politically the intervention had failed.

Harald Kujat: Chancellor Schmidt was a politician with a firm grasp of security issues and sound strategic judgement. And indeed, I too have often and publicly said since 2011 that lessons must be learnt from the failure of this intervention.

The European: That was not what people wanted to hear but what caused you to say it?

Harald Kujat: The political concept based on the Lead-Nation principle was not sustainably implemented:  the political system was corrupt to the core, there were no economic success stories, particularly of a structural nature, and the security forces – police and military – were not able to provide adequate security, neither within the country nor to ward off attacks from outside.

The European: So what mistakes were made? As the German CHOD at the time, you advised former Chancellor Gerhard Schröder to intervene and a little later, you were Chairman of NATO’s Military Committee, its senior military body.

Harald Kujat: Initially, we should have stepped up our military efforts to prevent the Taliban from returning to Afghanistan. The shift from active combat to a training role should not have occurred abruptly in 2014 but more gradually, on the basis of the increasing capabilities of the Afghan security forces. There should have been far more vigorous attempts to fight corruption and drive the country’s economic growth. Finally, efforts should have been made with Afghanistan’s neighbours to promote regional stability, and particularly to dissuade Pakistan from supporting the Taliban and stop the export of narcotics, their main source of finance.

The European: So, who had the real power in NATO in respect of the intervention in Afghanistan?

Harald Kujat: The United States made the largest military contribution. However, at the start of the campaign a lot of its troops were still tied up in the war in Irak. Politically, in 2014, 2020 and finally in April 2021, the United States took decisions with obviously no prior in-depth consultation of its allies. That contributed to the failure.

The European: When did it become clear to you that the United States’ only remaining goal was to withdraw? In order to prepare the ground for that step, the Afghan combat forces had to be trained and equipped in a very short time.

Harald Kujat: In 2014, President Obama pressured his allies to stop the combat mission and concentrate only on training the Afghan security forces. That made it clear to all, including the Taliban, that it would only be a matter of time before NATO withdrew completely from Afghanistan.

The European: The Doha Accord of 29th February 2020 gave the Taliban a free passage. It must have been indeed clear at that point, at the latest, that the US would withdraw. Once President Biden had decided in 2021 to implement the Doha Accord signed by his predecessor, were there any talks among the allies about a coordinated withdrawal?

Harald Kujat: Immediately after President Biden’s announcement on 14th April 2021 that the US would withdraw by 31st August, the allies decided to start withdrawing on 1st May. The actual withdrawal was not however, as one might have expected, planned and coordinated by NATO. The evacuation of local support staff could have been done in parallel and step by step .

The European: I find that totally incomprehensible and certainly no great publicity for NATO! What will be the consequences for the future?

Harald Kujat: Training and equipment missions can only succeed if there is a stable political situation, if a majority of the population supports the mission and if the national security forces are prepared to stand fairly and squarely behind their people and their government. A similar mission in Irak failed. The European Union’s current intervention in Mali will also fail. In future interventions, political, economic and social measures must remain under a single unified international administration until such time as a positive outcome is clearly achieved.

The European: What can you say about the role of the military?

Harald Kujat: Military measures can only create the conditions for the tasks I have just described. And we must accept that there are limits to the possibility of exporting our western values through military campaigns. What is important for Europeans at this juncture is to strengthen their military capabilities in order to reinforce the European pillar of NATO and make it a force to be reckoned with, so that it is able, if necessary, to defend its own interests by itself.

The European: General Kujat, many thanks for this interview.