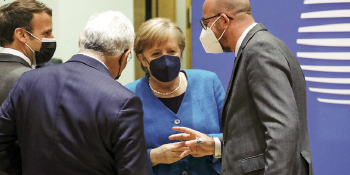 For a long time, the German federal government, led by Chancellor Angela Merkel, found it difficult to discuss Europe’s “strategic autonomy” in the Common Foreign Security and Defence Policy (CSDP). Representatives of the outgoing government avoided using this central concept of the EU’s 2016 Global Strategy.

At the beginning of September 2021, however, the German Defence Minister Annegret Kramp-Karrenbauer, admitted: “We were dependent on the Americans in Afghanistan”, and that it is necessary to define “what it means in concrete terms to be really capable of acting on a European level”. Less than 10 days later, Paris called on its EU partners again to “raise loud and clear the issue of European strategic autonomy”.

Are Afghanistan and AUKUS turning points?

France is furious with the US and Great Britain for having joined forces with Australia to form an Australian-United Kingdom-US alliance (AUKUS), expanding military influence in the Indo-Pacific. France was not involved, although it entered a strategic partnership with Australia in 2016. This decision reminds Paris of the President Trump era, who showed little respect for his most important allies. In a joint communiqué, France’s Foreign Minister Jean-Yves Le Drian and Defence Minister Florence Parly stated on 16th September: “The American decision, which leads to the exclusion of a European ally and partner like France from a crucial partnership with Australia at a time when we are facing unprecedented challenges in the Indo-Pacific region, be it over our values or respect for a multilateralism based on the rule of law, signals a lack of consistency which France can only notice and regret.” French President Emmanuel Macron even ordered his country’s ambassadors in Washington and Canberra back to Paris for consultations on the matter – a unique event among allies.

Can the debacle in Afghanistan and the AUKUS incident lead to Franco-German cooperation intensifying further?

A pacemaker with a handicap

It goes without saying that the Franco-German relationship must be the nucleus of any European defence integration. What was true in the past holds true in the area of great-power rivalry: a truly joint Franco-German approach in the area of security and defence policy could be the starting point of a European project. Conversely, only a strong committed bilateral relationship uniting interests in a common global strategy will enable the EU and Europe to confront the present threats and challenges. However, a look at the recent cooperation between the two countries makes it clear that this can only succeed if both sides have the courage to do so. The year 2017 saw the Franco-German couple rise anew. Although the two countries held national elections, Berlin and Paris left no doubt about their wish to re-boost their bilateral relationship and their determination to play a leading role in defining the future of the European project “under threat”. Security and defence, an area of politics where France and Germany certainly differ, became one of the main axes of their agenda. The United Kingdom’s decision to leave the EU made them realise that there was room for quid pro quos on security and defence. And since cooperation with US President Donald Trump was largely impossible, the two countries seemed to have drawn the same conclusion: Europe can no longer rely fully on the United States, it has to reflect on its strengths and take its fate into its own hands. France and Germany thus gave fresh momentum to their security and defence policy cooperation and finally gave a boost to the CSDP. The ambitious military capabilities that the two countries intend to develop and procure together – above all the Future Combat Air System (FCAS) aircraft and the Main Ground Combat System Tank (MGCST) – should contribute to the EU becoming a globally capable actor in security and defence in the sense of the Treaty of Aachen signed in January 2019, which stipulates “strengthening Europe’s ability” to “act independently.”

Against the background of this intensified cooperation, numerous observers were amazed in winter 2020 when President Macron and Minister Kramp-Karrenbauer publicly presented two completely different ‘development paths’ for European security policy. The German defence minister called the idea of European strategic autonomy an “illusion” and the French president pointedly countered that this was a “faulty interpretation of history.” Kramp-Karrenbauer responded that Europe’s most important ally in security and defence policy remained the United States, and that without its nuclear and conventional capabilities, Germany and Europe could not protect themselves. For her, these were the sobering facts from which conclusions for the EU had to be drawn. With Trump voted out of office and a policy change in the United States looming, it has become clear that France and Germany based their joint call for greater European capacity to act and strategic autonomy on different motives, and that they have associated very different operational scenarios with it.

This ‘conflict’ also highlighted the greatest weakness of Franco-German cooperation in foreign and security policy: cooperation and joint proposals are almost exclusively linked to capabilities, sometimes at industrial levels. This also holds true for the Franco-German proposals presented since 2017, which are important steps forward. However, they need to be embedded in a further-reaching political dialogue on the ways in which they may serve the overall objective of strategic autonomy. The pre-condition for any successful Franco-German cooperation – bilateral, European or within the framework of the EU’s CSDP – is a common strategic understanding.

This goal can best be reached through a Franco-German White Paper on Security and Defence, which should contain a shared analysis of the current security environment and the risks and threats it presents. Regional and functional priorities should be derived from this analysis. Based on these priorities, a joint level of ambition has to be defined.

A strategic, political dialogue between Paris and Berlin in the true meaning of the term is no easy task. Although postulated by the 1963 Elysée Treaty, it still is neglected in Franco-German security and defence cooperation. Foreign, security, and more importantly defence policy traditions are largely different in the two countries. Ideas on the role of the military and the use of force differ, as well as societies’ perceptions of their armed forces. Security and defence policy priorities do not necessarily go together either, be it in terms of threat perception, regional priorities, or readiness to resort to military action.

For France and Germany to be able to take the lead in working towards the objective of European strategic autonomy, it is first indispensable that they reach a common understanding at the bilateral level. They need to agree on both the content and the implications of political autonomy as the sine qua non dimension of strategic autonomy.

is a Senior Fellow at the EU/Europe Research Group of the German Institute for International and Security Affairs (SWP) in Berlin. Her research focuses on the CSDP, France and Franco-German relations. Ms Kempin studied political science in Marburg, Berlin, Rennes and Paris. From 2010 to 2014 she was the head of the EU External Relations Research Group at SWP and advised the German Foreign Ministry on the CSDP.