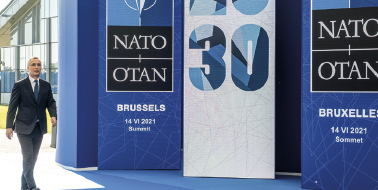 We face a challenging security environment marked by systemic competition from assertive powers, instability near Europe’s borders, terrorism, cyber-attacks, disinformation, and much more. This year, NATO leaders took the decisions needed to strengthen our Alliance in light of these threats and to prepare it for the future. At our NATO Summit in June 2021, Allied Heads of State and Government reaffirmed their unity and solidarity and agreed the further adaptation of the Alliance. President Biden also stressed the renewed and enduring commitment of the United States to NATO.

NATO’s strength lies in its ability to adapt to evolving threats and ensure the continuity of its core tasks of collective defence, crisis management and cooperative security.

NATO 2030 is a vision for preparing the Alliance to meet the challenges both of today and of tomorrow. No country, no continent can deal with these challenges alone. But in NATO, we are not alone.

NATO is a unique platform that brings together North America and Europe every day to consult on matters of security. NATO 2030 will deepen this unity by consulting on a broader range of threats. It will strengthen our deterrence and defence with more common funded resources, building on the steady increases over the past years in defence spending. It will broaden the security agenda, addressing issues such as resilience and the impact of climate change. It will ensure that Allies have reliable and resilient infrastructure and telecommunications networks. And it will see us invest in emerging disruptive technologies so that we can maintain our technological edge.

NATO 2030 is also about building new partnerships and strengthening existing ones. We will continue to work with partner organisations such as the European Union and the United Nations. Cooperation with the EU in particular is a strategic imperative. Both organisations face the same broad range of threats and challenges. A task of this magnitude can only be mastered through cooperation – between the members of the two organisations as well as between NATO and the EU themselves.

To protect the rules-based international order, we will also seek deeper relationships with countries in the Asia-Pacific, and strengthen our partnerships with like-minded democracies around the world. We will continue to support our neighbouring countries to help them become more secure.

Key to this will be the drafting of a new Strategic Concept, to be agreed at the next NATO Summit in Madrid in 2022. It will reaffirm the continued relevance of NATO’s three core tasks while adapting them to reflect the new security environment.

This year also marked the end of NATO’s longest military operation, in Afghanistan. After many rounds of consultation, all Allies agreed to follow the United States and withdraw their remaining troops. This was not an easy decision. Whether we stayed or not, we knew there were risks, be it from the return of the Taliban or an open-ended mission with further attacks on our troops.

The lessons to be drawn from NATO’s engagement, and that of the whole international community, in Afghanistan will undoubtedly feed into the NATO 2030 agenda. It will reinforce the need for broader consultations, close work with partners and greater burden sharing, among others.

Our Alliance embodies the deep, historic bond between Europe and North America. It ensures the defence of our territory, our populations and our core values of democracy, liberty, fundamental rights and the rule of law. Through NATO 2030, we are taking the steps necessary to remain strong today and to address whatever threats and challenges the future may bring.

is Assistant Secretary General for Defence Investment at NATO since October 2016. He was previously Director of the Fondation pour la recherche stratégique, the leading French think tank on defence and security (from 2008 to 2016). In this capacity, he has  contributed to several senior expert panels for NATO, EU, UN as well as for the French Government. Mr Grand has also held senior positions in the French Ministries of Foreign Affairs and Defence. He taught at the Paris School of International Affairs at Sciences Po Paris, at the Ecole Nationale d’Administration (ENA) and at the French Army Academy.