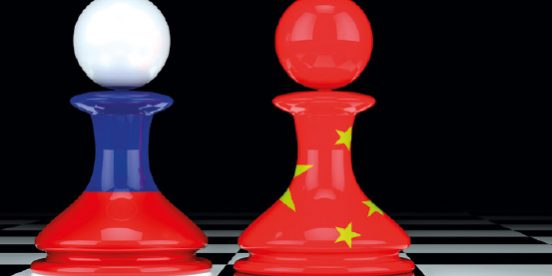 Any attempt to better understand the current relations between China and Russia and their impact on regional and global stability should consider at least four perspectives: the general shift of attention from the Atlantic to the Indo-Pacific, the rivalry between the US and China, the impact of climate change, and arms control. For some time now, the volume of the transpacific trade has surpassed the value of the transatlantic one, pointing towards an increasing accumulation of wealth in the Indo-Pacific area, which, in turn, triggers an inevitable increase of political and military attention in that region.

Russia and the rivalry between China and the US

The rise of China contributed substantially to this shift; consequently, today, Russia has been relegated to the second place in the threat analysis of both the US and NATO, after China.

This “demotion” has important potential consequences. First, Russia has not become less assertive in the North Atlantic area covered by NATO, quite the contrary (see Ukraine), indicating even a certain “competition” for attention with China (every time the Indo-Pacific takes center stage, Russia “orchestrates” something negative in the North Atlantic and recaptures the attention).

Second, NATO is facing its biggest challenge with this increased focus on the Indo-Pacific: how to continue to deal with the threat posed by Russia, thus maintaining peace and stability in the traditional North-Atlantic area, while attempting to become relevant to the situation in the Indo-Pacific, contributing to peace and security in that region, too.

The perspective to evaluate the Russia-China relationship from is the increasing competition/rivalry between the US and China. Compared to the US-Soviet competition and rivalry from the Cold War, which was a structured one with mechanisms and communications capable to avoid uncontrolled escalation, the current US-China nascent competition is still fluid, lacking those mechanisms and communications, bearing a relevant potential for miscalculation.

Compared to the time of President Nixon’s surprise visit to Beijing in 1972, when a new “triangular” relationship was established – with the US-China “tandem” confronting the Soviet Union – today the US is confronted with the “tandem” of China and Russia, based on their mutual dissatisfaction with and desire to terminate the US domination in the post-Cold War international order.

However, in this context, it is perhaps of interest to note a difference of approach towards that order between Russia and China. While the former rejects it in its entirety, China, which fully exploited it to reach its current status, is attempting to “capture” it from the interior, by trying to get control over its institutional architecture.

Third, from the climate change perspective, two factors seem to take precedence, both pointing towards an increased Russian-Chinese cooperation: first, the availability of the Siberian resources triggered by the global warming, and second, the opening of the Arctic route. China has important stakes in both but needs Russia’s permission in both cases.

If one takes into consideration that the territorial access of China to Central Asia, the Caucasus and beyond to Europe passes through the former Soviet Union territory (see the Chinese Belt and Road Initiative/BRI), one comes to the logical conclusion that Russia’s “permission” is obtainable only through a cooperative attitude on the part of China.

Forth, when it comes to arms control, here one can detect a different alignment, in which Russia has more in common with the US than with China. That is because the current generation of disarmament and arms control agreements concluded between the Soviet Union and the US during the Cold War do not cover China, which, therefore, enjoys a “free ride” in armament development, which could create problems for both signatories.

The future of stability

The strong anti-NATO declaration of Vladimir Putin and Xi Jinping at their Olympiad meeting in Beijing is not yet the creation of a military block, but it is evident that the China-Russia relationship is a powerful factor in the current international power distribution. As for the contribution of this relationship to peace and stability, although both Russia and China equate it with their opposition to the US and the current status quo, it seems useful to remember that the theory of international politics makes a clear distinction between those powers which support the status quo and those which reject it, concluding that the former contribute more to peace and stability than the latter.