Russia is not a partner, but a political opponent the west needs to reckon with 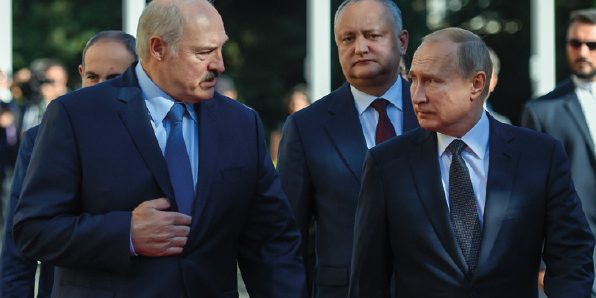 After almost eight years of conflict since Russia’s annexation of Crimea it is difficult to imagine that relations between the EU and Russia can get worse – and yet events of this winter teach us that we may not have reached the bottom. As tensions flare along the Russian-Ukrainian border and around Belarus, Russia acts from a position of strength: Moscow believes that the EU is weak and inward looking, and the Biden administration is continuing the gradual exit of the US from Europe. NATO’s withdrawal from Afghanistan is seen in Russia as inflicting severe damage to the west’s (and particularly the US’s) reputation of being a reliable ally. The takeover of the Taliban in Kabul is a challenge to Russian security but opens a window of opportunity to shape the regional order around Afghanistan.

Moscow clearly feels encouraged to push for its goals. President Putin has become much more outspoken on “red lines”. At the beginning of December, he said: “[…] we will insist on the elaboration of concrete agreements that would rule out any eastward expansion of NATO and the deployment of weapons systems posing a threat to us […].” He also accused western countries of “using the migration crisis on the border between Belarus and Poland as a new reason for tension in a region close to us, for putting pressure on Minsk. […] But Russia will undoubtedly continue its policy of strengthening ties and deepening integration with Belarus.” Two weeks later Moscow published draft treaties it wants to conclude with the United States and NATO which would stipulate an end of NATO’s open door policy and the division of Europe into an American and a Russian sphere of influence.

Since the beginning of 2021, Russian policy has been creating a triangle of insecurity along its western border. Russian troops are amassing on the border with Ukraine. Putin has said and written many times this year that Russia and Ukraine constitute a “historical unity”. Moscow has disseminated more than 600,000 Russian passports to inhabitants of the disputed territories in Ukraine’s Donetsk and Luhansk regions. It has also distanced itself from the Normandy Four Format. Russia accuses Kyiv of not implementing its obligations under the Minsk agreement. At the same time, it pursues a policy of permanent destabilisation vis-à-vis Ukraine. An escalation, intended or unintended, of the Donbas war and a Russian military invasion in eastern Ukraine cannot be ruled out in the coming months.

Ukraine’s neighbour in the north, Belarus, has turned into another hotbed of instability since the fraudulent 2020 presidential election. Moscow supports the Belarussian ruler, Alexander Lukashenko, against his own population with the aim of preventing another democratic revolution in its vicinity, but is pulled deeper into its struggle with the EU.

What makes the domestic crisis in Belarus so dangerous is Lukashenko’s strategy to “geopoliticise” it. Since the summer, the Belarussian regime has been orchestrating a migration crisis along its borders with Lithuania and Poland to pressure the EU into negotiating with Minsk and lifting sanctions. But Lukashenko is also sending signals to the east. His dependen­ce on Russia is almost complete now. Still, he fights hard for wriggle room, and the upshot is that the Kremlin supports an authoritarian ruler whose main survival strategy is to escalate the geopolitical confrontation with the west. Meanwhile relations between Belarus and Ukraine have been deteriorating as well. And the Russian troops on the Russian-Ukrainian border are perilously close not only to the Donbas, but also to the flashpoints at the Belarussian-Polish border. Russian policy jeopardises the security of the Ukrainian and the Belarussian people, and, indeed, Europe, to achieve its goal of undisputed control in its neighbourhood.

In the previous issue of this journal (https://bit.ly/3wnqAYJ), the Russian ambassador to the EU, Vladimir Chizhov, accused the Union of double standards, the non-recognition of Russian vaccines for political reasons, and a chaotic pandemic policy.                                        This is a misrepresentation of the EU’s Covid-19 policies. The EU made numerous offers for cooperation, particularly on joint research, in the early months of the pandemic. Moscow, however, preferred to focus on a national response to the virus. The approval of Russia’s Sputnik V vaccine by the European Medical Agency is not delayed by the EU’s double standards, but by problems with documentation and access of the EMA inspectors to production sites in Russia. The EU has certainly been struggling with its own response to the pandemic – but it was Moscow’s choice to politicise it instead of taking a constructive approach vis-à-vis the EU.

A similar politicisation can be observed in the area of climate change. Putin’s 2020 acknowledgement of the anthropogenic causes of climate change and the necessity of a political response had raised hopes in Brussels and some EU Member States that Russia could become a partner of sorts in the realisation of the European Green Deal. One year on, the Russian president is convinced that “our diplomacy should be more active in countering attempts by the European Union and the United States to assume the right to dictate the climate agenda single-handedly”. In light of the current security crisis, constructive cooperation on climate change is not a likely option.

Finally, EU-Russia relations suffer from the Russian leadership’s loathing for liberal democracy and the rules-based international order, which goes hand in hand with autocratic entrenchment inside the country. 2021 has seen severe repressions, combined with a policy of systematic extinction of political opposition ahead of the September 2021 Duma election. As the latest example, the fate of Memorial, Russia’s oldest and most important human rights NGO, seems to be sealed. With the question of Putin’s succession looming over the 2024 presidential election, no easing of tensions should be expected in Russian domestic politics or foreign policy. Antagonism with the west in a post-western world, in which Russia plays the part of a geopolitical great power, is an important pillar of the Russian political system and a key message to the Kremlin‘s domestic and international audiences.

This does by no means imply that the EU should stop trying to find ways of meaningful interaction with Russia. The country is too big, political, economic and societal ties are too important to be ignored. But it must do so based on the assumption that Russia is not a Transatlantic-European partner, as Ambassador Chizhov suggests, but a political opponent the EU needs to reckon with.

Dr phil. Sabine Fischer has been Senior Fellow at the Division Eastern Europe and Eurasia of the German Institute for International and Security Affairs (SWP) in Berlin since May 2021. Her research focuses on the foreign and security poli­cy of Russia, EU-Russia and Eastern Europe-Eurasia relations. Since 2021 she is, amongst other functions, Member of the Europe/Transatlantic Advisory Board of the Heinrich Böll Foundation and Member of the Executive Board of the German Association for East European Studies (DGO). Before taking up her current post, Ms Fischer was Team Leader for the Public Diplomacy – EU and Russia Project at the Goethe Institute in Moscow.